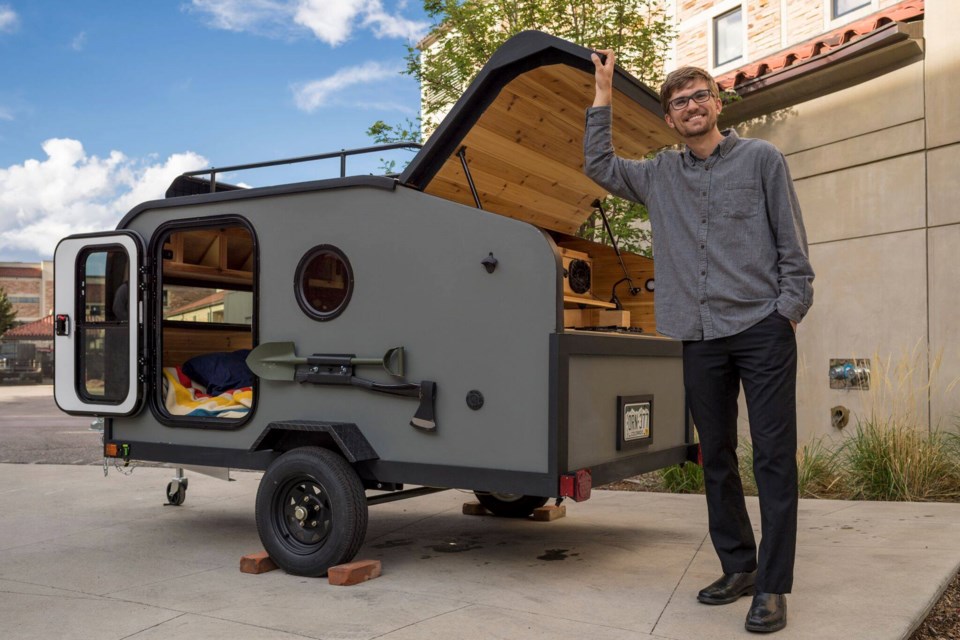 Tommy Hoffmann, founder of Colorado Campworks, with one of the company's campers. (Courtesy photo)

This year, outdoor experiences have been the choice for summer vacationers. With traditional camping spots filling up months in advance, and travelers seeking new places to explore, plenty of campers are planning trips to off-grid experiences.

Colorado Campworks, a new Longmont company, is looking to make backcountry camping easier and more approachable for those who haven’t tried it before. It has developed a durable, solar-powered camper that’s as ready to get into nature as most Coloradoans. The campers add in modern conveniences that typical backcountry campers go without. Things like toilets, hot showers and cooktop stoves.

The company has strong local roots. Tommy Hoffmann, a Longmont-raised, Niwot High School graduate, started the company in 2019. He worked for a time at the luxury camping manufacturer, Earth Roamer. His love for the outdoors, as well as his degree in environmental design from the University of Colorado Boulder, are apparent.

Hoffmann started the company from a love of the outdoors that has its roots in family explorations during his childhood.

“Once we went to Steamboat for a family vacation and my older brother, Chad, taught me and my younger brother how to rock climb, not to be afraid of heights, to walk across a mountain creek via a fallen log, and just enjoy the outdoors without being afraid of it,” Hoffmann said.

He also talked about getting inspiration from an aunt who died this past summer. She took his family to beaches, the mountains, and most memorably Moab and Canyonlands national parks. He loved his adventures but was disappointed his aunt wouldn’t camp.

“I like to think our Nomad camper could have convinced her, though outdoor showers still would have made it a tough sell,” he said.

Following his childhood adventures, Hoffmann grew to become a road trip veteran with a healthy wanderlust, taking three West Coast road trips — one of which involved living out of a van for the summer. He built his first camper for himself and when he came back from using it on his trip, immediately wanted to create another. Ultimately, that led him to found Campworks.

Because he knows firsthand what campers want on the road, there’s not too much missing. The campers are 100% solar-powered electric with hot and cold running water, a rear kitchen pullout feature, shovels, and other backcountry camping tools.

Customer Jim Weatherwax, who works in Longmont, used a camper on a Wyoming fishing trip he took with his wife at the end of July. He fished for a week off the grid, about 35 to 40 miles from any kind of meaningful services.

He towed the camper with his truck and uncoupled them when he reached his site.

“We took the truck wherever we wanted, and when we came back everything was charged up and ready. We also installed a freezer for our food and for ice for our cocktails,” he said.

Campers sleep up to five both inside and in a tent that folds out on the roof of the structure. The vans are designed to be affordable when compared to similar campers. Costs for purchase tops out at $44,000, which includes everything a camper could want ranging from an induction cooktop to Pendleton blankets and custom features. Customers can even add a grill to the front of the vehicle.

Given new demands connected to COVID-19, the company started renting its campers for prices that are about as much as the cost of a hotel room. Hoffmann hopes the rentals will ultimately fund the production of more vehicles.

To date, business has been relatively strong, and the company is planning a move to a larger space in Hygiene so it can increase production and create a rental fleet that’s ready for next summer. Even the larger space has local roots and a connection to Hoffmann’s history. It was first used by his uncle as part of his business fabricating induction plastic parts. That kind of coincidence only boosts his enthusiasm for the business.

Ultimately, Hoffmann said he hopes his campers can help people get out and enjoy the world without having to have a set plan and book hotels.

“When people go camping, it’s funny how they define what a camping trip is. There’s never been such a varying degree of what it means to camp. I have friends going backpacking to climb a 14er," he said. “That’s camping to them. We want to help people enjoy backcountry camping with a great experience. Off-grid camping is a great, great time. I highly recommend it.”

Treat for downtown businesses: Some Main Street barricades will remain in place until Halloween
Sep 24, 2020 10:05 AM

Innovate Longmont fall accelerator program launching with six local startups on board
Sep 21, 2020 7:00 AM
Comments
We welcome your feedback and encourage you to share your thoughts. We ask that you be respectful of others and their points of view, refrain from personal attacks and stay on topic. To learn about our commenting policies and how we moderate, please read our Community Guidelines.