"The new bridge will be longer and the channel underneath deeper, the end result of which will be a bridge better able to withstand higher flood events than what we have today," said Tom Street of the City Public Works and Natural Resources Department.
0
Sep 19, 2019 12:00 PM By: Anthony Maine 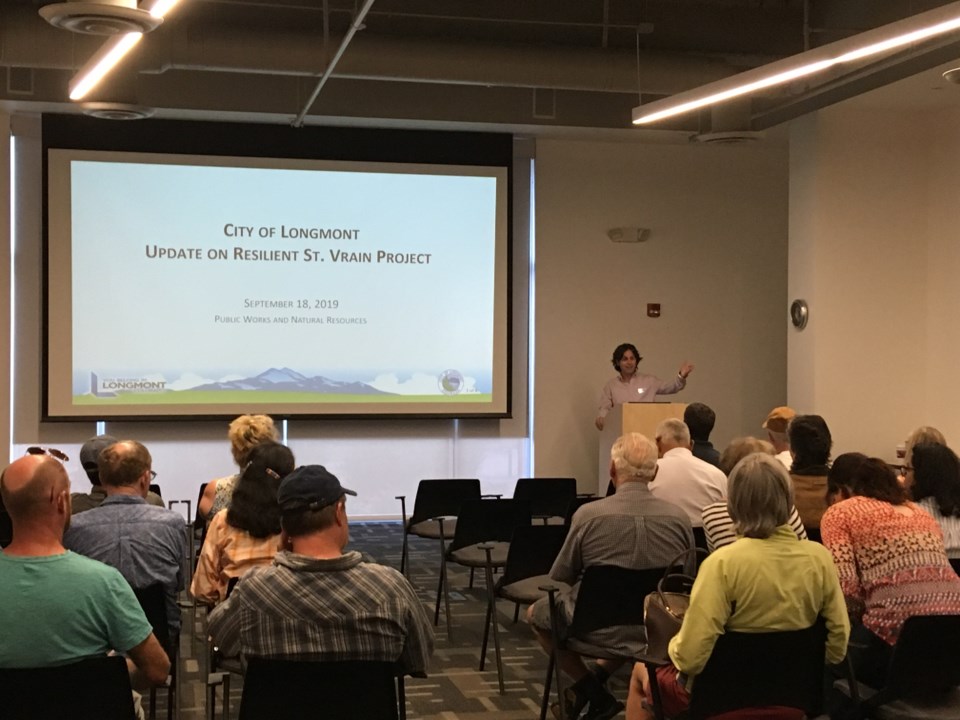 Over 30 residents, city and federal employees, and consultants gathered on Wednesday night at the Longmont Museum to learn about plans by the Army Corps of Engineers (ACE) to replace the Boston Avenue bridge over the St. Vrain Creek.

The project will cost approximately $15 million and construction is tentatively planned to start in 2021. The project is part of the much larger effort by the city called Resilient St Vrain (RSV) to restore the St. Vrain Greenway and protect people and property from future floods.

Based on a feasibility and environmental assessment study recently completed, the ACE project is specifically focused on replacing the bridge on Boston Avenue where it crosses South Francis Street. If approved, the federal government will pay for $10 million of the project through section 205 of the 1948 Flood Control Act.

"The Corps has 2 streams of funding for flood mitigation. There's direct project funding with no limit in scope. The other stream is what we call Section 205 funding that ranges from $5 to $15 million," explained Greg Johnson of the US ACE.

"This project is unique in that we wanted to figure out how to fit into the larger RSV vision and still meet ACE requirements for project funding. It took a lot of brainstorming on everyone's part to make it work," Johnson added.

Once completed, the bridge will be bigger and better based on the current plans.

"The new bridge will be longer and the channel underneath deeper, the end result of which will be a bridge better able to withstand higher flood events than what we have today," said Tom Street of the City Public Works and Natural Resources Department. "There will also be several multi-modal improvements with the bridge construction. The surface sidewalks will be widened, the bike lanes will be redesigned to meet current standards, and the pedestrian underpass will be upgraded so there's less likelihood of having to close the underpass due to flooding."

The bridge project is just a portion of the overall RSV plan.

"RSV is a $140 million project. To date, the city has funded about $60 million of that, so with the $10 million from ACE for the Boston Avenue bridge project, that will bring us about halfway there," estimated Josh Sherman, project manager for RSV. "The 5 million for the city's match will come out of the transportation fund, which comes from the sales tax," Sherman added.

With any big project like this, there are concerns about relocations of homes or businesses. Sherman assured that will not be case for the Boston Avenue bridge project.

"I commend the city for the creative efforts they have used to keep the project going over the last six years. Working with the city has been a great partnership," Johnson said.

The public is encouraged to submit any feedback to the ACE on its plans for the bridge by October 4th, either by email or by sending a letter to ACE.

Longmont Weather Forecast 5/31-6/1/2020
Jun 1, 2020 9:52 AM
Comments
We welcome your feedback and encourage you to share your thoughts. We ask that you be respectful of others and their points of view, refrain from personal attacks and stay on topic. To learn about our commenting policies and how we moderate, please read our Community Guidelines.