The new signs also will be installed at designated intersections and alleys serving as the new bicycle detour routes
Apr 10, 2021 12:00 PM By: Monte Whaley 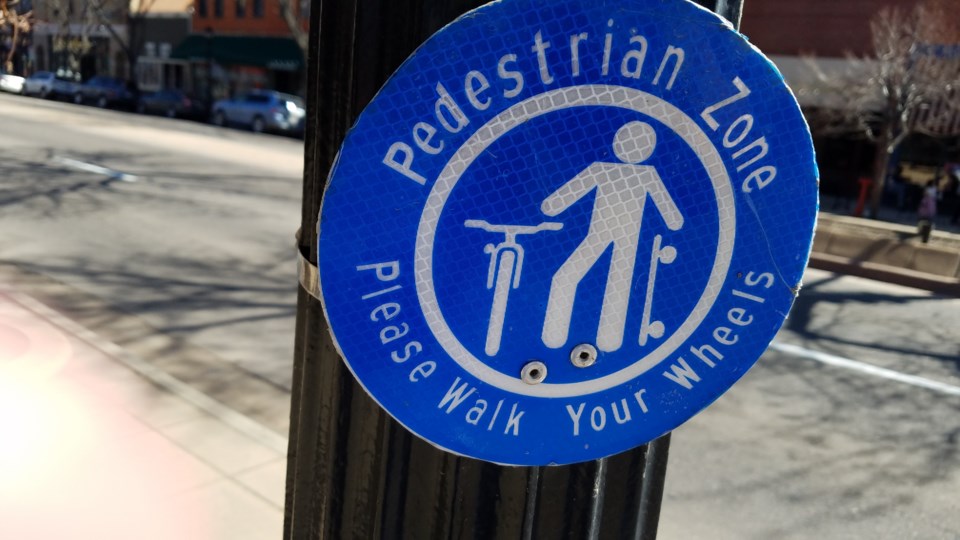 Longmont officials say they want to make it easier to navigate the new Main Street Dismount Zone for bicyclists, scooter riders and skateboarders.

The city, this month, is unveiling a $16,000 Longmont Main Street Bicycle Wayfinding Project which creates road markings and street signage for motorists, bicyclists and pedestrians along designated sections on Main Street. The new signs also will be installed at designated intersections and alleys serving as the new bicycle detour routes, said Phil Greenwald, Longmont’s transportation planning manager in an email.

Over $14,000 for the project comes from the Colorado Department of Transportation while Longmont chipped in over $1,450 in matching funds, according to a city staff report.

No signs or road markings have been installed yet as a layout plan is being finalized, the staff report said.

Longmont created the dismount zone via a new ordinance in January which requires bicyclists, as well as those on scooters and skateboards, to dismount and walk their wheels between Second Avenue and Longs Peak Avenue.

The restriction was passed to increase safety for pedestrians along Main Street and to encourage more foot traffic in the downtown area, say city officials. People who ignore the ordinance are issued warnings at first, while persistent violators face a $300 fine, according to a city webpage on the ordinance.

Most of the signs will be the typical green background with white symbols, with no words, just bicycle symbols and directional arrows, Greenwald said. Several city departments are working together to make sure the city is consistent with the new signs, he said.

“We have an agreement that the traditional green background signs will provide the best way to convey the message, on the edge of the dismount zone, of where people on bicycles, scooters, skateboarders … should travel to avoid the dismount zone,” Greenwald said.

The funding also will pay for 30 additional “inverted-U” bicycle racks for the downtown area, he said. The racks will be located concurrently with the signs, he said.

Downtown shop owners, meanwhile, say the bicycle ban has made little difference in foot traffic or in sales..

Matthew Deakin, the owner of the Public Smoke Shop, located at 341 Main St., said he’s barely noticed the restriction on bicycle, scooter and skateboard riders. “We really don’t get a huge amount of bikes down here,” Deakin said. “It’s not made much of a difference in our business.”

Lesa Hansen, who manages Crystal Joys at 372 Main St . agreed, saying the bike ban had no impact on the business. The shop closed last March due to COVID-19 restrictions, only to reopen in April 2020. It is now enjoying robust sales, Hansen said.

“People, if they want to come in, will adjust to any kind of situation,” she said.