The series will include wives and mothers, businesspeople, a soldier, an activist, and even an outlaw or two. Together they show the determination, strength, business skill, and sometimes a lack of principles, that made the city what it is today.
Jan 2, 2021 11:00 AM By: Deborah Cameron

Editor's note:This year marks the 150th anniversary of Longmont’s founding. To celebrate, The Longmont Leader is working with Erik Mason, curator of research at the Longmont Museum and author of the book "Longmont: The First 150 Years," to highlight notable individuals from Longmont’s past.

The series will include wives and mothers, businesspeople, a soldier, an activist, and even an outlaw or two. Together they show the determination, strength, business skill, and sometimes a lack of principles, that made the city what it is today.

Mary Ann Harris-Dickens came to the St. Vrain Valley in 1863, and established a hotel and stage stop where the Overland Stage crosses the St. Vrain, now modern-day Colo. 287. If she’d lived in Longmont today, she’d be known as a community leader and icon of the hospitality industry.

According to Mason, Dickens is most notable for demonstrating the resourcefulness and determination required by women who helped establish cities and towns in the American West.

Originally from England, Harris-Dickens was the mother of nine children, one of whom was William H. Dickens, founder of the Dickens Hotel and Opera House. An advanced pregnancy didn’t stop her from embarking on the crossing to North America with her husband and two other children.2 She gave birth to William during the six week transatlantic voyage.

Once in North America, the Dickens family settled first in Canada and then in Wisconsin. Times weren’t easy during this period of her life. She experienced the death of William’s older brother, the birth of another daughter, and the death of her first husband which left her with debts and a family to house and support. She operated a shoe binding business to survive and the following year married Alonzo Nelson Allen.

The couple had five more children, and Allen’s wanderlust eventually led him to leave her and the children in Wisconsin for an exploration in Colorado.1 William Henry joined him. During that time, Allen prospected on the banks of the St. Vrain and was credited with founding both the Burlington Colony and Allenspark.3

After several years, Harris-Dickens made the journey to Colorado with her children. She came partly by train and, when the rail line ended in Missouri (trains didn’t reach Denver until 1870 and Longmont until 1873), finished the journey on foot with the help of a man and his wagon pulled by oxen. She arrived at a small camp that lacked adequate room for the new arrivals.4

Mason explained how Harris Dickens turned her problem into another way to support her family. “It was really Mary who saw this opportunity to run a stage stop,” he said. “At the time Burlington was on one of the major North-South routes from Denver to Cheyenne and Laramie Wyoming. It was a good place to stop and change horses, so she ran the business for a number of years.”

Approximately two years after arriving, Harris-Dickens divorced Allen and ran her thriving business. She provided accommodations and hospitality for as many as six stages a day filled by approximately 22 passengers, teams of horses, and stock tenders as well as townspeople who wanted a meal.4

The work wasn’t easy. Harris-Dickens cooked for dozens on a sheet iron stove over pine wood and hauled ice from the river. Over time, Harris-Dickens worked with William and expanded the stage stop with an upper floor for dancing and entertainment, dining and events.4 The stage stop and hotel became a hub for the fledgling community.1 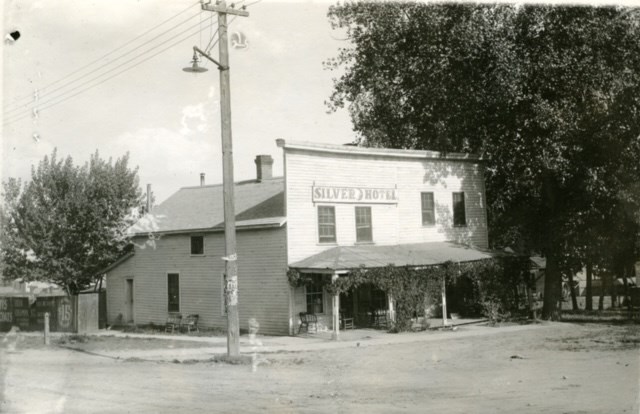 As Burlington evolved into the town of Longmont, Harris-Dickens and her family moved their lives and businesses.  According to Mason, her children established what was eventually known as the Imperial Hotel on Third Avenue and Main Street in the building that now houses Java Stop and China Panda. Harris-Dickens moved her hotel, eventually called The Silver Moon, to the corner of Kimbark Street and Third Avenue. Ten years later, William Henry upgraded the dance hall to form the now landmark Dickens Opera House.4

The hospitality businesses of Harris-Dickens and her family fostered growth in Longmont’s earliest years. Though the city has grown from its 19th century roots, the industry still plays a role in Longmont’s growth and community character.

“Longmont now has hotels, motels, camping and vacation rentals. Maintaining this spirit of hospitality is crucial to the city. It helps create a welcoming environment so visitors have a memorable experience,” said Visit Longmont marketing and tourism manager Mikayla Adair.

Harris-Dickens’ welcoming impact on Longmont’s early community was valued and, upon her death in 1905 at 89, she was widely mourned. Her funeral was held at the Congregational Church in Longmont which was packed with mourners and filled with flowers. She is buried with a simple gravestone, marked “Mother,” in Mountain View Cemetery.

2.       The Carnegie Library for local history at the Boulder Public Library

3.       The Colorado Encyclopedia entry on Burlington

4.       The memorials page of Find a Grave, an online site dedicated to history


Correction: Harris-Dickens divorced Alonzo Nelson Allen approximately two years after arriving in Longmont. That information was incorrect in the original posting of this story.

Marcia Martin wants people who work in Longmont to be able to live in Longmont
Sep 27, 2021 11:00 AM
Comments