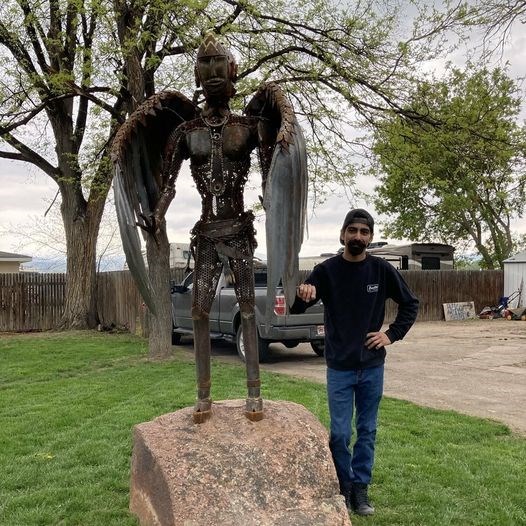 David with his Sakakawea SculpturePhoto Credit: Photos Contributed by the Artist's Family

David Abraham Flores Orozco's grandfather was a welder. Flores Orozco was born in Mexico City and moved to Pueblo, Colorado when he was 11-years-old. He now lives in Hygiene. During his childhood, he joined his grandfather and other welders at their worksites. They always told him, "don't look at the light."

That warning  — that spark —  intrigued him and led to a lifetime love of metalworking.

After welding for over 15 years, this metalsmith finally achieved his long-awaited dream of creating his first public sculpture.

His sculpture, "Sakakawea," is located at The Mountain Fountain, a corner store and bakery,  in Hygiene.

The word Sakakawea comes from the Hidatsa word for Bird Woman. But, this sculpture is not specifically inspired by the Shoshone woman known for her role in the Lewis and Clark voyages. In this case, the name is meant to honor the idea of “angelic” beings that resemble birds.

"In my mind, I was not naming her for the Native American woman that helped Lewis and Clark, but more through the belief that there are angelic beings that resemble birds because they fly," Flores Orozco said.

Flores Orozco doesn't necessarily call himself spiritual but has a fascination with history as well as mythical beings. However, he has the belief that the way a person treats things is the way that person will get treated, so to care for and honor objects is vital.

"One time I heard a story about the Japanese that when they no longer needed a pair of boots, they would give thanks before throwing it to the trash, rather than just disposing of it without care," he recounted. "So, to me, putting certain care to things is a way of connecting with them; not that there's any living connection there but maybe I can manipulate it more easily when I try to understand it."

Manipulating metal is no easy task but that's exactly why Flores Orozco is passionate about it.

"The challenge — making the shape that I had in mind happen — was the main drive toward getting to a place I didn't know really existed," he said.  "When I started the project, I had no idea how to get the shapes that I wanted out there."

His wife, Liliana Resendiz, a Zumba instructor, said he's at his best when he's creating.

"He always has had this passion to create and is always doing something, fixing something or creating something. It brings him joy, just as much joy as I have when I dance," she said.

Even in his youth, Flores Orozco created. Back then, he drew a lot and even won a city-wide drawing contest in Mexico City, Distrito Federal. He also dabbled a bit in jewelry making, although he doesn't do much of that these days, except for some little surprises for his wife.

"When I was working in the shop sometimes I would take time at work and sneak the chance to make pieces for my wife. One time I made her a heart out of scrap pieces of pipe."

Flores Orozco hopes to leave a legacy for his children, one of whom he has begun teaching to weld.

"Metal is a long-lasting material. So, to me, it's something that might just be here for a while after I'm gone. It's more of a legacy, trying to leave something that my next generation might be able to enjoy. That's another drive for me. It's not really fame, but more of the exposition of my work; the chance to be remembered and honored throughout your life and beyond," he said.

To view more of his work, head over to his Instagram, #DAFO Metalsmith or visit his website at dafometalsmith.com.