“All kinds of data is showing that the largest growing population of farmers is young or first-generation (people) who went to college and then decided they wanted to get into farming"
Apr 6, 2021 10:00 AM By: Silvia Romero Solís 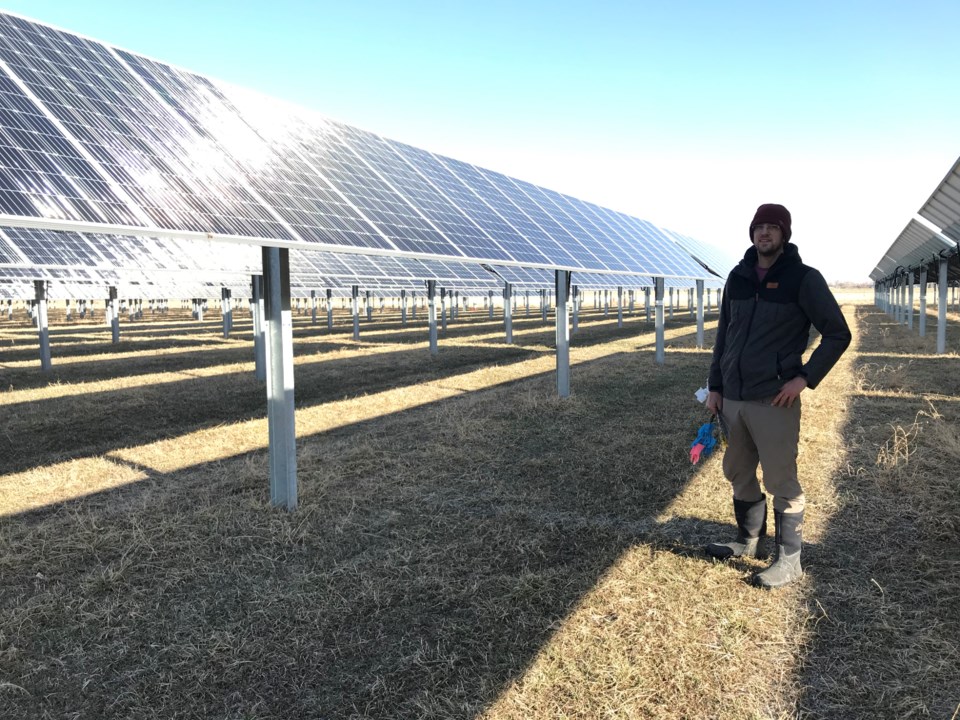 Jack’s Solar Garden, a community solar panel garden that launched its operations in Oct. 2020, will be home to the largest agrivoltaics projects in the country in partnership with Sprout City Farms, a Denver-based urban agriculture nonprofit.

On Apr. 17, Spout City Farms will host a public groundbreaking ceremony at the Longmont-based solar garden to turn the first sod for a farming project that will cultivate a majority of the land under the 3,200 solar panels.

With the support of research partners such as the University of Arizona, Sprout City Farms will be spearheading a large scale organic crop cultivation project under the solar panels at Jack’s Solar Garden to find sustainable ways farms can harvest both crops and the sun as sources of revenue, according to the website.

Byron Kominek, Jack’s Solar Garden owner and manager, described the project as “priceless,” adding innovation in the agrivoltaics field, the mix between agriculture and renewable energy production, can have significant impacts in local communities.

“Our local government is pushing more and more for 100% renewable energy and we will not be able to cover all roofs with solar (panels) and even if we do, we will not cover all of our energy needs,” he said. “We will need to put solar panels on land and basically a majority of land that is available and cheap is farmland.”

The partnership with Sprout City Farms will show how solar panels can be integrated with ranch land and what the benefits for both may look like, he said. “I think this is one of the tools that society can use moving forward to reduce the effect of climate change.”

The Sprout City Farms has been working across the Denver metro area for over ten years building urban community farms in partnership with different institutions, according to Meg Caley,  founding farmer and CEO of Sprout City Farms. Some of these partnerships include Denver Public Schools, the city of Lakewood and the Mental Health Center of Denver.

This will be the fourth and largest farm site, five acres, the nonprofit will break ground on.

“In terms of agrivoltaics, (this will be) the largest site for vegetable production in the country,” Caley said. “We are really trailblazing here, and being a nonprofit with a focus on education we feel that it’s a good partnership for us to pave the way in this area… and share our findings and policies and procedures for others interested in participating in agrivoltaic projects.”

Since the inception of the nonprofit, the vision has been to make farming a more viable career for first-generation farmers lacking the network, resources and capital to get started, Caley said.

“All kinds of data is showing that the largest growing population of farmers is young or first-generation (people) who went to college and then decided they wanted to get into farming … It’s really hard to make a living on farming anyways, the margins are razor-thin, it’s even harder to get started and make it,” she said.

The groundbreaking will be the first step toward carving out part of the field under the solar panels into incubator plots for farmers-in-training to get real-life experience as they start their careers, according to Caley.

“They can start to lay out business plans under the mentorship of experienced farmers. We will have farm staff there, and resources and tools to share with beginner farmers so they don’t have to worry about capital and infrastructure, and can learn from watching by being co-located with others,” she said.

The first year of the project entails mostly infrastructure for the farm to test out crops, but Caley still expects to get enough food to start a community-supported agriculture, or CSA, program. The CSA will benefit local low-income families who qualify for SNAP and WIC benefits at no cost.

The remaining food, or about half the yielded crop, will go to the Longmont’s Farmers Market to share with the larger community and to educate others about the project..

“The program we will be running this year may look different in the future,” Caley said. “We decided to kick off making sure those weekly food baskets go to SNAP and WIC (eligible) families to get going, and in the future, we plan to have a more traditional CSA program.”

To register for the free, in-person groundbreaking event on Apr. 17, click here.