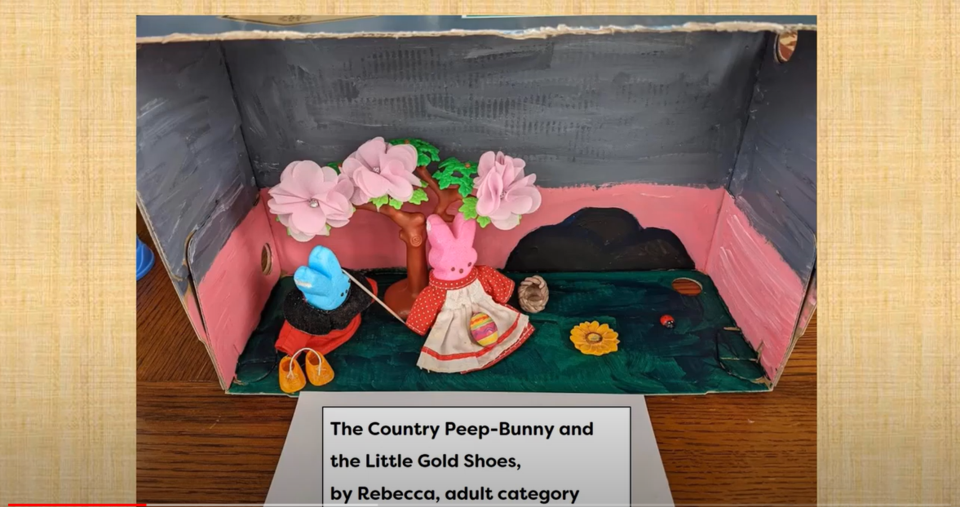 Eastertime is more than finding eggs at the Longmont Library, it is a time for Longmont residents to dive into their favorite stories and create a diorama out of marshmallows, specifically PEEPs.

This year marks the seventh year the Longmont Library has hosted a PEEPs Literary Diorama Contest. In past years entries were displayed for a week in the library’s lobby for a week. Due to the pandemic, the past two years have only accepted online entries.

This year, 27 residents entered into the contest among seven different categories, according to a news release from Longmont Library.

Voting for the contest took place from March 26 to April 1 on the library’s Facebook page.

The library announced the winners on Friday to include:

Residents of all ages participated in this years contest. The winners of the Best Diorama Title went to a group of children, Teresa Myers, marketing and communications manager for the Longmont Library said.

Etta, one of the winners, last name not provided, submitted a piece on her own. When her school pod learned about the contest and Etta’s entry they asked to join in. Etta withdrew her entry and the group worked together and submitted a new one, Myers said.

Winner of the Best Adult Diorama, Chris Wrobel, decided upon a Seussian theme to encourage reading among “smaller PEEPs” and to allow him more freedom with his design, Wrobel said.

Wrobel originally thought the project would be simple and joined to have something else to do during the pandemic. He quickly learned that it wasn’t as easy as he had planned but learned some tricks to ensure smoother sailing next year.

“The experience was more challenging than I initially anticipated, I learned PEEPs dissolved when subjected to certain glues and relatively few adhesives worked.  I found frosting as a suitable alternative for adhering PEEPs.  Next time I will definitely test elements before I prepare them to be part of the diorama.  While I love my final design, the diorama I planned seemed more elaborate in my head than what I produced with the final execution,” he said. “I gained a deeper appreciation for the artistry behind the creation of a PEEP diorama.”

This annual event has become a longtime favorite for the Longmont Library. Next year will be no different. The rules are simple, create a diorama based on a theme from any book. Simply use a shoebox or other cardboard support and include one marshmallow PEEP in the creation.