Your kids, that is why we do it. That is exactly why we do it. There are kids out there in this community, we don't want that stuff here, none of us do. We are pretty passionate about that.
Sep 20, 2019 3:00 PM By: Macie May 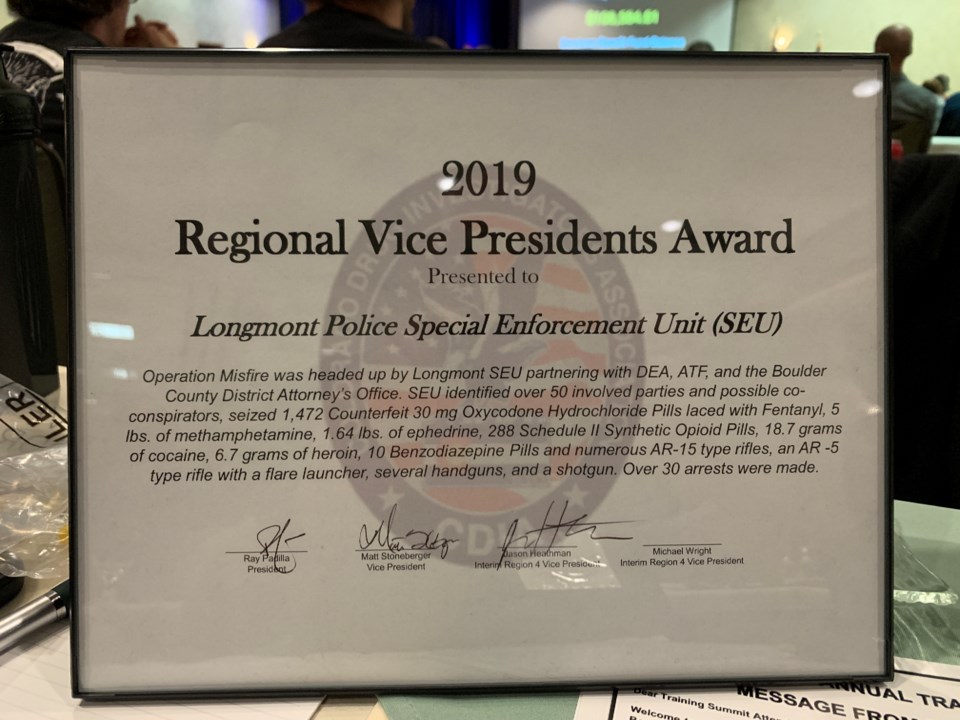 Longmont's Police Special Enforcement Unit found itself in a 15 month-long investigation that resulted in cracking a major narcotics ring in Northern Colorado.

The investigation resulted in the discovery and arrest of 30 people tied to the criminal activity.

This case required that the Longmont SEU work with other agencies at local, state and federal levels to uncover the extent of the criminal organization.

The investigation asked police officers to spend "unaccountable" hours away from their families in the name of duty. Often this required long days that included 16-hour stakeouts.

For the intense and unique investigative work, and the teamwork involved in the investigation, the Longmont SEU was awarded the 2019 Regional Vice Presidents Award.

This award was given at the annual Colorado Drug Investigators Association recognizing awardees in a room of their peers.

"It is quite an honor to be recognized by your peers for the work that you have done," states SEU Sergeant Paul Campbell.

For the Longmont SEU, this award means a pat on the back for the men and women who worked tirelessly to get drugs such as counterfeit oxycodone hydrochloride pills laced with fentanyl, methamphetamines, ephedrine, opioids cocaine, and heroin off the streets. However, it means much more to them to have done so.

"Your kids, that is why we do it. That is exactly why we do it. There are kids out there in this community, we don't want that stuff here, none of us do. We are pretty passionate about that," states Campbell.

Above all, this award recognized the teamwork and collaboration demonstrated by the Longmont Police Department Special Enforcement unit to work with "anybody and put what time it takes" to get the job done, states Campbell.

While the award itself may mean recognition for Longmont's SEU officers their impact from this case on Longmont has been significant.