In light of the announced president-elect Joe Biden, demonstrators in support and against the presidential election outcome made their voices heard in downtown Longmont this afternoon. Protestors have long been separated by Main St.
Ali Watkins
Nov 8, 2020 12:00 PM
Previous Next
1 / 1 A group of demonstrators on Saturday afternoon protested against the 2020 presidential election results on Main Street and 6th Avenue. The small group was across the street from Longmont residents celebrating Joe Biden winning his bid for the presidency on Nov. 7. Photo by Ali C. M. Watkins
Expand
Previous Next

In light of the announced president-elect Joe Biden, demonstrators in support and against the presidential election outcome made their voices heard in downtown Longmont this afternoon.

Protestors have long been separated by Main St. and political beliefs. Shortly after the inauguration of President Trump in 2017, a collective known as Longmont Leads with Love began holding vigils near Sixth Avenue and Main St. every Saturday afternoon. Kathy Patridge, an organizer for the group, said that it’s a continuation of an anti-war group during the Iran–Iraq War that met at the same spot.

Early this year, an opposing group Longmont Leads with Logic started gathering on the eastside of Main Street.

Partridge said that tensions have risen in the last six months, but there was never an intention for an “us against them” dynamic. However, she does believe that the With Logic name is a direct parody of the With Love group and that the gathering is meant to antagonize them.

Both groups have claimed that the other has intimidated each other.

There was little silence between cars honking from traffic traveling north and south on U.S. 287, cheering and shouting. Passerbys stuck their hands out of their vehicles to wave, give a thumbs up or flip off both groups. State Rep. Sonya Jaquez Lewis, who won her bid for Senate District 17, can’t count the amount of times she stood on the west side of the street in support of the With Love party.

She donned a Biden-Harris mask, and led the group of around 35 people in chants “America won!” and “This is what democracy looks like.”

The With Love group organizers requested that participants celebrate the election results in their cars and to drive down Main St. with signs. But, the vigil has a life of its own, Partridge said. She estimated that another 20 people were in the caravan.

When she heard that Joe Biden was elected president, she cried.

“We’ve been waiting for four long years for the people's voice to be heard and this election is the most consequential election in my lifetime,” Jaquez Lewis said. “This election is for women. It's for the Latinx community. It's for Black Americans. It's for LGBTQ folks who have had to sit back for four years and basically told by the President of the United States that we don't matter, and this election changes all of that.”

She believes that the Biden and Vice President-elect Kamala Harris will be the best administration to minimize political divisions.

Across the street, 10 people protested against the election results. Organizers for With Logic were not present or respond to requests for comment. Some demonstrators were affiliated with With Logic while others were independently protesting.

Gerry Santiago, Longmont resident, held up a Trump-Pence campaign sign towards the street. Though he’s attended a handful of the Saturday gatherings it’s the first time he’s publicly held the sign.

Santiago wasn’t a strong supporter of the president prior to Nov. 3, but agrees with Trump’s claims of a rigged and fraudulent election.

“I've had my own mixed feelings with Donald Trump, and I've never held a Trump sign ever, because... there were some things about him I still was a little skeptical of but I'm beginning to see what he's been saying is true,” Santiago said. 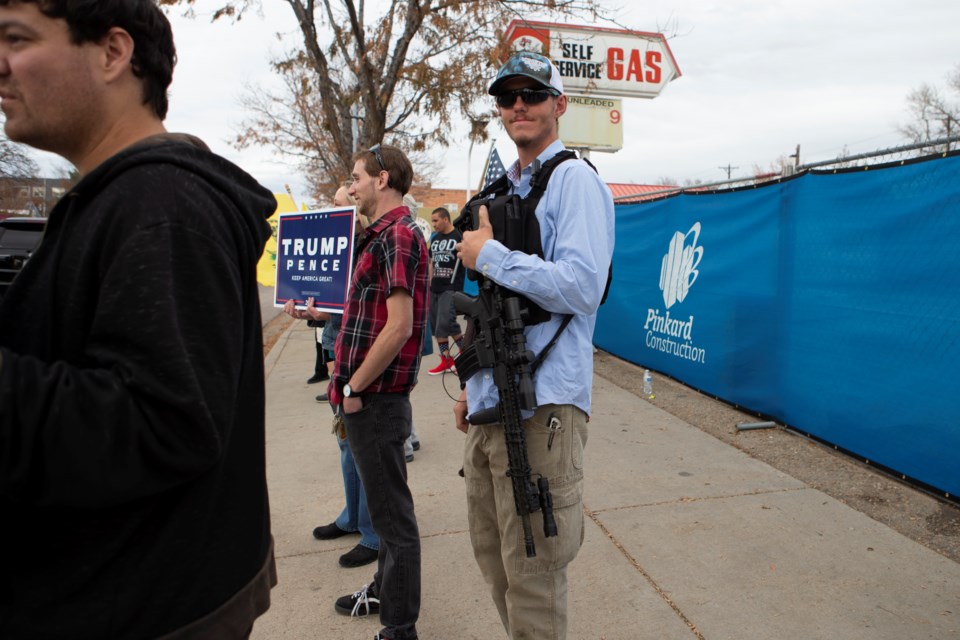 "Zech Werner," an El Paso County resident joined protesters against the 2020 presidential election results on Nov. 7 in downtown Longmont. He brought his AR-15 and a semi-automatic pistol to provide security. Photo by Ali C. M. Watkins

One man had a vest with an AR-15 and a semi-automatic pistol drove from his home in El Paso County to provide “security” for the protestors. He only provided the nickname, Zech Werner.

Werner said that he was not a huge Trump supporter but his personal beliefs — the right to bear arms and anti-mask sentiments — aligned more with the east side of the highway. He added that he hopes that there will be a civil discourse between the divided groups.

Though not every demonstrator on the east side of Main Street were supporters of the presidency, they all shared the same sentiment: the election isn’t over.

As of Saturday evening, Biden has won 290 electoral votes, 20 more than the need to win the presidency, according to the Associated Press. Alaska, South Carolina — which are leading Trump — and Biden-leading Georgia have yet to be called, leaving only 34 votes on the table. AP called the president-elect early Saturday morning. 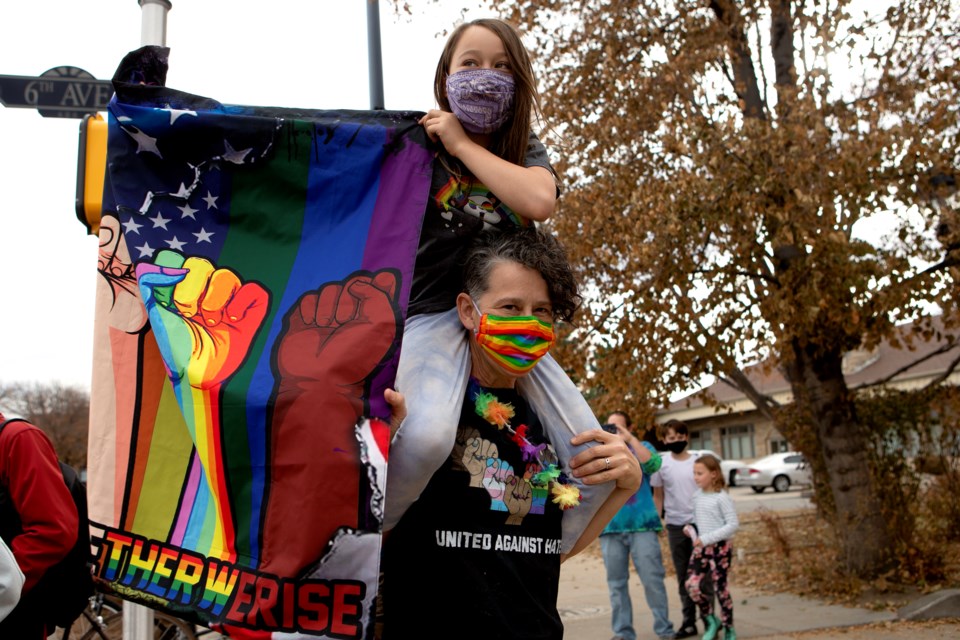 Olympia Powers-Samplonius, 9, sits on her mother Catherine Power's shoulders while holding a "Together we rise sign." on Main Street and 6th Avenue on Nov. 7. Photos by Ali C. M. Watkins

Catherine Powers, who is in a gay marriage, held her 9 year old daughter Olympia Powers-Samplonius on her shoulders during the rally Saturday. Olympia held a rainbow flag with the words “Together we rise.”

Powers was at the grocery store when her wife, Anne Samplonious, texted her that Biden was the president elect. Her eyes began to well up as she described feeling like her family has been under attack throughout the Trump administration. Powers also is an educator at a bilingual middle school in Boulder, she said, and has several Latinx students. There she hears the struggles her students have confessed under the Trump administration.

“Our family has felt under attack for the previous four years. My students have been under attack. My students’ parents are being deported left and right and I can't take another minute of this presidency,” she said.

Partridge said that Longmont Leads with Love will continue its vigils even after Trump leaves office. Over the years, the group has held events for other causes, most recently supporting the Black Lives Movement.

“The reason we're vigiling isn't just specifically anymore to address the behavior of one left-field, president, but to deliver a message to Main Street about values and choices that we can make,” Partridge said.