Staff during Tuesday’s city council meeting detailed efforts for homeless support as part of a review of a new ordinance that bans RVs and sleeper vehicles from public streets and rights-of-way.
Jan 13, 2021 1:53 PM By: Monte Whaley 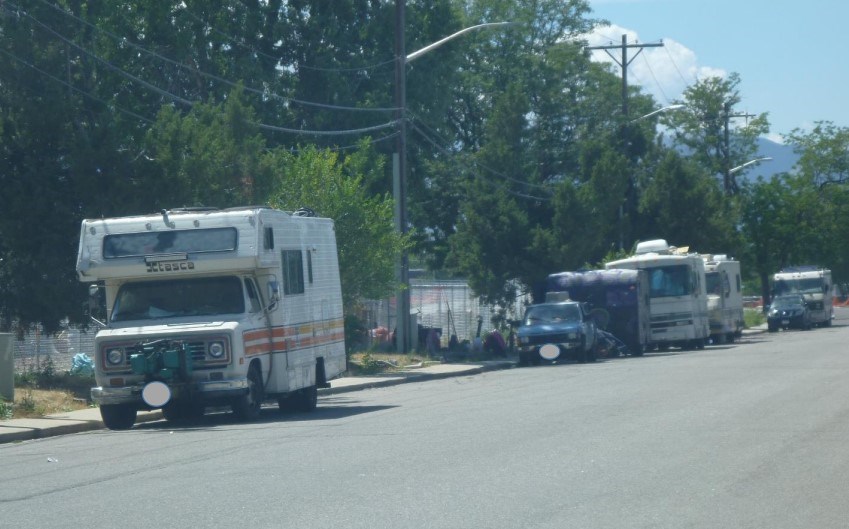 An "RV caravan" parked on a Longmont street in 2019. (Photo courtesy of Longmont Police Department)

New programs aimed at helping the homeless in Longmont also will be directed to aid recreational vehicle dwellers find more permanent homes. Among the efforts is a street outreach team that will meet and help people living outside find the programs they need.

City staff members during Tuesday’s city council meeting detailed efforts for homeless support as part of a review of a new ordinance that bans RVs and sleeper vehicles from Longmont public streets and rights-of-way. A majority of city council voted for the ban in November, at the urging of police and code enforcement officers who said too many junked and abandoned RVs were being left on city streets.

Staff members, along with Homeless Solutions for Boulder County, Longmont’s Homeless Outreach Providing Encouragement, or HOPE, and the Boulder Shelter for the Homeless started an educational program that includes a bilingual flyer explaining the ordinance. The flyer also explained the coordinated entry system in Longmont, which matches homeless individuals with services and help, according to a city staff report.

Eliberto Mendoza, project coordinator for Longmont Community Services, told council the efforts since November seem to be working. There is a decline in the number of RVs in typical “hot spots” in the city, Mendoza said.

Longmont also sought new options to help people who are living in their RVs by circumstances rather than choice. A $151,000 grant from the state connected to the federal COVID-19 CARES Act will cover the cost of a street outreach team in Longmont, Mendoza said.

Longmont will replicate a street outreach model used in Boulder. A three-person team made up of a homelessness services provider, a mental health professional and a peer advocate — someone who has once been homeless — later this month will begin meeting and talking to the homeless in Longmont, Mendoza told council.

“This is one of the biggest things we can do is build relationships,” Mendoza said. “This is a big priority to increase that level of engagement, to build trust.”

Longmont also will use temporary bridge housing to support people as they transition from homelessness into longer-term housing, he said. As part of the $40,000 program, people could move into hotels as long as they are enrolled in the coordinated entry process.

Boulder County also allocated $25,000 for the “hoteling” of homeless looking for more permanent housing. The county made the funds available as an alternative for RV dwellers to use the Boulder County Fairgrounds for temporary bridge housing, Mendoza said.

In all, Longmont and Boulder County are spending $456,000 in one-time funds to help people experiencing homelessness or who are living in their RVs and looking for brick-and-mortar homes, the city staff report states.

Councilmember Aren Rodriguz said he hopes the funding also will be used to help people who want to stay in their RVs find a spot to park and legally live in their vehicles.

If they are still willing to go into the coordinated entry process, “we can find them a place to put their RVs,” Rodriguez said.