Starting slow with a reduced number of children, the school hopes to reach 50 students in the fall.
Jul 19, 2020 6:00 AM By: Matt Hagerman 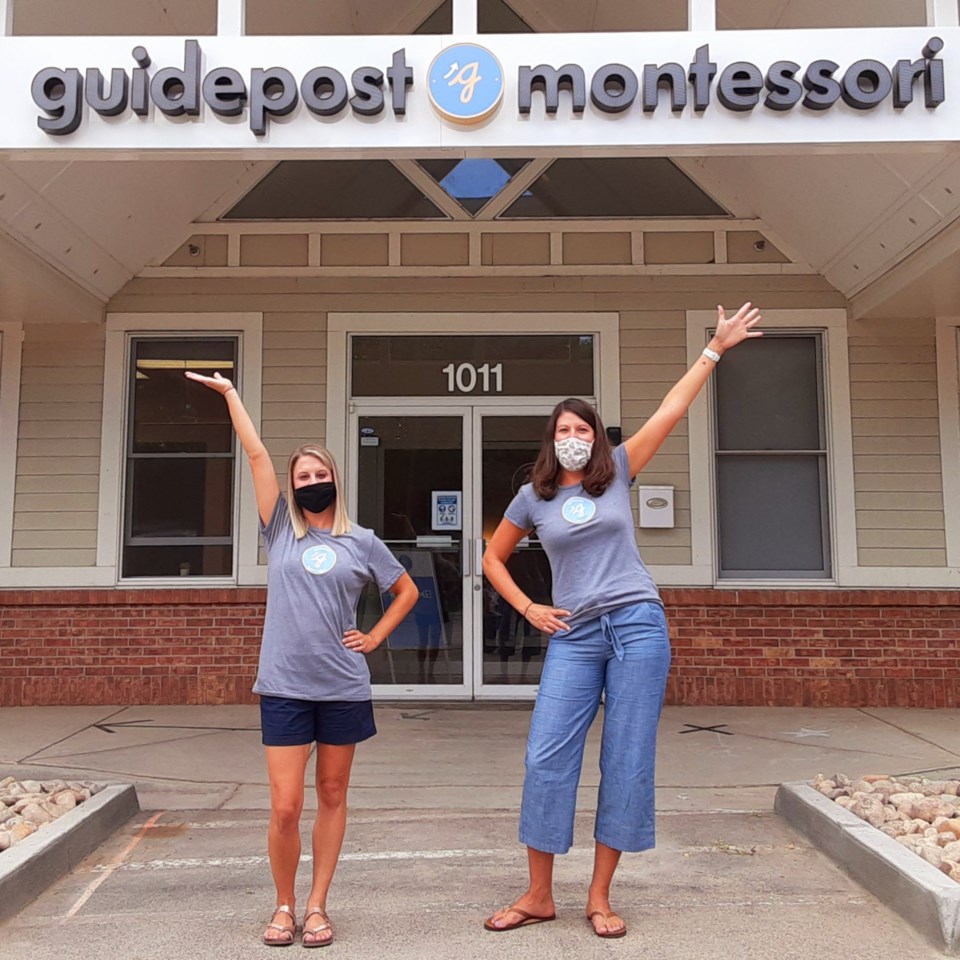 Brittney Polinchak (left), the assistant head of school, and the head of school, Shanae Huber, are welcoming new children beginning on Monday at Guidepost Montessori at Longmont. (Photo by Matt Hagerman)

As the Saint Vrain Valley School District grapples with the fate of thousands of students, a schoolhouse tucked behind shopping centers is about to have a soft opening on Monday.

The newest school and daycare in Longmont is Guidepost Montessori, located at 1011 Dry Creek Drive on the south side of town. They are currently enrolling toddlers, preschoolers and kindergarteners for the 2020-2021 school year. There is already a wait-list for infants, whom Guidepost can accept as young as six weeks.

During a virtual open house on Zoom on Saturday, an introductory video included a young girl going through all the motions of social distancing, disinfection and temperature checks. Every child and adult will have to be screened at the start of their day and facemasks will be worn by the staff at all times.

“We’re starting slow,” said Shanae Huber, head of school for Guidepost Montessori at Longmont. “We only have nine children starting next week but for fall we should have just about 50. We’re only opening one classroom in each age group. As we start filling up, we’ll reassess it.”

They are hoping to draw new parents in with inaugural tuition rates that are comparable to nearby Montessori schools. Still, each child can cost parents $1,000 per month if they attend on a full-time basis. Huber stresses that financial aid is available from Guidepost that can cut down the cost by up to 50 percent. Longmont Montessori schools have struggled to draw children from the local Latino population who, on average, come from lower income households.

“We would like to do the Child Care Assistance program,” said Huber. “I think that Guidepost’s goal is to be able to have all types of children come. Families tend to not go to schools because they think that they can’t afford it. But we do have flexibility. We’re not at a set price point where you can either afford it or not. We really want to work with families to make this a school for everyone.”

The school opened early this past April for four children of essential workers. They couldn’t take on any more until they recently became officially licensed. Other area daycares remained open as well.

“Opening our doors for emergency care was a meaningful way for us to serve families who needed childcare most during such an unchartered time with the pandemic,” said Huber “Our team has since gained concrete experience running our classrooms and programming in a way that balances the utmost priority of health and safety with the equally important developmental, social and emotional needs of our children.”

Guidepost is one of five Montessori schools in Longmont, ranging from Bloom! on Terry Street to the Saint Vrain Community Montessori School which serves children from preschool through 8th grade. None of the neighboring schools are directly affiliated with each other.

Montessori schools are not a part of a centralized institution but they each subscribe to the same philosophy, to varying degrees.

The Montessori Method was developed by Dr. Maria Montessori in the early 1900s in Rome, Italy. According to a recent Rasmussen College article, “It's a specific child-centered method of education that involves child-led activities (referred to as “work”), classrooms with children of varying ages and teachers who encourage independence among their pupils.” Teachers primarily move from group to group rather than address the entire class and students aren’t graded in the traditional public school fashion.

Just six years after their creation in Europe, over 100 Montessori schools were built in America by 1913. Yet, by the 1920’s they were viewed as outdated and seemed to vanish for decades. But, beginning in the late 1950’s it was revitalized by educators in the New York City area. Today, thousands of schools across America identify themselves as Montessori institutions.

Here’s What Doctors at Longmont United Hospital are Experiencing in the Fight Against COVID-19
Aug 10, 2020 8:00 AM

Northern Water grant program funds local sustainable landscape and water efficiency projects
Aug 9, 2020 1:00 PM
Comments
We welcome your feedback and encourage you to share your thoughts. We ask that you be respectful of others and their points of view, refrain from personal attacks and stay on topic. To learn about our commenting policies and how we moderate, please read our Community Guidelines.