Pops, Weld County's triceratops, is on the move

A triceratops skull, nicknamed Pops, is leaving its home in Greeley and heading to the Denver Museum of Nature and Science, where it will be studied by a team led by Joe Sertich, the museum’s curator of dinosaurs.
Oct 4, 2020 1:00 PM By: Deborah Cameron 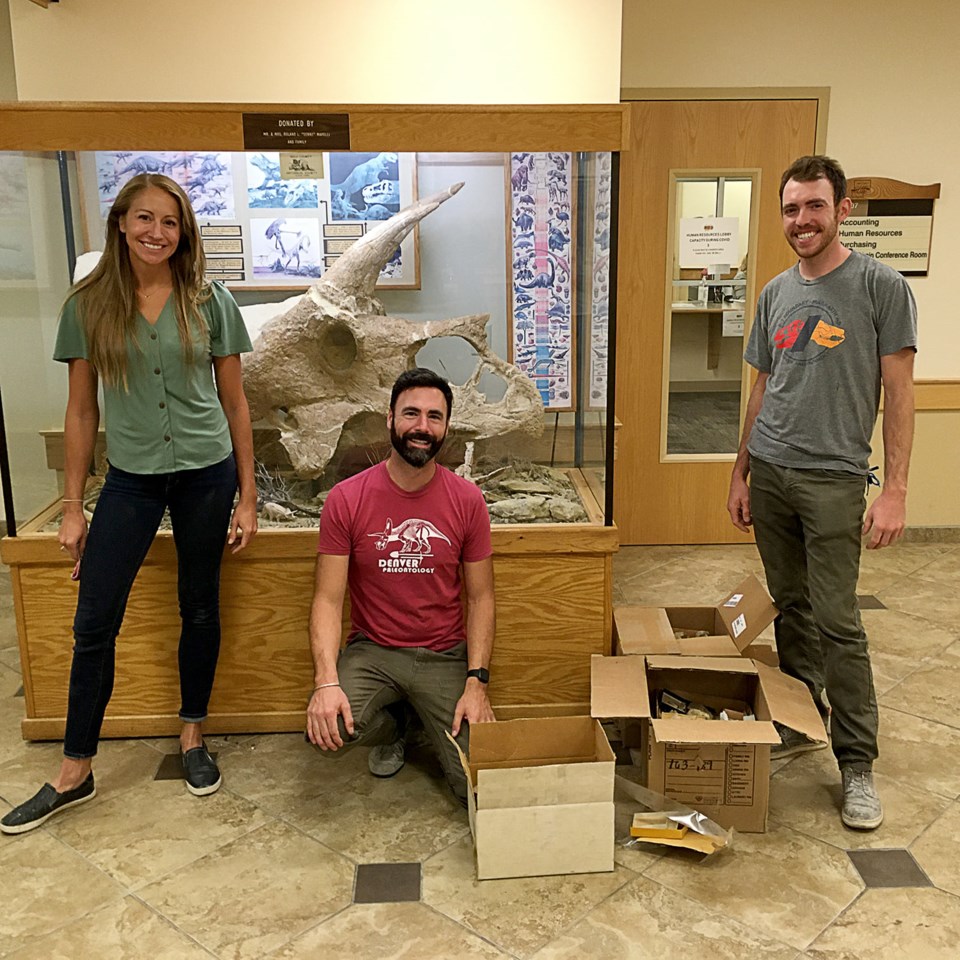 One of Weld County’s oldest residents is moving to Denver. Or at least what’s left of him.

A triceratops skull, nicknamed Pops, is leaving its home in Greeley and heading to the Denver Museum of Nature and Science, where it will be studied by a team led by Joe Sertich, the museum’s curator of dinosaurs.

Pops, believed to be at least 65 million years old, was discovered in 1982 on private property in north Weld County. It’s unearthing marked the first-ever discovery of a triceratops skull in Colorado, according to a Sept. 22 county newsletter. After its discovery, there were questions about permissions for its collection and ownership.

“Pops was ultimately determined to be owned by the Mapelli family, who donated it to Weld County government in 1986 with the provision that it be placed for public display in the county building,” said Weld County spokesperson Jennifer Finch.

The fossill was moved with the administrative building when it relocated from downtown Greeley to a new location in north Greeley. Otherwise, it has stayed put.

The skull is expected to arrive at the museum by the middle of the month, Sertich said. Once there, visitors will be able to watch the examination and cleaning process from a window in the fossil lab in the museum’s dinosaur exhibit.

Pops is expected to stay at the museum through the winter, before being moved to a renowned dinosaur fabrication specialist in Fruita for restoration, Sertich said. The skull will then be returned to display in the Weld County administrative building.

Sertich is looking forward to his task.

“Pops is probably the oldest triceratops in the fossil records. Given its age, Pops doesn’t really fit into the known species of triceratops and we’re excited about what we may learn by getting a nice, complete skull of a dinosaur from this period,” he said.

Weld County and the Denver Museum of Nature and Science want to keep the public updated as the fossil is examined and restored, and are hopeful the process will provide an exciting remote-learning opportunity. Students — young and old — can track the progress on Pops via discoverweld.com or by following Pops the Triceratops on Facebook, Twitter and Instagram.

County and museum officials say they hope watching the progress on Pops’ restoration unfold will inspire kids and adults to learn more about what’s in their backyard.

“Anyone who is interested in ancient history, fossil preservation and paleontology doesn’t have to go too far to learn more,” Finch said. “There are other spots to look for including the Dent Site in Milliken that’s about 11,000 years old and the buffalo wallow in Windsor. There’s a lot of fascinating things that are right under our feet.”

Colorado is a prolific area for fossil research because the formation of mountains caused older layers of the earth to be pushed upward. “Mountain building helps bury dinosaurs, and it helps bring them back to the surface. This is the best place to work as a paleontologist — the Rocky Mountain west,” Sertich said.

Several groundbreaking dinosaur finds have been discovered within an hour’s drive of Longmont. The world’s first known stegosaurus and apatosaurus fossils were found in Dinosaur Ridge in Golden in 1877.

Just three years ago, a fossil was discovered at a fire and police station construction site in Thornton. Upon closer examination by experts at the Denver Museum of Nature and Science, the bones, originally believed to be a triceratops, turned out to be a torosaurus, the triceratops’ smaller cousin and one of only eight ever found.

Correction: The Mapelli family's name was misspelled in the original posting of this story.

Fauci, Polis warn of coronavirus surge in Colorado, elsewhere
Dec 1, 2020 4:04 PM
Comments
We welcome your feedback and encourage you to share your thoughts. We ask that you be respectful of others and their points of view, refrain from personal attacks and stay on topic. To learn about our commenting policies and how we moderate, please read our Community Guidelines.