People can park an RV in front of their house if they are actively loading or unloading the vehicle, said Jeff Satur, deputy chief of Police Services. An RV also can be in front of a house if the RV owner has a permit. An individual can apply for up to four permits a year, at the cost of $25 per permit, to park an RV on a public street for seven days, Satur said.

Passage of Longmont’s proposed ordinance banning RVs or other so-called sleeper vehicles from parking on public streets does not mean police will begin a massive sweep in city neighborhoods, the deputy chief of Police Services said Wednesday.

For the most part, RV enforcement is complaint based, Jeff Satur said. That means — except for the most egregious cases — code enforcement and police officers are not proactively driving around the city looking to tag an RV, Satur said in an email.

“We respond when a neighbor or business complains about the issue,” he said.

People can park an RV in front of their house if they are actively loading or unloading the vehicle, Satur said.

An RV also can be in front of a house if the RV owner has a permit. An individual can apply for up to four permits a year, at the cost of $25 per permit, to park an RV on a public street for seven days, Satur said.

RV owners who frequently violate the proposed ordinance and have had their vehicle towed away also are unlikely to be jailed, Satur said.

“We don’t arrest the owners of RVs which have been towed away,”  Satur told city council members Tuesday night.

City Council on Tuesday voted 4-3 in favor of the new ordinance, which bans RVs, camper coaches, camper trailers and motorhomes from parking on city streets, in alleys, on trailheads and on other public rights of way.

The council’s vote moves the issue to a public hearing and a final, formal council vote on Nov. 10. 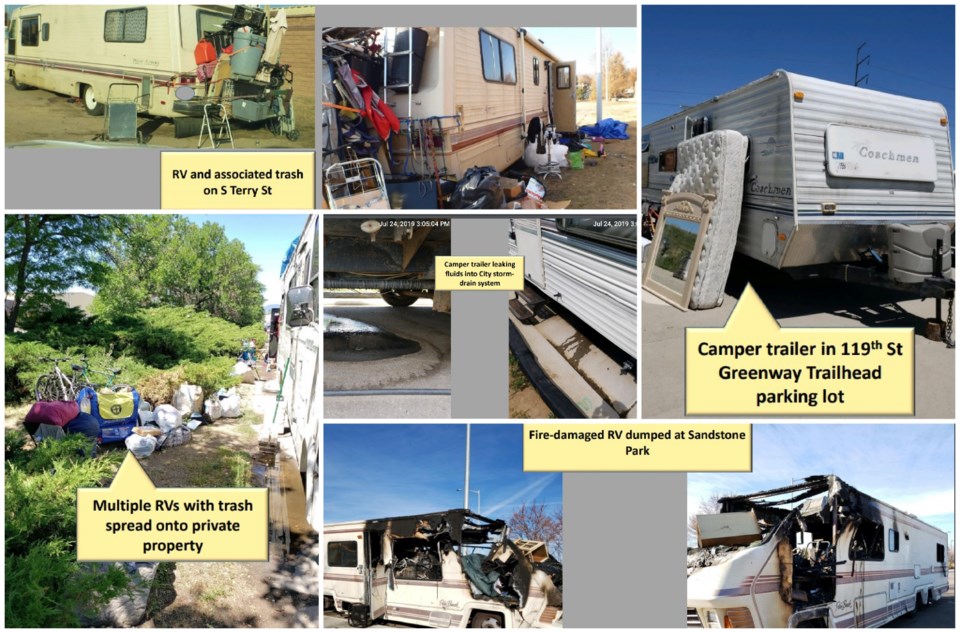 This collage depicts a number of issues tied to RVs on city streets documented by Longmont police.(Photos courtesy of Longmont Police Department)
The new ordinance would replace an existing rule that allows RVs to park on city streets up to 48 hours as long as the vehicles are moved at least 600 feet every 48 hours.

Satur backs the new law saying it would help eliminate the number of abandoned RVs on city byways and public rights of way. Some RV owners also have dumped trash and waste from their vehicles on city streets and into sewer systems, Satur said.

Some council members have said the ordinance unfairly targets those who chose to live in their RVs and/or who can’t afford permanent housing.

“I think the whole thing (the ordinance) is a mess,” Councilmember Polly Christensen said at Tuesday's meeting. “It’s not evenly enforced and against people who are poor.”

City Manager Harold Dominguez told the council Tuesday night the city is working to get funding for transitional housing for RV dwellers.

Longmont police have plenty of discretion in dealing with RV residents and will work with them to get more permanent housing, Satur said.

“Our officers are not inhumane,” he said. “If they see someone in an RV struggling with homelessness, we will get them the services they need.”

Satur said he is not aware of any RVs and other sleeper vehicles in Longmont housing quarantined first responders, including medical personnel. In those cases, a conversation with an officer or a neighbor will usually resolve the situation.

“Once people know the circumstances, I don’t think people will complain about it,” Satur said.

The same goes for evacuees from Boulder County fires. Some RV parks have made space for people who fled the fires in their sleeper vehicles, he said.

Those same people are not likely to park their RVs in any Longmont neighborhood.

“I would think they will go back to their mountain home and live in their RVs until their homes are rebuilt,” Satur said.