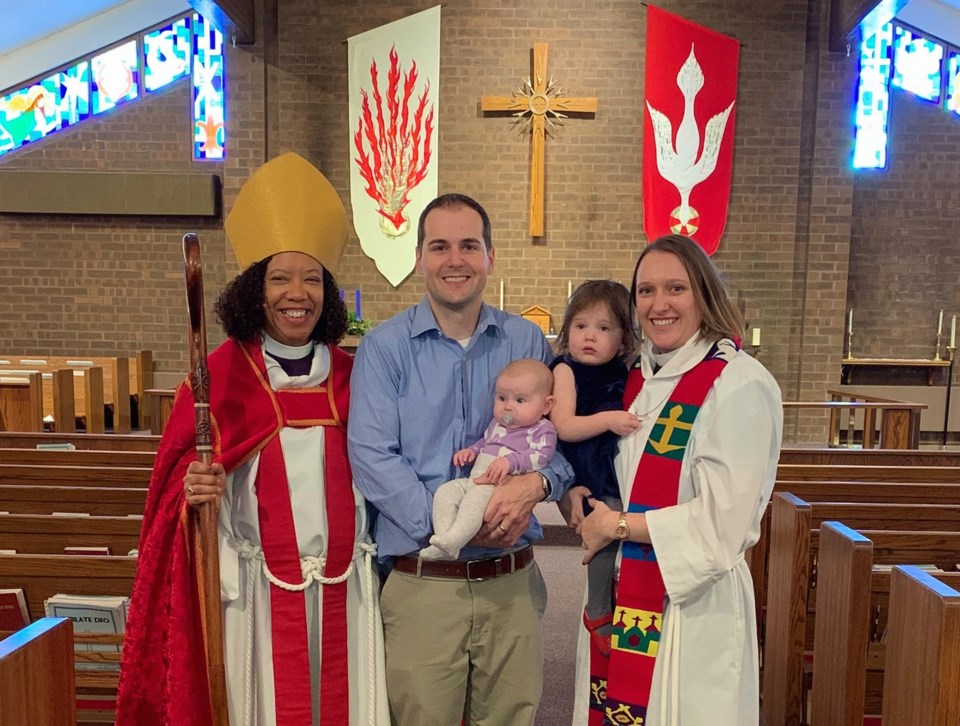 St. Stephen’s Episcopal Church in Longmont will celebrate the official installation of its new rector, The Reverend Melissa L. Adzima, at a special 7 p.m. service on Thursday, February 13. “Mother Melissa,” as she often prefers to be called, is the congregation’s first female rector. Although Rev. Adzima is St. Stephen’s first female rector, the church has had other female deacons and priests, including the current assistant priest, The Reverend Dana Solomon.

The Right Reverend Kym Lucas, bishop of the Episcopal Church in Colorado, will conduct the installation ceremony. Bishop Lucas is the first woman bishop, as well as the first African American bishop in the Colorado Episcopal diocese’s 132-year history. The service will be followed by a festive reception. Childcare will be provided, and the community is warmly invited to attend.

Growing up along the Allegheny River in the charming small town of Franklin in northwestern Pennsylvania, Rev. Adzima attended church as a child with her family at St. John’s Episcopal Church.

“I am what people call a ‘cradle Episcopalian,’ baptized as an infant and raised in the church,” she recalls. “At about age 12 or 13, I began to sense a call to the priesthood. Fortunately, the Episcopal Church had begun ordaining women as priests in 1976, thanks to the efforts of courageous women to break that barrier. My parents, who still live in Franklin and attend the same church, were very supportive of my desire to become a priest, even though it wasn’t yet a commonplace career for women. I think that’s because I had two older brothers who were always challenging me, I learned to stand up for myself and find my own voice.” That “voice” led her first to Gannon University in Erie, PA, about 67 miles from Franklin, where she earned a bachelor of arts degree in Spanish, with a minor in psychology. From there, she enrolled at the Virginia Theological Seminary in Alexandria, VA, the largest accredited seminary of the Episcopal Church. Having met her future husband, Alan, during her sophomore year in college, the couple was married in August 2010. She completed her Master in Divinity (M.Div.) degree in May 2011.

After being ordained to the priesthood in June 2011, Rev. Adzima served at St. Mark’s Episcopal Church in Erie, PA as the associate vicar for Mission Development and Administration. She also volunteered at a skilled nursing care and assisted living facility in Erie, PA, providing pastoral care and officiating at two weekly services.

“We moved to Longmont in April 2014 when my husband, who is an electrical engineer, was offered a job here,” she explains. “That September, I was called to St. Andrew’s Episcopal Church, a large urban Anglo-Catholic parish in Denver, as an associate priest in charge of Pastoral Care Ministries, along with other duties. My work at St. Andrews taught me that mission and outreach are an essential part of who we are as Christians.”

Rev. Adzima believes her views of worship, ministry and outreach match the objectives of the congregation at St. Stephen’s. “The welcoming spirit of the people here is wonderful,” she says. “They believe in the hope of Jesus’ message and want to share it with the community. For example, prior to my coming here, St. Stephen’s welcomed a new group, the Family Village, a cooperative effort to provide co-working space and other resources such as childcare for parents of young children. The values of this church also include finding God in beauty and art.”

St. Stephen’s has its own “artist in residence,” Janet Strickler, who creates original works of art both for the church building and to raise funds for various outreach projects. In the past, the church has hosted community art exhibits, and St. Stephen’s will be hosting a famous international exhibit, ‘”Icons in Transformation,” sometime in late winter or spring of 2021.

“This exhibit is one of the many reasons I was drawn to St. Stephen’s, because my previous church, St. Andrew’s, had hosted the exhibit in Denver, too,” Rev Adzima says. “It will be a natural, organic exhibit of modern interpretations of religious icons in art and sculptures around our building.”

Rev. Adzima notes that in the Episcopal Church, the congregation plays a very active role in process of hiring a new rector. One committee develops a “parish profile” of where members want the church to go in the future, as well as the qualities they seek in a rector. Another team of members serves as the “search committee” to interview prospective rector candidates and present their recommendations to the church’s governing body, the vestry. The vestry then forwards its choice to the bishop, who confirms the choice and issues the “call” to the new rector.

“This discernment process was very exciting for me,” she says. “I had been living in Longmont for five years, and I wanted to become more involved in the local community. I also was eager to work closer to home, rather than continue to commute to Denver since I now have two daughters – Rachel, who turns 3 on the day of my installation, and Elizabeth, who was born last summer. Then, when the parish profile was released, it just felt like the right fit. It’s a place where children are welcomed, and people of all ages are affirmed for who they are. Because the congregation believes that growing in faith often begins in childhood, we currently offer nursery care, and with the vestry’s strong support, we are working to rebuild our Sunday School and Youth Group programs.”

Rev. Adzima shares the St. Stephen’s congregation’s belief that church should be a place for people of all ages to grow in faith and have a support system.

“Life is too hard without the support of other people,” she emphasizes. “We want people to come ‘as they are.’ As we focus on our own inward spirituality together, we also want to continue and expand our service to the community. We hope to continue to listen deeply and respond to the needs of people in Longmont as it grows and changes.”

St. Stephen’s is located at 1303 South Bross Lane at the corner of Missouri Avenue, across the street from Kanemoto Park.