‘Still alive and thriving’: how SVVSD drama programs have endured the COVID storm

“The arts have still continued to be there for everyone during this crazy time. Creating it looks differently, but it’s definitely still alive and thriving,” said Janay Bird, St. Vrain Valley's fine arts coordinator..“For everyone, not just the students, art provides different things for everyone, may that be on the social emotional side, to help us grieve or celebrate, all of those real life emotions we feel all the time, art is what gets us through that.”
Jan 31, 2021 7:00 AM By: Silvia Romero Solís
Previous Next
1 / 1 Niwot High School drama program students. Back row: Ethan Rauschkolb, Joshua Strid, Madeline Stapp, Jazz Mueller. Front row: Audrey Asbury, Josephine Gravelle, Hosannah Adams, Ellise Stager, Jan. 29, 2021 | Photo by Matt Maenpaa
Expand
Previous Next

When COVID first hit in March, in-person instruction moved online, impacting students across the board. For those involved in the arts, hybrid and online learning has taken an added toll as they took a step back from rehearsing and performing.

However, through tapping into their creativity, high schools in SVVSD continued to muscle through the pandemic to provide and create art, according to Janay Bird, SVVSD’s fine arts coordinator.

“The arts have still continued to be there for everyone during this crazy time. Creating it looks differently, but it’s definitely still alive and thriving,” she said. “For everyone, not just the students, art provides different things for everyone, may that be on the social-emotional side, to help us grieve or celebrate, all of those real life emotions we feel all the time, art is what gets us through that.”

Jazz Mueller, a senior at the theater program at Niwot High School and president of the school’s drama club, The Dramatists, has been doing theater since he was little and participated in every production for the four years he has been in high school.

Not being able to perform in front of an audience has made Mueller’s plans for festival auditions and college applications more difficult, but not impossible, he said. Despite pandemic-related restrictions, he has been able to participate in a state-level and an international-level competition and has received two college acceptance letters so far. 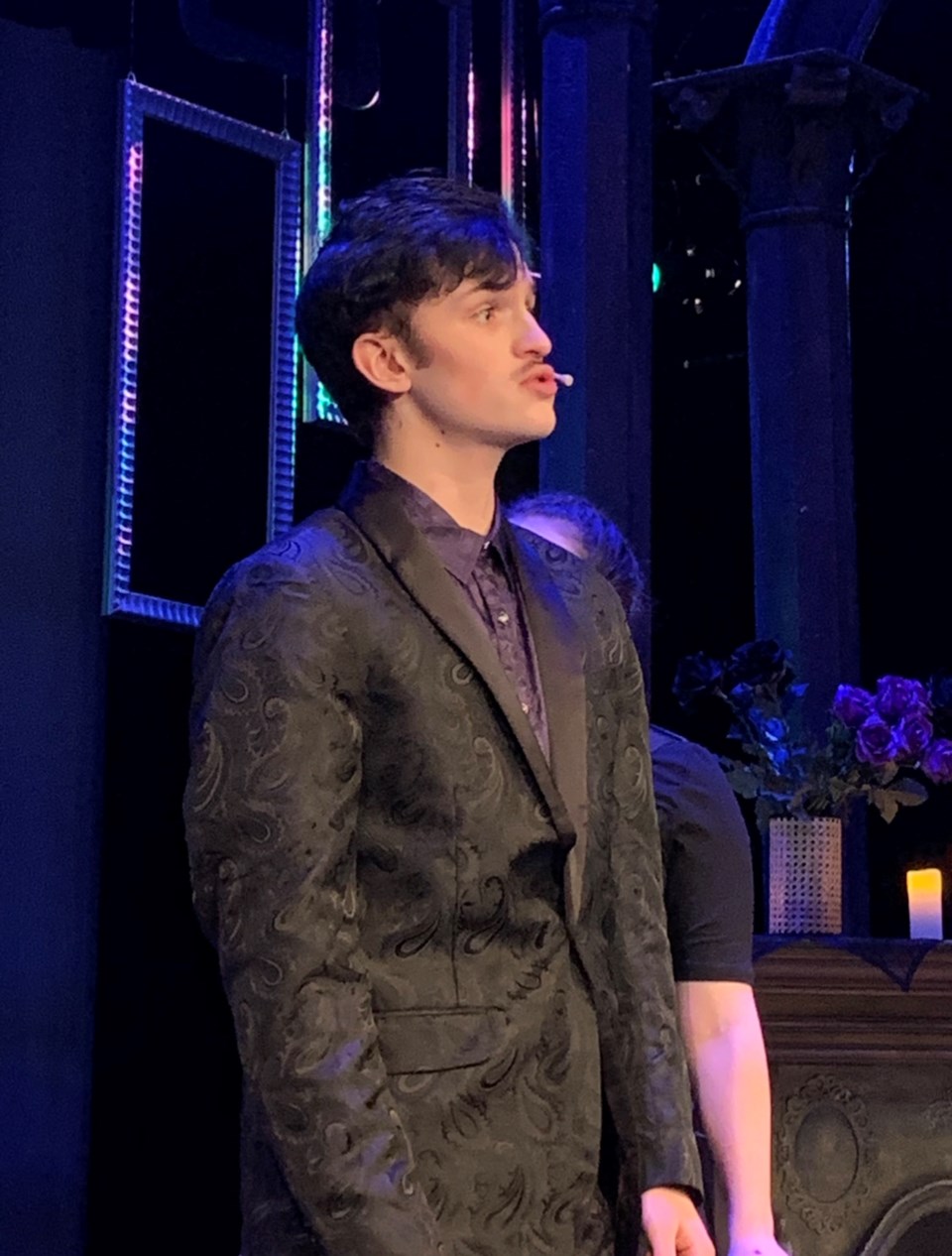 At the beginning of the school year, students and teachers in the program formed the Theater Drama Leadership Team, a group meant to continue promoting drama in times of COVID.

“Especially during these times, we are trying to give kids the opportunity to do some sort of thing with theater… the group meets every week to talk about different things but mainly we just want to figure out how to incorporate theater into our lives,” Mueller said, adding the extracurricular club has also been working on new, creative ways to keep the program alive with projects for music videos, short films, TikTok style videos, “all of it virtually.”

A key thing that has emerged from a changing landscape, according to Kathryn Colabroy-Foulke, Niwot High School’s dramatic arts teacher and artistic director of theater, is an organic kind of creativity to overcome the barrier of teachers and students not being together in person.

“Despite the challenges, I’m really proud of a lot of the things that we’ve been able to do. It’s not the same, we have to wear masks, we can’t sing on stage ... I’ve never done this before (either) so we’re all just going to have to figure it out,” she said. “We’ll come away with some new skills. Theater is super resilient and it’s goal is to mirror the human condition.”

One of the gems that has come out of the pandemic for the Niwot drama program students is an original play, “Hint,” written by one of its own, junior Ethan Rauschkolb, and workshopped by members of the advanced theater class that will be recorded and released in March, Colabroy-Foulke said.

“It’s (the student’s) original work so we didn’t have to worry about streaming rights and copyright infringement. We could just do it for fun and it wouldn’t cost us money,” she said, adding ticket sales bring in the money to fund the program and with no audiences allowed, asking the public to purchase tickets is a hard ask. “This was a great solution for us.”

Theater is not funded on a state level like other arts programs are, said Colabroy-Foulke, a lot of the funding for productions comes mostly through ticket sales, grants and community sponsors.

The pandemic has impacted the ability of these programs to raise money due to shortened seasons and an inability to perform before an audience.

On average, each high school does one big fall and one big spring production, totalling approximately 20 large scale productions across the district with any other small productions interspersed throughout the year, said Bird.

In 2019-2020, only a few productions were done in-person early in the spring and most activities were taken online or remote, she said. All schools, with the exception of two, were able to produce their big performances before the pandemic began.

March 12th, the same date for the opening night of Erie High School’s spring musical, “Fiddler on the Roof,” was the day everything shut down, said Scott Wright music and drama teacher and director of the school’s theater and the theater academy summer program 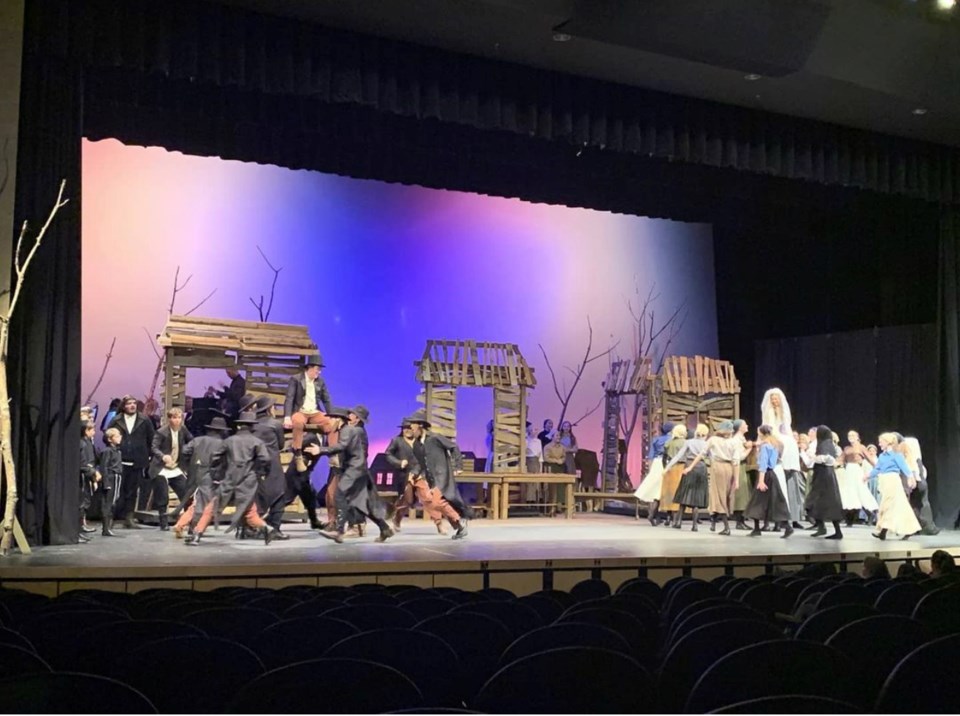 Run of "Fiddler on the Roof" for the Erie High School Musical, Spring 2020 | Courtesy photo

“It was disappointing, and almost turned into something a little poetic,” he said. “We were able to talk about the process and what we went through. Sometimes the journey is more important than the destination … It helped shape things for what this current school year is like.”

As with Niwot High, many things look differently for the Erie drama enthusiasts.

So far, they have not been able to do a formal production this year when typically, they would already have staged three or more main productions, said Wright, adding the spring musical for this year is still scheduled sometime in March or early April.

“For the musical we typically have 90 to 140 people (participating in the play), but this year we could have no more than 25,” he said, adding much has been adapted to ensure the safety of all involved, from socially distanced choreographies to doubling up on props and costumes to avoid sharing.

“It has created some more work… but a challenge is always fun.”

Mora Walker, senior at Erie High and the school’s president of the a capella choir, says it has at times been scary to balance doing what she loves with staying safe, especially now as she has been cast as Lucy for the school’s spring musical, “Charlie Brown.” 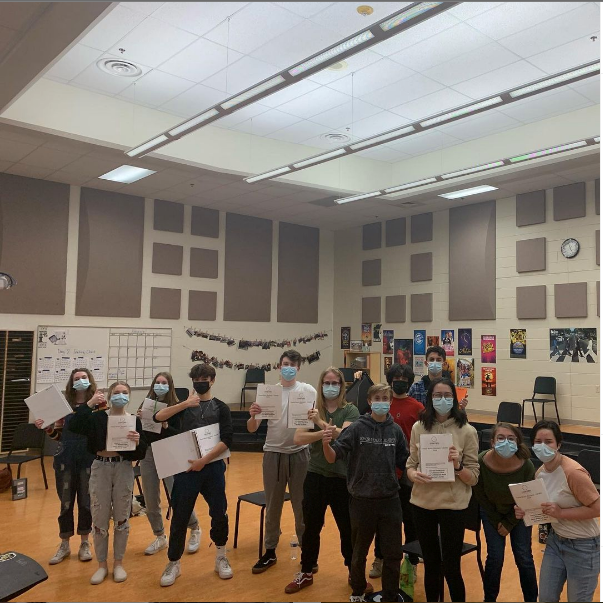 “I know that for all of my friends and (the) people I know who are involved in theater, it's just so important and impactful, and it helps us do something we are passionate about, especially for high schoolers,” she said. “It can lead us to discover things we can do with our lives.”

Bird said dates for spring productions are still up in the air as many teachers wait to see what will happen with the school and the school district after Spring Break.

For more information on upcoming performances, visit the district’s calendar.