Slower sales combined with the exhaustion of Paycheck Protection Program loan funds prompted the closure.
Jul 2, 2020 6:00 AM By: Julie Baxter 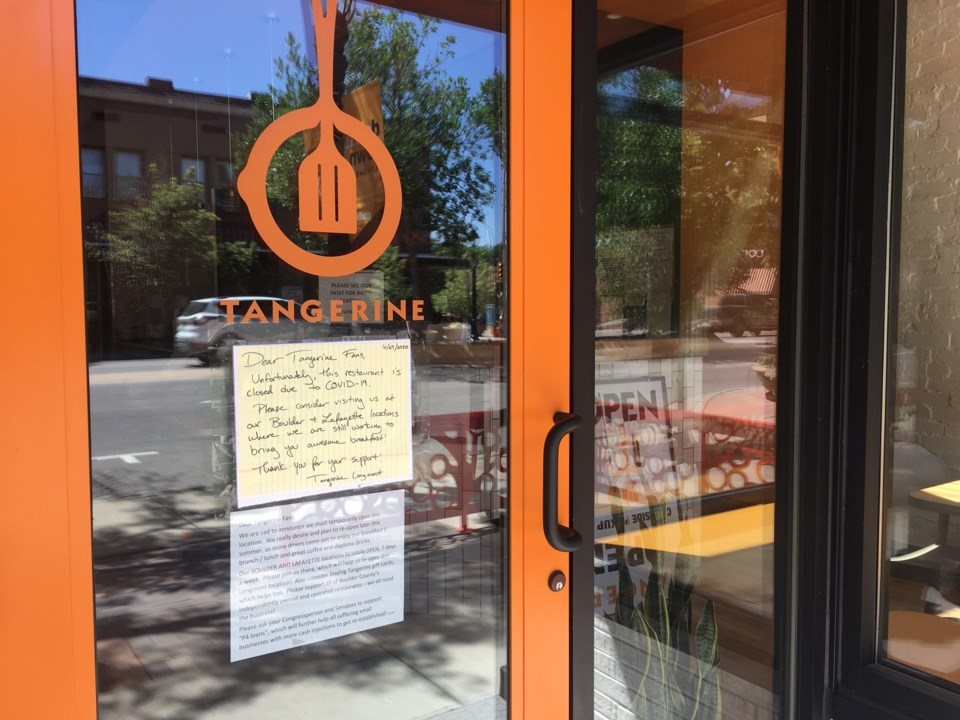 A sign on the door at Tangerine, 379 Main St., announces the restaurant's temporary closure and encourages fans to visit its other locations in Boulder and Lafayette. (Photo by Julie Baxter)

Tangerine in downtown Longmont has temporarily closed its doors.

The breakfast and lunch spot, which is one of three locations in Boulder County, celebrated its one-year anniversary just weeks prior to shuttering because of the impacts of the coronavirus pandemic and social distancing requirements.

“We lost 60% of our seats inside, outside is tiny,” owner Alec Schuler said of the restaurant at 379 Main St.

The Longmont restaurant opened in June 2019, and had gained a following but was not performing as strong as the locations in Boulder and Lafayette, Schuler said. A perennial winner on regional “best of” lists for its breakfast and lunch offerings, Tangerine wasn’t quite drawing the weekday lunch crowd in Longmont Schuler expected, but he said the location was doing fine before COVID.

“Hibernation is what I’ve been calling it,” Schuler said.

According to CNN, "More than 4.8 million small businesses tapped more than $520 billion in potentially forgivable loans through the (PPP) program — a central pillar of the $2.2 trillion emergency economic relief efforts deployed in March to try and keep the economy afloat as the pandemic led to mass shut downs of businesses around the country."

Tangerine is not alone in shutting its doors. Between June 14 and June 20, 28.7% of accommodation and food service businesses across the country reported having to close, at least temporarily, according to the U.S. Census Bureau’s Small Business Pulse Survey. In Colorado, 13.9% reported temporarily closing.

The week prior, 34.6% of U.S. accommodation and food service businesses reported having to close, while in Colorado the tally was 15.3%.

Small Business Pulse is a voluntary survey that includes employers in the United States and Puerto Rico with one to 499 employees and receipts of $1,000 or more. It aims to better understand the impact of COVID -19 on businesses and to aid “decision-makers in serving their urgent need,” according to the Census Bureau.

When reopening will come for Tangerine in Longmont is still a moving target, with Schuler saying he’s going to watch developments through July and August and reassess in early September.

“We will reopen. … Tangerine has a bright future without the virus,” Schuler said.