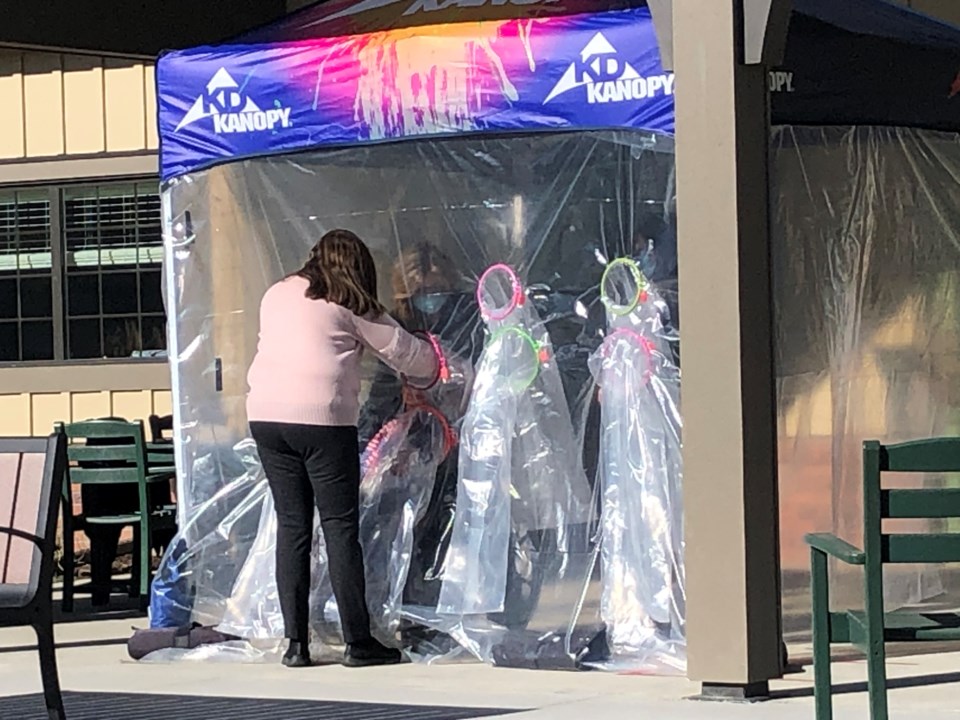 Janet Morrell hugs her mother, Elizabeth Hutchison after several months of not being able to touch. (Photo by Macie May)

Sometimes a hug is all you need and residents of the Katherine and Charles Hover Green Houses got just that on Friday.

The skilled nursing facility at 1425 Belmont Drive consists of four houses, one of which will open soon, with 12 residents living in each house.

Many of the 36 residents have not been in physical contact with family since the start of the coronavirus pandemic in March. The facility offers outdoor and window visits and a variety of virtual call options to residents and their families, but Friday was the first time many were able to touch one another in the comfort of a “hug tent

TRU Community Care, a nonprofit healthcare organization that focuses on helping families through illness and loss, invented the hug tent, which “provides a safe opportunity for residents and their loved ones to have a physical connection,” according to a flyer sent out by the organization. 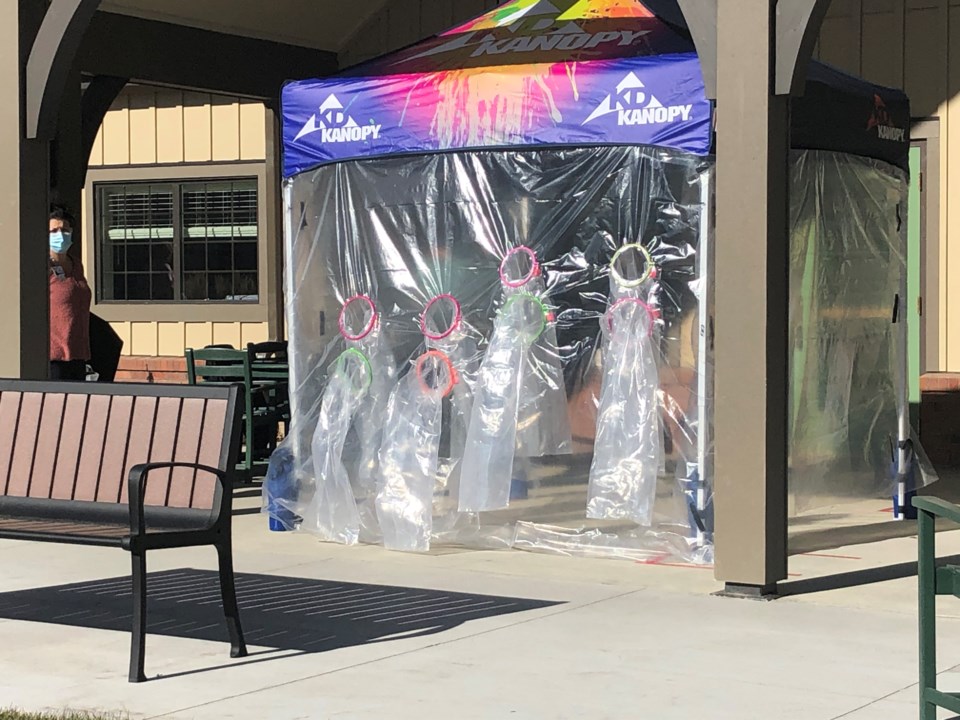 Hug Tent invented by TRU Community Care allows seniors to feel the embrace of loved ones without the threat of COVID-19. (Photo by Macie May)

Residents of Katherine and Charles Hover Green Houses were escorted into the tent, covered on three sides by plastic. Opposite the entrance was a wall with arm holes, or “hug tunnels,” which family members and residents slid their arms into and reached out for long awaited embraces.

The facility has been 100% elder COVID-free, Raymer said, so protocol was strict. Each family had to set up an appointment and go through a screening before they were allowed to hug their loved one for a total of 5 minutes before staff stepped in to sanitize the tent.

John Wargo, was visiting his mother, Sue Wargo. It had been two months since he and his mother were able to visit person-to-person, although they do window visits almost daily. Sue Wargo has been a resident at the facility for two weeks and Friday was the first day she was out of quarantine.

Before getting to see his mother, Wargo said, “It will be great. It is probably the safest way, having the barrier, but still be able to feel and have some sort of touch.I think this will be better for her than for me.”

Janet Morrell of Erie was emotional after being able to hug her mother, Elizabeth Hutchison, who is “not doing well,” according to Morrell. She said she and her mother talk by phone, but it is not the same as touch, which residents don’t get at all right now.

“The actual touch does more than you think it does,” Morell said.

Morrell was not able to see her mother well through the plastic but said she could tell Hutchinsonwas emotional during the hug.

Later Judie Rose, who lives just down the street from the facility, spoke of her experience to get to hug her husband, Bill. The couple will celebrate their 62nd wedding anniversary in December. Judie Rose said hugging her husband through the tent was “second best.”

“We’re hoping that if this works out today that there will be more of them and down the road we will actually get to tough each other,” she said.

The couple were last able to touch each other in May when Bill Rose was transferred into the facility.

Judie Rose said staff helped the couple share a kiss through the plastic and that Bill was crying and telling her he just wanted to hug her.

“Nearly one-fourth of adults 65 and older are considered to be socially isolated,” according to the Centers for Disease Control. Such isolation can bring its own health risk factors such as increasing the liklihood of premature death, dementia, heart disease, stroke, depression, anxiety and suicide, according to the CDC.

It is because of those factors and a resident-centric focus the Katherine and Charles Hover Green Houses made this event possible for their residents, said .

The facility asked both families and residents their thoughts and one woman answered, “I can’t wait to hug my sweetie,” said Lindsay Saldana, director of nursing.

“Because we are so relationship based, we want elders to know that they are the center of everything, even though COVID is dictating our lives right now. We are putting them (elders) first and doing things that might be a lot of work, but it's what's best for them and what they want and what families want, it's not what's about easy but about what's right. We put the elders first in every decision, “ Saldana said.