Like last season, the Longmont (10-3, 6-2) and Mead boys (10-3) are among the top teams hoping to capture the 4A crown. Mead advanced last year to the semifinals for a game that was never played as the remainder of the tournament was canceled in response to the coronavirus pandemic.

The Mead girls (7-3, 6-0) also will compete in the postseason tourney. Their journey begins Tuesday against No. 21 Coronado in a first round, single-elimination game. A win advances the No. 12 Mavericks to the Sweet 16 on Thursday. (See the full bracket here.)

Among the key players for Mead this year are sophomores Charlotte Brennan and Kyra Hann and juniors Edie Morrow and Jackie Stephenson, who all averaged more than 10 points a game this winter.

In their first year as a Class 5A team, the Silver Creek boys (10-3) made the postseason. Seeded No. 19 out of 32 teams, the Raptors travel to No. 14 Fountain-Fort Carson Tuesday for their opening do-or-die contest. A win advances Silver Creek to the Sweet 16 on Thursday. (See the full bracket here.)

Silver Creek won six of its final seven games including a big 64-61 victory over Class 4A No. 12 seed Holy Family on Feb. 24. The Raptors’ lone defeat down the stretch came at the hands of Windsor, who is the No. 1 seed in the Class 4A tournament.

The Longmont boys and their challenging conference were shown a lot of respect by the Colorado High School Activities Association. Despite two conference losses, the Trojans were given the No. 2 seed in the tournament behind Windsor, the Northern League regular season champion. All six 4A playoffs schools from the north were given top-15 seeds and will host their opening round games Tuesday. 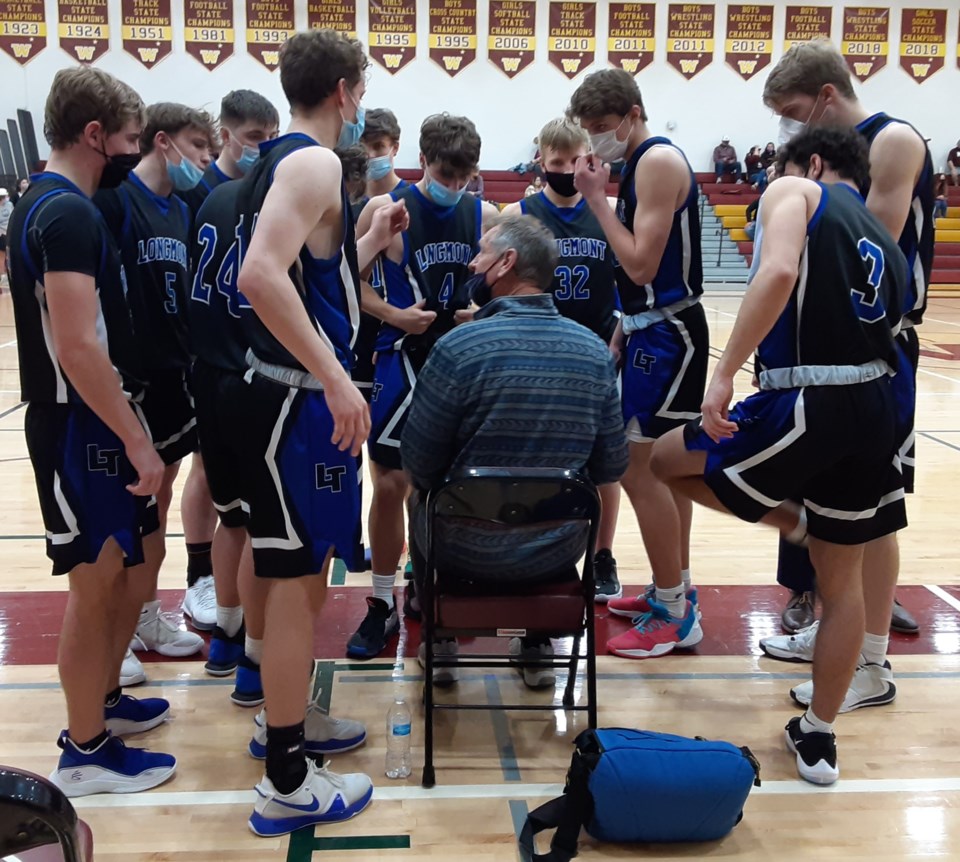 In his 28th season as head coach, Jeff Kloster hope's to lead the Longmont Trojans to their second state title in three seasons. By Matt Hagerman / For The Leader
Longmont, the 2018 4A state champion, was upended 47-38 at Windsor on March 2 in the battle between Class 4A No. 1 and No. 2. Trojans senior captain, leading scorer and big rebounder Eddie Kurjak had 24 points in the loss and averaged more than 18 a game this season. He and the rest of the Longmont squad will play No. 31 Falcon on Tuesday.

After three conference losses, the Mead boys finished strong last week with four non-conference wins in six days. They were given a No. 5 seed in the playoffs and host No. 28 Canon City Tuesday.

The only way Longmont could meet up with Mead or Windsor for a second time this season would be in the 4A championship game on March 20 in Colorado Springs.