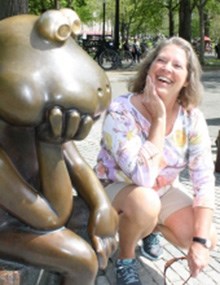 Many of you knew Ann as Ann Widener or Mrs. Widener. Some of you may have just known her as Aaron, Riley, or Darcy's mom. Her full birth name was Muriel Ann Rebecca Blanton. She was born on August 20th, 1961 in Salt Lake City, Utah. From Salt Lake, the family moved for a brief time to Provo, Utah before settling in Lamar, Colorado. Lamar was the town where her mom was born and raised and was the perfect fit for the family.

Growing up in the longtime family home on 17 Highland Street, Ann participated in many activities. They included swimming on the Lamarlins swim team, square dancing with the Dudes and Dames, gymnastics, and learning to cook and knit in 4-H. When she turned 16, she was thrilled to hold a job as a "checker" at the grocery store that was then IGA and is now Farmer's Country Market. She also became a high school pom-pon girl, but she was never a cheerleader. (Yelling did not come easy for her then or as a mom).

After high school, Ann attended Saint Mary College in Leavenworth, Kansas. How did she end up at a Catholic women's college? To make a long story short, her mom met some of the faculty at a conference. This led to her visiting the college where she felt it was the college for her. Ann spent two years at Saint Mary before returning to Lamar to get married and move to the town of Granada with her husband, Terry. The two were married in the Lamar United Methodist Church on March 13th, 1982. This was the same church Ann was baptized in as a child, joined as a young adult, and is the church the family continues to attend.

Ann and Terry lived in Granada for a few years before moving west of town to the house on county road 22.7. Yes, 22.7. Google Maps can't find it but the UPS guy can. It was important that UPS could find the house because Ann was ahead of her time in creating and ordering calendars from Kodak and books directly from publishers and authors. No Amazon or Wal-Mart needed for this mom. Ann was blessed to be a stay-at-home mom which meant that she did not stay at home because she was taking Aaron, Riley, and Darcy, to Boy Scouts, square dancing, tap dancing, gymnastics, swimming and the list goes on. In addition to the children's activities, Ann was an active member in P.E.O., Zonta Club, United Methodist Women, Circle, Prayer Chain, and became a swimming official, scout master, filled in as a cook in the school kitchen, and substitute taught. She always felt that if she had something to give and was able to, then she would.

Ann's family scattered geographically over the years while remaining close. No matter where her siblings moved or where the kids were shipped off by the military, the family celebrated Christmas together at the county road house in Granada. Without fail, she made sure to talk to her kids at least once a week, going so far as to call the Air Force Academy Command Post to make sure her kids made the drive back to school safely.

Ann's mom is a retired school teacher who lives in Lamar. Her dad was retired from the Internal Revenue Service and living in Lamar when he passed away in 2002. Ann's older brother lives in Oklahoma and works as a facility manger for a chemical industry while her younger sister lives in New York City doing public opinion research.

Ann found joy in teaching, but never pursued it as a permanent occupation. She did however teach Sunday School for over 20 years at the Methodist Church. She thought she couldn't have been as good of a mom if she had pursued a full time position. For her, it was never about telling her kids what to do. Her only hope was to show them as much of the world as possible so they could make their own decisions. This lead her to organize trips for the kids to more than 20 universities across five states over the years as each prepared to select a college. Each child had their own hopes and dreams and Ann was there to guide but never push any of them into making any particular decision.

While raising the children was a full-time job, she managed to support Terry as he continued to grow and build upon the family farm started by her father-in-law and mother-in-law, Clede and Juanita Widener. Terry worked on the farm with his brothers and sisters, but the real foundation for Terry's farm came from Ann in helping keep track of financial paperwork, accounting books, as well as creating an excellent filing system for the farm records. Dry-land farming leaves a lot in God's hands, but with Ann managing the finances, the family's affairs were never in doubt. The only doubts in the family were whether the kids wanted one swat or two or whether they wanted to run halfway down the dirt road or all the way when they were misbehaving.

Ann loved giving options. But it was never an option for her to treat others with anything but patience, kindness, and respect. She set the example on how we should treat one another and work through trials, tribulations, and conflict. We all have struggles in our lives and as Ann faced hers, she was able to light up any room with her smile. From nurses and doctors, to staff at a grocery store, hotel, or restaurant, Ann had a bright smile that would let people know how grateful she was for their help, or how joyful she was simply interacting with them. Her smile and thoughtfulness impacted so many people and will always remind us of the importance of being kind to everyone we meet.

It's that goodness of spirit that lives on in those who knew her and will remain an inspiration to us all. We should all strive for our best in everything that we do.

In lieu of flowers or memorial tree memorial contributions may be made to the United Methodist Church, the Lamar Area Hospice, and/or the Amache Preservation Society.

Services for Ann will be held at 1:00PM on Friday, August 20, 2021 at the Lamar United Methodist Church with Pastor Kristina Walker officiating.