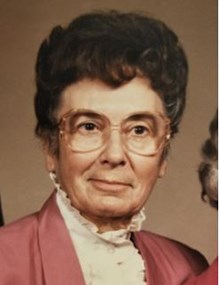 BJ was born August 6, 1920 in Fullerton, Nebraska to Lowell (Bill) and Edna (Hansen) Mason. She came to Colorado at 9 months old and spent her early years with her two sisters and parents on a farm near Genoa, Colorado during the Great Depression and Dust Bowl years.

BJ graduated from high school in Bovina, CO and took post-grade glasses at the Hugo School with the National Youth Administration, NYA, New Deal Agency. She then spent time in the Public Health Nurse Visiting School before entering nurse training at Mercy Hospital School of Nursing where she graduated in 1943.

BJ married Charles (Vern) Bostrom February 6, 1943 in Dallas, TX. Vern was in the Army and stationed in Louisiana, where she worked in a local clinic. When he was sent overseas, she returned to CO and worked in a 10-bed hospital in Flagler, CO. After he returned, the couple moved to Minot ND, where Vern could pursue his Master’s degree. BJ worked in Lutheran Hospital, where their daughter, Barbara Jo (Bostrom) Rose was born on May 10, 1949.

Vern was called back to serve during the Korean War, and the family spent time in Fort McCoy, Wisconsin. When he was discharged, the family came back to CO. He was superintendent of schools in Genoa and later went to the State Department of Education, and the family moved to Westminster where BJ worked as a school nurse until retirement.

After her daughter was grown, they spent some time living in the mountains of CO in Pinewood Springs, until they moved to Longmont, CO. BJ was a volunteer at the Longmont United Hospital for many years banking more than 3,000 hours of volunteer time. Her main hobbies were knitting, cross stich, bridge, golf (hole in one at Naval Base in Oak Harbor, WA), and watching sports.

Per BJ's wishes, no services will be held. Please visit www.ahlbergfuneralchapel.com to share a memory of BJ or leave a message for the family.