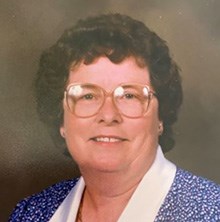 No Funeral Services will be held at her request. Inurnment will occur at a later date at Oakland Cemetery, Oakland Illinois. Arrangements are in care of Ahlberg Funeral Chapel.

Betty was born May 19, 1930 to James O. and Flossie M. (Worrell) VanBlaricum in Gifford, IL. She graduated high school at Tuscola IL. in 1948. While attending Eastern Illinois State College she met and married Jesse Howard Hallowell, her husband of 65 years, on April 30, 1949 in Henderson, KY. Jesse proceeded her in death on July 4, 2014. They are the parents of three children; Jesse Van (Cheryle) Hallowell, Patricia Sue (James) Dean who proceeded her in death on March 22, 2014, and Paul Howard Hallowell.

Betty started her career teaching elementary school in upstate Illinois and stayed involved in education her entire life. She was a tireless volunteer for many charitable organizations and was active in every community she resided.

Betty was preceded in death by her parents, her brother Dennis, her husband Jesse and her daughter Sue. Surviving are her two sons, Van and Paul, four grandchildren, and five great-grandchildren.

In lieu of flowers, memorial contributions can be made to the Salvation Army.