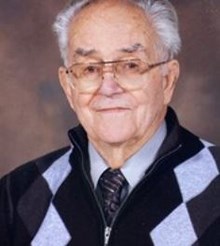 Dallas LeRoy Godsey was born as the only child February 20, 1922, to Donald Dee and Lily Ann (Bowen) Godsey. He was born in the farmhouse on the Godsey homestead southwest of Wray, Colorado. Dallas passed away Nov. 17, 2020 at his home in Wray, Colorado.

Being an only child, Dallas had many responsibilities on the farm. At an early age, he worked alongside his dad and Uncle Beryl Godsey hitching the horses for the day’s work in the field. There were cows to milk, cattle to check, and pigs and chickens to feed. When in the fourth grade Dallas’s father became ill with dust pneumonia so the young boy had to drive one of the teams to plant the spring crops. Life on the farm was made a little easier with the purchase of a John Deere GP tractor in 1935.

Dallas attended Sunnyside country school near the Godsey farm. To attend high school, he stayed in Eckley during the week returning home on weekends to help with farm work. He graduated from Eckley High School in 1940. Following graduation, he enlisted in the US Army and later volunteered for the Air Corps. He served from 1942 to 1945 in England, France, and central Europe. When he returned home, Dallas married his high school sweetheart, Annette Maxine Bagley. They began their married life near the Godsey homestead where he farmed and ranched with his parents. They were blessed with three children, Cheryl, Donald, and Berna. Cheryl died from leukemia at the age of five. Dallas and Maxine were both baptized into the RLDS Church in 1951 and continued as active members of the church all of their lives. They were married 70 years before Maxine passed away in 2016.

In addition to dryland farming and ranching, Dallas continued with the Grade A dairy started by his father. In 1974 Dallas suffered a serious heart attack and was forced to quit the dairy. After that, he assisted his son with the farm and ranch operation. In 1998 Dallas retired and the couple moved into Wray. He was a member of the Yuma County Sheriff’s Posse for several years. He and Maxine enjoyed camping with the family and traveled to Hawaii, Canada, Mexico, and Europe. One of his favorite hobbies was collecting antique stationary engines which he would start and run for the grandkids. In 1987 the Godsey family was designated a Colorado Centennial Farm. He also was especially proud that the family was chosen as the State Conservationists in Farming for the year of 2001.

He was preceded in death by his wife Maxine, his parents, and his daughter Cheryl, and his father-in-law and mother-in-law Arthur and Alice (Beach) Bagley.

Surviving Dallas are his children Donald and Deborah (Baucke) Godsey of Wray, and Berna Godsey of Cheyenne, Wyoming. Dallas has five grandchildren: Ryan (Susan) Godsey, Chad (Melanie) Godsey of Wray, Derek (Susanne) Godsey of Rapid City, South Dakota, Sara Weston of Laramie, WY, and Michael Weston of Cheyenne, WY. Great grandchildren include Taylor, Megan, Karly, and Drew Godsey, Madison and Grady Godsey, and Joseph, Grace, Allison, Andrew, and Thomas Godsey along with many nieces and nephews. Dallas was proud to see the sixth generation of his family live and work on the family farm homesteaded by his grandparents in 1887. He has been an inspiration to his children, grandchildren and great-grandchildren. He will truly be missed.

Dallas never knew a stranger. To carry on a conversation with Dallas one need not say much; just be a good listener, because before he would finish, he usually had a story to tell you. He delighted in making a person laugh.

A private graveside service was provided by Schmidt-Jones Funeral Home on Monday, November 23, 2020, at Grandview Cemetery in Wray, Colorado, which was officiated by Mitch Korf and Sue Mueller of the Community of Christ Church in Yuma, Colorado. Memorial donations can be made to the East Yuma County Historical Society Veterans’ Memorial Fund.