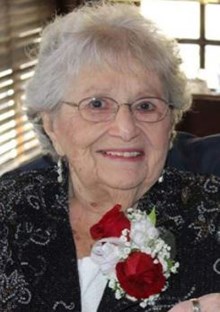 Dorothy Elizabeth Startzell Grafinger passed away peacefully in her home surrounded by her three daughters on April 4, 2021. She was 93 years young.

Dot’s father was in the Navy, so the family moved frequently but Dorothy loved Pennsylvania the most. After high school Dorothy attended Katharine Gibbs Business School in Rhode Island after which she and her sister Emily were recruited by the National Security Agency (NSA). The girls moved to Washington DC where they got to experience an exciting new life full of fun. They got involved in a Catholic singles group where Dot met and fell in love with a handsome Navy man, Gene Grafinger. Dot and Gene were married August 21, 1954 in Washington, DC. Shortly after the wedding they moved to Cleveland Ohio where they lived for 2 years and in June 1956 had their first daughter Debbie. In December 1956 Dot and Gene packed up and headed across the country to Phoenix, Arizona where they purchased a Dairy Queen. In May 1957 they had their second daughter Kathryn Louise. In 1959 Gene was hired as a City of Phoenix fire fighter and in 1961 they purchased their first home where they had their third daughter Amy. They lived in Phoenix for 37 years until 1993 when they moved to Longmont Colorado.

Dot was very involved in New Song Four Square church. She enjoyed helping serve meals in the fellowship hall and loved being involved in the “Over 50’s” group. She also loved being part of the women’s bible study who went on to become the “Church Ladies” that met for lunch once a month. Dot was a strong Christian who was a loving wife and mother. She took pride in her home, taking care of her family and always making holidays very special. She was known for her yummy pot roast which the family affectionately called "DOT" roast. Dot also adored her grandchildren and looked forward to summers when they would come spend a month. She often talked about how she loved having them all to herself! Dot also loved dogs and usually had at least 2. She enjoyed doing ceramics, loved to read, especially Amish related stories, she enjoyed playing her electronic Solitaire game, doing word search puzzles and although, not her favorite thing to do she was an excellent seamstress. Dot had a passion for purses and was always looking for a new one, she loved pretty clothes and all kinds of jewelry.

Dot is survived by her daughters Debbie A. McBride, Kathy L. DeGesualdo (Joseph) and Amy E. Grafinger. Her Grandchildren Ashlee Joy (Van) and Morgen Joseph, 10 and soon to be 11 Great Grandchildren, Adrianna, Tobias, Augustine, Sebastien, Emmeric, Magnus, Athanasius, Eirena, Estelle, Eulalia and due in May Hadassah, her sister Emily Meier five nieces and two nephews. She was preceded in death by husband Eugene P. Grafinger, Jr. her parents Frank and Helen Startzell and her brother Frank R. Startzell, Jr.

Special thanks the Compassus Hospice team for their special care of our mom.

One of mom’s favorite scriptures is Numbers 6:24-26, May the Lord bless you and keep you; may He make His face shine upon you and be gracious to you; may the Lord lift up His countenance upon you, and give you peace.

We love and miss you mom!!