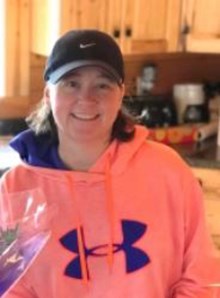 Emily Josphine (Egr) Clark went to be with God on February 20, 2021 after a strong battle with cancer.

Emy was born in David City, Nebraska on March 30, 1975 to James and Bernadette (Lankas)
Egr.

She graduated from Aquinas Catholic High School in David City in 1993 and received her Bachelors of Arts in Accounting from Nebraska Wesleyan University in 1997.

Emy spent her 24-year career as a CPA for K-Coe Isom in Lamar, Colorado.

Emy married Bo Clark on June 25, 1999. They have two children, Cassandra Cay and James Bo. Emy loved her family, watching her children's sporting and fine arts events, hunting, boating on the lake, movies with her husband, and spending time with her family in Nebraska.

Emy was strong in her faith and set an example for others.

In addition, a visitation will be held on February 28, 2021 from 12 p.m. to 1 p.m. at St. Mary’s Catholic Church in David City, Nebraska, followed by a memorial mass at 1 p.m.
Memorial Contributions may be made to Lamar Area Hospice either direct or through the funeral home office.