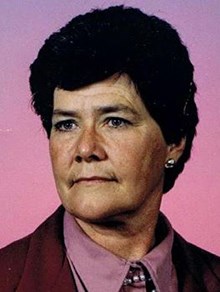 Ethel Arlene Taylor (Goin) Brewer 86, peacefully danced from our arms to the Lord’s arms at her home in Cedaredge, CO, on February 17, 2021.

Ethel was born August 20, 1934, at the family farm in Seibert, CO to Charles Henry Taylor and Bertha Elizabeth (Beckner) Taylor. Ethel was 6th of 13 children born to Charlie and Bertha. Ethel graduated from Siebert High School in 1954. She married Donald Goin in June of 1954. Four children were born to this union. Ethel and Don lived in Colorado Springs, CO, until the family moved to the Ellicott, CO, area in 1966. This marriage ended in divorce in 1979. Ethel worked as a dairy farmer and DHIA dairy herd tester for 16 years, and then as a dental assistant for 16 years. In 1998 Ethel married long-time family friend Charles Brewer, gaining 2 sons and a daughter.

Services will be held 2:00 p.m. Friday, February 26, 2021 at Hanover Community Church with burial to follow at Chico Basin Cemetery. Donations may be made in Ethel’s name to Grand Valley Oncology, 2596 Patterson Road, Grand Junction, CO 81505.