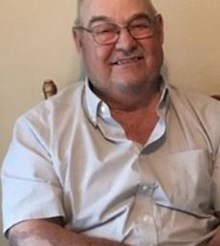 Gary Lee Adler was born on July 5, 1947 to Floyd and Marian Adler. He was born the third of seven children in Longmont, CO. Gary passed away on February 9, 2021 at his home in Wray, CO after a long struggle with cancer.

He was baptized and confirmed at Peace Lutheran Church in Longmont. He began school in Mead, CO and loved sports- especially basketball and football. Gary worked all of his school years on the family dairy and farm. He graduated in 1965 as the first graduating class of the new Longmont High School. Shortly after graduation, Gary joined the Army and served for 3 years. He was stationed in Germany.

After being discharged from the Army, Gary found the first love of his life- his 1968 Z28, red with white stripes Camaro and bought it from the dealership showroom. While cruising Main in the Camaro, he found the real love of his life, Nanette Clark. Two years later, Gary and Nanette were married in 1970 and started farming west of Mead. They grew sugar beets, corn, pinto beans, alfalfa, and Coors brewing barley. Gary and Nanette welcomed their first child, Brent Adler, a year later. They then moved south of Johnstown, CO, where they continued to farm and feed cattle. Their second son, Lyle Adler, was born in 1976.

Gary loved farming and his cattle. He especially enjoyed working with his brothers and father during harvest for many years. Together the family enjoyed their own competitive softball team. One year, their team won “The Pennant” in Longmont. Gary also enjoyed working on muscle cars with his brothers and going to and participating in drag races. He loved the Three C’s- Camaro’s, Cattle, and Couch. Gary was hardworking, honest, and faithful.

In 2001, Gary and his family moved to Wray, CO, where he continued farming and ranching. He felt that it was the best move that his family had ever made. Gary loved the Sandhill area, the people, and the community.

Nothing compared to the joy that he experienced from becoming a grandfather to his two adorable granddaughters, Jaelyn and Makia Adler. He shared his passion for farming and ranching by working alongside his granddaughters.

Gary and Nanette were reunited with his original 1968 Z28 Camaro in 2017. He enjoyed going to car shows and parades as well as visiting with other car enthusiasts. In celebration of their 50th anniversary, they cruised Wray in the 2020 Mask Parade just like the good old days, enjoying their car once again.