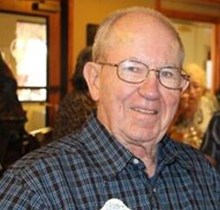 John Baker completed this final chapter of his earthly life early Monday morning (3-22-21) of complications of Parkinson’s Disease at Aspyre Rock Creek in Fort Collins where he had been a resident since mid-November.  It is a blessing that he no longer is suffering from the symptoms of Parkinsons.  We believe he is at peace and has transitioned to a room in God’s heavenly mansion.

The family would like to take this opportunity to thank all the staff at Aspyre for their kind, compassionate care during John’s stay with them.  It was not an easy transition, but they gave their all to him and his comfort.  For this we are so appreciative.  We also sincerely thank them for the compassion they showed to our family during this time.

John was born to Kenneth and Doris Baker in November 1941 in Del Norte, Colorado.   He was welcomed at home by an older brother KC.  He grew up in Center, Colorado, and completed his elementary and high school years there.  He attended college for 2 years at Pueblo Junior College, then transferred to the University of Colorado Boulder to complete his bachelor’s degree in Civil Engineering.

John and Marilyn McGee were married in Monte Vista, Colorado, in 1963 and completed their college education the following spring.  They moved to Denver, Colorado, where they resided until 2013.  Their children, Mark and Vicki, were born in Denver during that time.

John worked for the Colorado Highway Department for 5 years.  Was then with a small energy consulting company, Cameron Engineers, for 12 more.  He worked on projects concerning oil shale development on Colorado's Western Slope. He was editor of their quarterly Synthetic Fuels reports.  Then, before takeovers were fashionable, the consulting firm was acquired by a large engineering company, Pace Engineers, and things changed.  He went with Amoco and its Rio Blanco Oil Shale Project, which almost immediately started losing momentum.  A little more than 2 years later, he got restless and resigned so he could start what he called “his mid-life crisis” on schedule!

John spent a year and a half at home, doing some consulting, golfing, getting familiar with computers, ..oh.. and finishing the basement.  He returned to work in October 1984 as a tariff analyst with Texaco Trading & Transportation in Denver.  He spent 14 years with Texaco.  It was the most satisfying and rewarding part of his career.  During this time, he spent his weekends and short vacations driving his daughter all over the US to compete on her horses.  He helped his son get started at Texaco and was so proud of Mark’s successful career with Texaco/Shell.  When Texaco and Shell merged their downstream operations, including pipelines, and began moving everything to Houston in 1998, John decided on early retirement effective October 1, 1998.

In 2013 John and Marilyn moved to a twin home at Good Samaritan Loveland Village in Loveland to be closer to their daughter and granddaughter.  John is survived by wife Marilyn, son Mark and daughter-in-law Maria, daughter Vicki and granddaughter Kate, two grandsons John and wife Alyssa, and Chris and girlfriend Laura.  He was also proud to be a great grandfather to Kacie and Micah Baker (children of John and Alyssa).

John enlisted in the Colorado Army National Guard in January 1966 and served in Golden and Aurora for 6 years, being honorably discharged in January 1972.  He began his service as Company Clerk and ended his service in the Military Police Division.  He was proud to be considered a veteran.

In lieu of flowers, the family suggests contributions to:

Parkinson’s Association of the Rockies, www.ParkinsonRockies.org