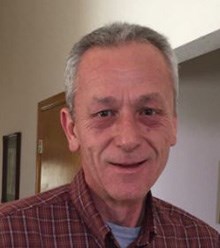 John Joseph Gratkins passed away unexpectedly on Monday, March 8, 2021 at the age of 61.  He was born in Decatur, Georgia on August 29, 1959, the son of John H. and Rosemary Gratkins.  John is preceded in death by his parents and is survived by his sister Eileen.

After the family relocated to Arvada in 1970, John attended East Arvada Junior High and then Pomona High School, graduating in 1977. After high school, he attended Front Range Community College and Metro State University, graduating with a Business degree in 1982.

John began playing hockey in high school and a love of the game was born.  He played on various hockey teams for years, continuing well into adulthood.  Fueling his love of the game, he was able to work for more than a decade at the Hyland Hills Ice Arena, eventually becoming the rink manager.

In March of 1997, John accepted a position as Facilities Manager at the Arvada Center for the Arts and Humanities, a position he held until his death.  In an email sent out by the Arvada Center acknowledging John’s untimely passing, the Chief Operating Officer (John’s supervisor) wrote “As our Facilities Manager, John took extraordinary pride in making the building work for everyone that came through our doors – the doors that he quite literally helped keep open. He was fiercely protective and passionate about this place. He didn’t necessarily “make art” but he absolutely made art happen.”

John was an intensely loyal and devoted co-worker, friend, and family member.  He will be greatly missed. A Celebration of Life reception will be held sometime at the beginning of June at the Arvada Center for the Arts and Humanities. Details can be obtained at https://bit.ly/johngratkins.