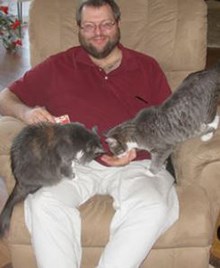 Jonathan was born November 14, 1974 in Wiesbaden, West Germany at a military hospital because his father was serving in the U.S Air Force at the time. As he grew and went to school, his residences stretched from California, to Colorado, to Nebraska, to Arizona, and finally back to Colorado for the last twenty years or so. He was presently living on the south side of Denver and was employed at Mersive Technologies in downtown Denver.

Jon was almost always smiling. He loved life. His forty-six years were somewhat shorter than anticipated but he found joy in every one of the days he had. He died at his home July 16, 2021.

His special passions were cats, cars, and computers—and books! His book collection was nearing the “storage shed” status.

Jon also liked to travel, to see people, which was rather restricted until quite recently. He did manage to spend a wonderful week with his brother, Scott, last Thanksgiving in
Waverly, Nebraska. Then around Memorial Day this year he resumed his annual trek to Phoenix, Arizona to spend time with his best friends, Keith and Peter.

He is survived by his parents Elroy and Delilah Briggs of Boulder, CO; his brother Scott Briggs of Waverly, NE; his two precious cats Georgi and Miss Kitty; and many other loved ones spread throughout the country.

There will be no in-person services and interment is still pending. So we would appreciate any thoughts, memories, or pictures that you would like to share with us here.


Earth has no sorrow that Heaven can’t heal…
We are all in God’s hands,
Trust Him to know what’s best.