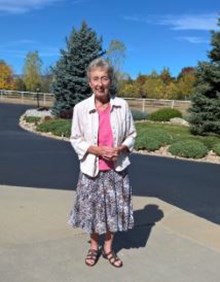 Joyce Karen Plowman was born on June 2, 1938 in St. Cloud, MN to LaVerne C. Hackett and Inez Foss, she was preceded in birth by three older brothers.  Much of her early years were spent in and around Wilmar, MN. She had many fond memories of those years spent with aunts, uncles, and cousins.  Most of her family were farmers and she enjoyed time spent on their farms.  In about 1948 her father contracted tuberculous which required hospitalization in Minnesota.  Around 1950 the family moved to Englewood, CO where he received treatment at Swedish Hospital.

Joyce attended and graduated from Englewood High School in 1956.  Shortly after graduation she met her eternal companion Ross T. Plowman, who was visiting Colorado while on leave from the Navy.  They were introduced by his navy buddy and her best friend.  Three months later on August 23, 1956 they were married in Seekonk, MA and they enjoyed almost 64 years of marriage.

The next 11 years were spent in Rhode Island, Idaho, and mostly Utah.  During those years they had three children Laurie, Babette, and Ross (Rusty).  In 1967 they moved to Colorado where they found their true home.

Joyce enjoyed making a comfortable home for her family and supporting Ross in his business.  She was a wonderful wife, mother, and grandmother.  All of her family knew she loved them and that they were important to her.

After raising her children she started working for a flower shop in Arvada delivering flowers.  She found she liked the floral business and decided to pursue a career in floral design.  She worked in four different shops in the Denver area.

She was a dedicated servant of the Lord and served in many positions within her church, The Church of Jesus Christ of Latter day Saints.  She loved working with children, youth, and adults.  Other things she enjoyed were traveling, playing golf, raising dogs, decorating her home, and spending time with family and friends.  Wherever she went she made friends and she will be missed by all who loved her.

Joyce will be well remembered by all who knew her well as someone who loved life, had a positive outlook, a good sense of humor, enjoyed simple pleasures, had a strong faith, and a genuine love for most everyone she met. She enjoyed great health thru out most of her life until the last couple of years when she was diagnosed with Parkinson’s disease.

She is preceded in death by her parents, brothers, Lyle, Ken, and Don, and her daughter, Babette, and two great-grandsons.  She is survived by her husband, Ross, daughter, Laurie Kershaw (Gary), son Ross T. Plowman II (Cindy) and Son in Law Scott Harman, 10 grandchildren and 19 great-grandchildren.

Wendy Henderson
Jul 14, 2020 5:54 PM
Comments
We welcome your feedback and encourage you to share your thoughts. We ask that you be respectful of others and their points of view, refrain from personal attacks and stay on topic. To learn about our commenting policies and how we moderate, please read our Community Guidelines.