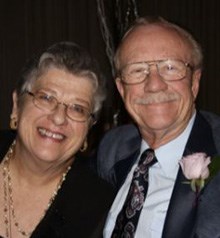 With great sadness, we announce the death of Judith Ann Fisk. She passed peacefully the evening of June 1, 2021, succumbing from acute heart disease at 82 years of age.

Judy was born in Des Moines Iowa on May 6, 1939, to Theodore (“Ted”) Schamp and Mildred (“Milly”) Smith Schamp. She was blessed to grow up very near both sets of her grandparents. The family moved to Colorado when Judy was ten. As the oldest, Judy was most often the ring leader when mischief was afoot. She treasured her close relationships with her siblings throughout her life.

Judy briefly attended the University of Colorado at Boulder and went on to hold several career positions. The position she was most proud of and held for 25 years—and where she developed many life-long friendships—was being the Facilities and Services Director at Holme, Roberts & Owen, which grew to be one of Colorado’s most prestigious law firms. Judy also worked for Level 3 during the heyday of the .com boom. She had a flair for logistics, and late in her career she went on to share that talent with Kahuna Ventures. She was employee #2 and supported the growth of the business until her retirement, after which she proudly volunteered at the Longmont Police Department.

Judy loved life and had many interests—including cooking, golf, and music. She learned to play the piano and violin as a child, was self-taught in guitar, and was even learning to play
the banjo in her 80s.

Judy was also the consummate cook. She was a foodie even before that was a thing. She loved food and loved to love with food—including giving special treats to all of her furry friends. Judy turned her culinary arts hobby into a business, first by writing a food column for her local weekly paper, The Broomfield Enterprise, and then taking that column to The Daily Camera, which remains the daily newspaper for the whole of Boulder County.

Before the internet became the source for almost any recipe, the newspaper was the primary source for new ideas. As such, Judy’s column, “On The Savory Side”, was widely read. As a feature of her column, Judy went on to host an annual cooking contest inviting several area chefs and restauranteurs to join her in judging the cook-off finale amongst the top contestants preparing their original recipes, which were then published in a special pull-out section of the paper. This was a big deal—and eagerly anticipated, with over 10,000 entries.

Judy was also an avid reader and enjoyed traveling up to Blackhawk and her weekly scratchers. While she never won big, she paid for her hobby with her winnings. Judy also enjoyed traveling whenever she could, and fondly remembered visiting the north woods of Wisconsin, several cruises, her trip to England, and several golf vacations.

Judy had the most beautiful, piercing blue eyes, and her daughters thought she looked a lot like Elizabeth Taylor, and called her the “Galloping Gor-mommy” after British Chef, Graham Kerr’s “Galloping Gourmet” cooking show that was popular at the time. As a parent, she always said her job was to create memories—and did she! Judy and Vince raised their young family in Broomfield, Colorado where Judy was a resident for 50 years. She was exuberantly patriotic, and like their mother, each of her daughters still tear up when the American flag is carried by in the Broomfield Days Parade.

Judy will be remembered for her generous spirit—if Judy “adopted” you as a friend, she never let go. She also had a keen sense of humor. Even in the hospital when asked how she was feeling, she answered, “With my fingers!”

Based on her love of golf, her family is hosting a celebration of her life at Saddleback Golf Club Pavilion, located at 8631 Frontier Street, Firestone, Colorado 80504 on Wednesday, June 16, 2021, at 2:00 p.m. (comfortable attire). In lieu of flowers, the family appreciates donations in her name to Shriners Children Hospital (shrinershospitalsforchildren.org) or the ASPCA (aspca.org).