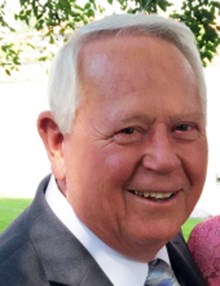 Kenneth Leroy Ullom was born in Lamar, Colorado, on Sept. 11, 1942, to Victor Leroy Ullom and (Lillian) Rosalie Ullom and grew up in Wiley. Family, church, school, and boy scouts kept him busy. Despite losing his dad to ALS when he was 15, he had a zest for life - proven by his childhood nickname “Spunky.” In high school, sports and FFA filled his free time. Combining his love for God’s creation and God’s people, Camp Colorado, a Church of the Brethren camp in the mountains west of Castle Rock, became a special place to him. Next, he took a “gap year” in Germany to attend another year of high school as a way to learn the language and culture. Before flying back to the States, Ken took a 3-month bike trip around Europe with Lane Yoder, Wayland Beeghly, and Tom Brubaker. Then he attended McPherson College in McPherson, Kansas, gaining not only an education but also lifelong friends. He graduated in 1965 with a degree in economics and business administration.

After college, Ken served in Laos as a part of International Volunteer Service (IVS) from 1965 – 1969. Ken was stationed in Vang Vieng, where he implemented a boar program and helped with the local rice program, emphasizing double-cropping to expand production. He also worked to distribute an improved variety of ducks and vegetable seeds.

Back in the states again, he headed to the University of Boulder. He graduated with a Masters in Business Administration and returned to the plains of southeastern Colorado to run Ark Valley Alfalfa, and a variety of other family businesses.
In 1972, Ken and Margie married and settled in Wiley, where they would live for the next 49 years. A son, Andy, was born in 1975. A daughter, Becky, joined the family in 1977, and another son, Robert, entered the scene in 1981.

In addition to entrepreneurial endeavors, Ken invested in numerous community and civic organizations, including the Wiley Lions Club, the Melvin Hendrickson school board, the Lamar Land Use Commission, and the Brew Board. He even served several terms as Mayor of Wiley.
Ken did not know a stranger and had deep compassion for people - especially those who needed help. He loved football, animals, and all things related to Wiley. He preferred simple things; homemade apple pie and/or cinnamon rolls were his favorite gifts. He watched sunrises and sunsets with equal appreciation, and found it easy to love the sparse beauty of the prairie. A gentle and soaking rain brought him joy, as did a hearty laugh and his family.

Ken was diagnosed with colon cancer in late June. For the last several weeks of his life, Ken was accompanied around the clock by Margie and/or one of their kids. Ken left us in the early hours of a beautiful summer morning, July 14, 2021.
Ken is preceded in death by parents Victor and Rosalie Ullom, brother Don Ullom, and brother-in-law Darrel Jones. Ken is survived by his wife, Margie Ullom of Wiley; sister Rosi Jones of Antelope, CA; sister-in-law Elly Ullom of McPherson, KS; son Andy (LeAnna) Ullom of McPherson, KS; daughter Becky (and Patrick) Naugle of Gilberts, IL; son Robert (and Andrea) of Wichita, KS; and grandchildren Jonathan Ullom, Jackson and Ethan Naugle, and Lauryn Ullom.

A memorial service will be held on July 24, 2021, at 10 a.m. at the Wiley Community Church. The service will be available online (Facebook, Wiley Community Church page, https://www.facebook.com/wcc.church.house). In lieu of flowers, memorial contributions can be made to Camp Colorado. Give online at https://tithe.ly/give_new/www/#/tithely/give-one-time/574044 (please put ‘Ken Ullom memorial’ in the notes field), or send a check made out to “Camp Colorado” to Camp Colorado, P.O. Box 4021, Parker, CO 80134.