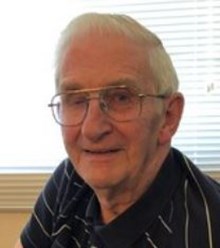 He was born the 8th of 11 siblings, on March 16, 1932 in Caro, Michigan to Charles and Dorothy (Putnam.) Larry joined the Air Force in March of 1952. He spent some time in England, then was stationed in Salina, Kansas. It was in nearby Miltonvale that he met the love of his life, Phyllis Jean Walker. They were married on March 6, 1954, in Miltonvale.

Larry’s occupations included working at a brickyard and alfalfa mill in Kansas. In 1958, he moved the family to Loveland, Colorado. There, he worked at a brickyard until getting jobs manufacturing mobile homes at ABC, Continental, and Red Dale Coach Factory. He was employed at Red Dale for 16 years. 1978, Larry took a job at Eastman Kodak in Windsor, where he worked until retiring in 1991.

Larry loved gardening, fishing, camping, and exercising. He grew a bountiful harvest yearly, and nurtured beautiful roses around his home. He cherished time with his children, grandchildren, and great-grandchildren. Christmas at the McLellan house was always a special time, with great food and feet of wrapping paper left on the floor.

He spent his final years at the Wexford Retirement Community in Loveland, Colorado, where he enjoyed great companionship with friends old and new, good food, and doing community activities.

He is survived by his two daughters, DiAnn Cumings (Timothy) of Windsor and Deniece Curtis (Robert) of Longmont; and brother Theron, of Caro, Michigan. He was also survived by 10 grandchildren, 10 great-grandchildren and many beloved friends and relatives. He will be deeply missed by his family, friends, and all who knew him.

He was proceeded in death by his parents, his wife, Phyllis Jean; son, Daniel; and 9 siblings.

The family will conduct private services.

In lieu of flowers, contributions may be made to Meals on Wheels of Loveland and Berthoud, 437 N Garfield Ave., Loveland, CO 80537, or at lovelandmealsonwheels.org