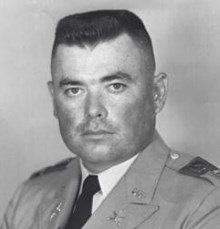 JL was born July 11, 1930 in Goodland, KS to Charlie and Maggie (Laughlin) Hooper. JL’s sister, Lois Berringer, was 13 years old when he was born and helped raise him on the family farm, where he worked with his family until he went to college. As a teen, his expertise with cattle was highlighted in 1948 by being awarded Champion Junior Showman at the Colorado State Fair. JL graduated from Wray High School in 1948. He attended Colorado State University and Colorado A&M, earning a Bachelor of Science degree in Animal Husbandry. He was also a member of ROTC at CSU.

JL met Joann Arlene Speiser at CSU and they married in Ft. Collins, CO in 1952. He entered the U.S. Army in 1953. His service took him to bases all over the world, including Germany and Japan. JL served in Korea and two tours of duty during the Vietnam War. He was awarded three bronze stars. One of JL’s proudest moments while serving in the Army was escorting President John F. Kennedy through the ranks in Georgia during the Cuban Missile Crisis. In 1973, JL retired from the Army after twenty years of service as Major Hooper.

Following his retirement from the Army, JL and Joann settled in Longmont, where he owned Hooper Water Hauling. He also worked as the Fleet Maintenance Manager for St. Vrain School District for fourteen years before retiring. His retirement was highlighted by spending winters with Joann in Arizona, where he enjoyed the desert southwest.

JL loved music and theater. He acted in several Longmont musicals. He also played a bit part in the original movie Dumb and Dumber, filmed in Estes Park, CO. He loved singing and was a member of the Central Presbyterian Church Choir, and The Longmont Barber Shoppers. One of his favorite activities was taking his family to the mountains backpacking, camping and fishing. He belonged to the St. Vrain #23 Masons and was a Shrine Member.

JL was a loving protector of his wife and children and would do anything for his family. He will be greatly missed.

A Private Family Gathering will be held Saturday, March 27, 2021. In lieu of flowers, please consider donating to “The Friends of the Colorado Talking Book Library”. Visit www.ahlbergfuneralchapel.com to leave a message for his family.