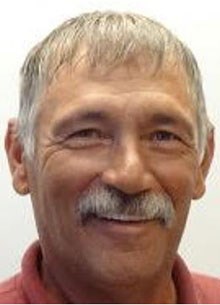 Mark Randall Stoker was born to Leland and Donna Stoker February 12, 1960 at La Junta, Colorado and passed away peacefully knowing he was going to heaven on January 7, 2021 at his home in Bethune, Colorado with his loving wife Louise by his side. Mark enjoyed having fun. In his early years he did a lot of coyote calling, deer, antelope, bobcat, and bear hunting.

Louise went hunting with him some of the time. He had a lot of old hunting friends and they always had a lot of stories to tell. Later in years he took up golfing and that turned into his next passion and enjoyment. Louise also golfed with him and of course he had many golf buddies and they always had to challenge each other to see who had to pay up at the end of the day. In 1985 Mark went to work for Kit Carson County as a loader operator. He was a good operator and Pit Boss and loved doing it. In 1995 Mark started working for the State of Colorado on the Highway Maintenance Crew as TM1. This is where he met the Love of His Life Louise. In 2010 Mark became TM2 and Boss over the Burlington crew. In 2014 Mark became TM3, Boss over more crews. In 2018 after 23 years Mark retired and enjoyed a lot more golfing.

In the fall of 2018 Mark’s favorite job came open as Loader Operator and Pit Boss in Burlington and he took the job until his cancer forced him to quit. Mark was married to Cindy Andrews in earlier years and they had two daughters Heather and Mindy. Preceding Mark in death was his infant brother Aaron and his parents Leland and Donna Stoker. Mark is survived by wife Louise, daughter Heather (Danny) Fitts, Grandsons Clayton, Hayden, & Jackson, daughter Mindy (Jerry) Mann and grandsons Drake and Riley & granddaughter Naelynn. Louise’s children; Kenneth (Sharon) Einspahr, Granddaughter Deserea Einspahr & Ashten Larson, great grandsons Ryder & Knox, daughter Michaelene (Bill) Powell, grandson Dakota & granddaughter McKenzie. Mark is also survived by his sister Cindy (Sam) Sholes. Memorials may be made in Mark's name and may be left at or sent to the Bank of Burlington in Burlington, Colorado.