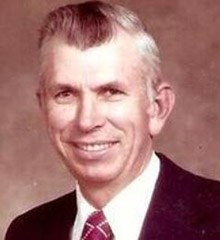 Melvin LeRoy Haack of Loveland died at Medical Center of the

Rockies Wednesday, September 9, 2020 after a series of small strokes.

on their farm near Bird City, Kansas. As he grew up times were hard

through the Great Depression and Dust Bowl years. After serving in the

1947), Melvin returned to farming with his father. He took flying lessons

under the GI Bill, earning his private pilot’s license.

had a wheat and dairy farm where their children Rick, Brenda and Becky

move to Loveland, Colorado in 1960 where he purchased a service station,

Mel was a faithful and active member of Zion Lutheran Church

serving as a Stevens Minister for many years. In his lifetime of kind and

compassionate service to others, he delivered Meals on Wheels and

worked at the Community Kitchen. After moving to Loveland’s Good

Samaritan Village, he also donated his time working at their Community

Store. His ultimate gift was tissue donation at the time of his death.

Melvin was preceded in death by his parents, brother Norman and

He is survived by his wife of 72 years, Mary Jo; son Rick and wife

“daughter” Kim Vellekamp of Indio, CA. He is also survived by 10

Melvin will be inurned at the Zion Lutheran Columbarium. A

Memorial donations may be made to Zion Lutheran Church at 815 E.

Clinton "Clint" Ross Bean
Sep 23, 2020 4:59 PM
Comments
We welcome your feedback and encourage you to share your thoughts. We ask that you be respectful of others and their points of view, refrain from personal attacks and stay on topic. To learn about our commenting policies and how we moderate, please read our Community Guidelines.