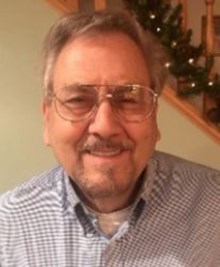 Michael F. Lepore of Estes Park Colorado left this life peacefully on Friday, April 30 at the age of 76. Michael was born to Violet Sofia Lepore and Michael Felix Lepore on April 7, 1945 in Bay Ridge, Brooklyn New York. He was married to his teenage sweetheart, Charlene (Oliver) Lepore, whom he loved to call his “Sweets” and to whom he was married for 58 years.

Michael moved his family to Boulder, Colorado in 1972, then to Greeley, and took early retirement from AT&T Bell Labs, Denver, in 2000 after an accomplished career as an electrical engineer. Upon early retirement Michael and Charlene built their dream log home in Estes Park, Colorado. He attended St. Patrick’s Parochial School in Brooklyn New York, then Brooklyn Vocational and Technical High School. After retiring from his professional career, Michael earned a Bachelor of Liberal Arts from Regis University in Denver, Colorado.

Michael had a life-long interest in electrical technology, he was a ham radio operator, and an avid model train engineer and collector since his boyhood days in Brooklyn. His first love has always been his wife Charlene, and he claimed his six children and 11 grandchildren as his most proud accomplishments.

Known as Grandpa Choo Choo (“Chooch”) to his grandkids, he loved spending time with and watching each of them grow and experience life. He was especially prideful when attending their school programs, sporting events, graduations, and other life achievements. Michael also enjoyed researching family genealogy, playing chess, reading history, spending time with his dog Rocco, and enjoying Nonna’s delicious pasta, sauce and meatballs on Sunday afternoons.

Michael is preceded in death by his parents, his brother Paul and sister Victoria. Michael is survived by his wife, Charlene, his six children, Michael, Peter, Regina Lowrey, Christopher, Jonathan, and Jeremy, their respective partners and children. He is also survived by his siblings Peter and Joseph Lepore.
Michael, a loving husband, father, brother, and friend, will be dearly missed. His earthly loss is Heaven’s gain.

Mass services to be held at Sacred Heart Catholic Church in Boulder, Colorado, 10:00am Tuesday, May 4. Burial will immediately follow Mass at Green Mountain Memorial Cemetery.