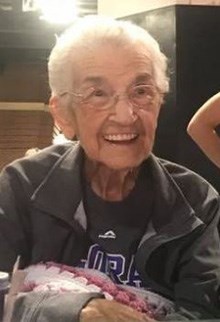 Opal was born on October 24, 1926 to Ruth and Andrew Malik of Milliken, Colorado. She graduated from Milliken, CO in 1944. Opal was employed at the post office in Milliken until 1948 when she married Ralph Wetzbarger of Loveland, CO. They were married in Fort Collins, CO on May 15, 1948.

They lived most of their lives on the Front Range, but moved to Clifton, CO in May of 1992.

Opal was very proud to be a Colorado Native and was very pleased when she got to acquire her “Pioneer” license plate.