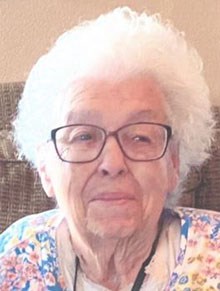 Peggy J. Kimble, often called “Peggy June” by her late husband, passed away on November 15, 2020, at the Aurora Medical Center. She was 89 years old. Peggy was born on October 11, 1931, in Wilson, Texas, to Jesse Cummins and Salema Cummins. Peggy had two sisters, Patsy Gaede, now deceased, and Sue Hodges, of Pueblo, Colorado. While Peggy was in high school, her family moved to Limon, Colorado, where she met Donald Kimble. Peggy and Donald Kimble were married on June 10, 1951. After graduating from Limon High School in 1949, Peggy attended secondary schooling for business and secretarial work. Though she worked as a secretary for a few Limon businesses, her great love was being a wife and mother, which she was exceptionally good at. Peggy was regularly active in her church, taking her turn serving and leading in many church women committees and organizations.

She also found time to be in the Limon Womens Sewing Club and was a hostess for the many music professors, teachers, and clinicians who came to Limon at her husband’s request, to work with the Limon bands. Peggy accompanied Donald on the many Limon Show Choir and Limon High School statewide functions, building wonderful memories. In their later years, Peggy and Don enjoyed traveling through America and also enjoyed working at the Limon Heritage Museum. Peggy was an avid reader and enjoyed sewing and attending school events. She eventually became an avid Broncos fan displaying surprisingly loud satisfaction, or dissatisfaction, as the case might be during Broncos games. She will be missed for her shrewd observations and wit which were present at all family gatherings. Peggy is survived by her children: Stan (Diane) Kimble of Limon, Colorado; Tracy Kimble, of Burlington, Colorado; Scott (Robin) Kimble of Limon, Colorado; and Casey (Cynthia) Kimble of Centennial, Colorado. Peggy is also survived by her grandchildren: Kaitlyn Bennett, Sayla Kimble, Abigail Yilmaz, Thomas Harrison, Tim Kimble, and Tyler Kimble, and a great granddaughter, Lyra Isabel Bennett. Peggy is also survived by her sister, Sue Hodges.

Memorials can be made to the Limon Public School-Music Department, P.O. Box 249, Limon, Colorado, 80828, to be used for the Instrumental and/or Vocal Departments. The funeral service arrangements were made through Love Funeral Home of Limon, Colorado.

James Rector
Dec 2, 2020 2:01 PM
Comments
We welcome your feedback and encourage you to share your thoughts. We ask that you be respectful of others and their points of view, refrain from personal attacks and stay on topic. To learn about our commenting policies and how we moderate, please read our Community Guidelines.