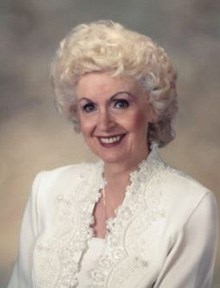 Raedeene Compagno passed away, Monday, October 12th, 2020 and has now joined our Lord in heaven.

Raedeene was born on December 21, 1930 in Moline, Illinois, the first daughter of William and Edna Neal.  Raedeene married Sam Compagno on July 28, 1951 in Rock Island, Illinois.  Raedeene was preceded in death by Sam in August, 2019 and by their daughter Cynthia Catherine in November, 1965.

Ever driven, determined, and delighted with life, after graduating from high school, Raedeene began her first career as an operator with the local telephone company in Moline. Her melodic voice and effervescent, engaging demeanor greeted callers for several years as she worked behind the switchboard and as a supervisor.  Years later after a move to Wyoming with Sam’s career, Raedeene attended Casper Community College and graduated with an associate’s degree in journalism.  When the family moved to Denver, Raedeene began nearly a thirty-year perfect-fit profession as an employment counselor for Snelling and Snelling, where she, in turn, placed job seekers in their own perfect-fit positions, resulting in her earning multiple top sales awards along the way.  At the same time, she adopted her desk name “Kay” which her colleagues found easier to spell than Raedeene and became her go-to nick name with her co-workers and friends.  Raedeene loved singing in the church choir and had an enthusiastic, creative side that included making beautiful flower arrangements, elegant adornments for wedding tables, festively decorating the family home for the holidays, and overnight marathons sewing First Communion dresses and other special occasion fashions for her daughters and herself.  Every spring brought a special rite of passage and reflection of her beautiful, sweet nature when she tended her small garden in the front yard, joyously planted red roses in abundance and nurtured them into full bloom.

Manuel G. Castillo Escarsega
Oct 24, 2020 12:04 PM
Comments
We welcome your feedback and encourage you to share your thoughts. We ask that you be respectful of others and their points of view, refrain from personal attacks and stay on topic. To learn about our commenting policies and how we moderate, please read our Community Guidelines.