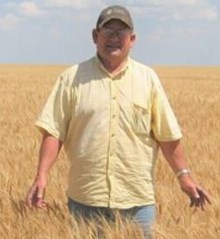 Bob was born on May 31, 1947 at the family ranch in a dugout outside of Springfield, Colorado to Wilma (Bishop) and Lester Wallace.  Lester told Wilma if she gave birth to twins, he would build her a house above the dugout, so Wilma gave birth to twin boys Robert (Bob) Lee and William (Bill) Otis. Bob, Bill, and their older brothers LD and Leslie were raised on the ranch, where they farmed milo and broomcorn, as well as ranched cattle and raised Shetland ponies. The brothers attended the Sandy Soils one room schoolhouse until high school where they attended and graduated from Springfield High School.

In 1965, Bob and Bill started college and played football at Southern Colorado State College in Pueblo. Bob’s twin brother Bill tragically passed away in a car accident between their freshman and sophomore year. Bob continued his education in Pueblo, where he met his wife, Annette. In 1970, Bob and Annette were married in Annette’s hometown of Walsenburg. After they were married, they returned to Springfield to teach school and Bob also coached football at Springfield Junior High School.

In 1972, Bob began working at the feedlot and doing custom harvest work with his brother Wally around Baca County. In 1975, Bob and Annette purchased the Wallace Family Ranch located ten miles south of Springfield, where Bob farmed dryland wheat and milo, and raised cattle. While on the farm, Bob and Annette welcomed three children – Rhett, Dara, and William (Chase). During this time, Bob added on and remodeled the family home, which had previously belonged to his grandfather Bishop. Bob was very proud of the work he did and the spirit of hard work he passed on to his children and grandchildren.  Bob always joked and said, “I can fix anything but the crack of dawn and a broken heart.”  Along with the never-ending work on the farm and ranch, Bob was also involved in the community, serving on the boards of the Springfield Grain Cooperative, People’s Credit Union, and FSA Community Service.  He also volunteered his time coaching several pee-wee programs.

In 2012, Bob and Annette decided to retire, sell the farm and follow their children to Northern Colorado, making their home in Loveland. In retirement, Bob has enjoyed making friends at the gym in Loveland, fishing in nearby Boyd Lake, and most of all, being closer to his children and grandchildren, seeing the grandchildren grow up, play sports and perform in different school programs.

Bob was known to always have an opinion about something – and always willing to share it with whoever would listen to it. While his opinions were big, his heart was even bigger. If you were lucky enough to be considered a friend, you knew you had a friend for life.

Bob is preceded in death by his parents Wilma and Lester, and his twin brother Bill. He is survived by his wife Annette, his children Rhett (Shawna) Wallace, Dara (Patrick) Miller, and Chase Wallace, as well as his brothers Leslie and LD. He is also survived by his beloved grandchildren, who brightened his days more than anyone – Evan, Emma, Faith, Owen, and Evylene.

Arrangements are being handled by Kibbey-Fishburn in Loveland.  The family will provide details regarding the Celebration of Life at a later date.