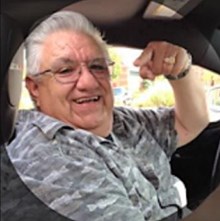 Robert Vigil arrived into this world on November 4, 1946. He came in loudly and left us quietly. His mother, Erminia and father, Audenago welcomed him along with 5 brothers and 5 sisters. Bob, as he would come to be known, was number 11. After him would follow 4 more brothers and 4 more sisters for a total of 19 children.

Bob grew up in Berthoud, Colorado, graduated from Berthoud High School and was drafted into the Army. While in the service he did a year tour in Vietnam and achieved the rank of Sargent. Once out of the military, he met the love of his life, JoAnn. They were married and blessed with two children, Heidi and Robert. Years later, they were blessed with 2 granddaughters, Hayley and Kyley.

Bob loved the outdoors, fishing and hunting. He wasn’t able to do things in recent years, but he could relive the memories.

Bob worked at Hewlett-Packard for 25 ½ years doing a job he loved. He enjoyed working with his hands making parts and repairing things. So in facility maintenance, he found his cup of tea.

At the age of 33, in 1979 he was hit by a drunk driver while on his way to work riding his motorcycle. With these serious injuries, he was plagued with chronic pain for the rest of his life. He returned to work after the accident, but years later left his dream job to pursue the ministry.

He became a pastor with a congregation in Berthoud. He had a love for his God, his family, friends and country. He left this world headed for glory quietly and peacefully to be with his Lord and Savior Jesus Christ on Monday, November 16, 2020.

He is preceded in death by this parents Audenago and Erminia, brothers, Nick, Thomas, Derald, Juan, David, Alex, Ben, and sisters Dolores and Mary.