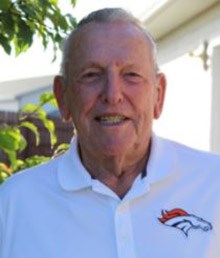 Ronald Morris Allen passed away on May 1, 2021 in Lusk, Wyoming surrounded by loving family.

Ron was born on July 9, 1935 in a farm house in Phillips County, Kansas to Morris and Laura (Hull) Allen. When Ron was 4-6 months old his family moved to the Rinn area which is just east of Longmont, due to the dust bowl in Kansas. Ron grew up on the family farm off of I-25 and highway 52 spending time farming alongside his Dad and Mom.

Ron attended school in Erie, Colorado where he also participated in Football and Basketball. After finishing school Ron continued to farm with his parents and also worked at Denver Pack in Denver, CO.

Ron met the love of his life one afternoon while playing horseshoes with his buddy. After a blind date, and two years of courtship, Ron and Beth (Snyder) were married on September 19, 1954 in Niwot, Colorado. They worked side by side farming during the day while Ron worked night shift at the sugar factory in Longmont, all while raising their family and creating memories for over 66 years.

In 1970 Ron and Beth retired from farming and they took employment with the St. Vrain Valley school district where Ron quickly advanced to the position of Custodial Supervisor over the entire district. Ron and Beth decided to retire early from their positions in 1992 after 21 years, as they wanted to travel and spend time with their children and their families. Ron and Beth spent the next several years in their motor home traveling, camping and fishing.

His devotion to his wife and family are a true testament to the man he was. His guidance and ability to be a role model earned him the respect of not only his family but of friends and acquaintances.

Ron had several hobbies the most fun being dancing with his loving wife. They took country dance lessons and joined the Moose Club where they danced the night away. Other hobbies included cooking, garage sales, meeting new people and guiding hunters at the ranch in Wyoming.

Ron was preceded in death by his father Morris, mother Laura, and Sister Peggy.