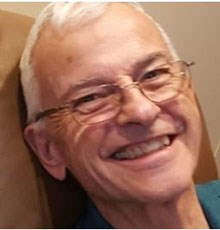 Ron was always ready to go for an adventurous ride: a rough and tumble sail through a Caribbean hurricane, a drive to the mountains for camping and fishing, a day of trials riding at Rampart Range, a spin in his uncle’s speedboat on Lake Ogallala, a swoosh over the snow with his kids and their friends in a saucer tied to a three wheeler, a little drag racing (who knew Goldwings could do wheelies?!), a seven states in 24 hours Iron Butt challenge with his Christian Motorcyclist Association buddies (who may have regrets about making him Road Captain that year!), a white-knuckle jaunt over Mosquito Pass with his brother, a 3,000+ mile Goldwing excursion to Alaska and ride back with his daughter, a week cruising the Inside Passage and Glacier Bay with his beloved wife, family and friends aboard, a solo kayak paddle in Auke Bay with only a smile and a wave from the outfitter as training, a buzz around the neighborhood with the dog on the scooter, and of late, a medical lift version of hang-gliding. So, on November 16, 2020, after a years-long struggle with a rare brain disease that Ron liked to explain was “all in his head,” when the Good Lord showed up at their regular early morning meeting in his sweet chariot, Ron was ready to go! He died peacefully at home with loved ones by his side.

Ron was born in Ord, NE, (1944) to Melvin and Rilva (Hutchinson) Hackel. With his older brother Elvin, Ron grew up in overalls in Nebraska until the family moved to Ft. Morgan, CO (1956). In Ft. Morgan, Ron, attended school, worked a paper route with his trusty cocker spaniel Pat, and spent time in various activities, still best left unaccounted according to those who know, with lifelong friend Dee Haarhughes. At the age of 17, Ron enlisted with the US Navy and served both as a mechanic aboard the USS Tutuila and an airstrip firefighter in Jacksonville, Florida. He came home to marry the beautiful baton twirler he had asked to a dance when he was 15 years old. On Easter Sunday 1965 Ron and Jeannie (Lovenburg) Hackel were married. It is purported that Jeannie whispered something like, “I’ve gotcha now!” to the handsome, crooked-smiled sailor on their way out of the church. As you can imagine, a 55 year marriage includes some memorable incidents. You will have to ask Jeannie about Ron’s gift of baby rattler tails, recruiting her help to give himself his own stitches, his garden weeding (aka: pulling up her flowers), and his short-lived stint as her hair wash assistant.

Ron attended trade school at Southeast Community College in Milford, NE where his love of metal fabrication was kindled. Ron’s uncanny ability to float a fully-formed 3-D image of any project in his mind and keen desire to honor God with integrity and precision in even the smallest job, carried him from HVAC installer to consummate drafter and estimator to owner and operator of Design Metal Manufacturing (Ft. Collins, CO), the only sheet-metal fabrication, welding, and machine job-shop in Northern Colorado. Ron relished the challenge of bringing people’s ideas to fruition and improving designs to better meet their needs. He loved the odd walk-in jobs and was fond of pointing out that his work for the robotics industry provided unique job security because no matter how many robots took over manufacturing they would always need someone to design and build their parts. Ron was always grateful to God for providing work and the ability to create good jobs for employees, which, as the company grew, in turn, meant more people with which to share jokes. One was just as likely to hear the stamp of the turret punch as one was the roar of laughter on the shop floor.  As he liked to reflect upon the resilience of his industry, “Someone always needs some metal bent!” For example, if you have ever enjoyed the smooth, sanitary, perhaps shockingly cool experience of a Rocky Mountain National Park stainless steel toilet, you have likely enjoyed Ron’s handiwork.

Perhaps it was Ron’s time in the Navy that gave him a fondness for those adrift such as: two children to whom he gave a name and home as his own, the occasional cousin or friend who needed shelter and prayer, as well as a variety of dogs. His generous heart extended to employees, strangers, and neighbors who all miss his walking the dog around the neighborhood, checking in on them, and eradicating any Canadian Thistle brave enough to grow in the sub-division. His love extended to prisoners, orphans, service as a member of the Gideons, service as an Elder in the Presbyterian church, his donation of time and expertise to care for the church building and grounds and thereby all the folks who worshiped and gathered there, and his 45 years of participation and leadership in the Christian Motorcyclist Association.

Ron exercised kindness and gentleness with others because he knew that the Lord Jesus had been kind and gentle to him. Even when faced with the debilitating effects of a disease that gradually stole his balance, coordination, and the ability to speak Ron kept laughing, kept eating his oatmeal and reading his Bible every morning, and kept faith that even in this God had a glorious purpose and His goodness and kindness would prevail.

Ron now rejoices in glory with those who preceded him: his son Travis, his dad Melvin, and his Mom Rilva. Those he left to finish their race are: his brother Elvin, his wife Jeannie, and his daughter Tracee, as well as many beloved extended family members.

In lieu of flowers, donations to the Christian Motorcyclist Association (CMA) or Mountain View Presbyterian Church (MVPC) and any other condolences can be sent care of Kibbey-Fishburn Funeral Home, 1102 Lincoln Avenue, Loveland, CO 80537.

A private burial will be held and a public memorial celebration of Ron’s life will be planned for a future time to be determined.

NOTE: If you think this obituary is long, it is. Ron is entirely responsible for this too. Since the day I smiled at him in the social worker’s office (I was only three months old, so there is always the possibility it was gas, but he has always insisted that it was a true smile), Ron has apparently liked to spend time with me. He thought it was fun, when I started talking, to teach me a lot of big words like “Afghanistan”. It is his fault that I have loved lots of words ever since! Thank you for taking time to read so much about the man I was so deeply blessed to have called, “dad”. tdh