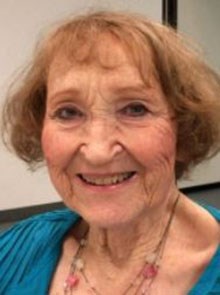 Ruth Evangeline Cooke was born at home on October 23, 1935 in Coolidge, Kansas to William Ira Turner and Bonnie Ruth Turner and passed away on January 5, 2021. She was number 9 of 16 brothers and sisters, 8 of whom are living: Violet, Ted, Carolyn, Phyllis, Bonita, Steve, Ben and Sunday.
Ruth spent most of her childhood in Pueblo, Colorado but the family moved around Colorado and Kansas as employment was often hard to come by in the years following the great depression. She graduated from Holly High School in Holly, CO in 1952. Following high school, Ruth moved to Indiana to live with her sister Deanie for several years.

Ruth married Norman Gardzelewski in 1959 and was blessed with her first child, Ann in 1963. Norman passed away in 1965 and that is when Ruth moved to Boise to again live with her sister Deanie who was pastoring the Church of God with her husband Bob.
Ruth graduated from the St. Alphonsus School of Nursing in Boise in 1968 and began a career as a Registered Nurse. She worked at St. Alphonsus Hospital and the Veterans Administration Hospital on and off for 40 years.

In November of 1968, Ruth married Richard Cooke and gained 2 sons, Bob and Jeff who were 8 and 7 years old. For approximately 20 years, Ruth and Richard led a small church in Atlanta, Idaho and spent the Summer months there. Ruth’s skills as a nurse were utilized dozens of time for life-saving emergencies in Atlanta, as there was no formal medical care between there and Boise. During this time Richard and Ruth also adopted another son, Richie.
Richard and Ruth were divorced in 1999 and Ruth began serving as an interim missionary nurse in Kenya, Africa. Ruth would relieve the full-time staff at the Kima International School of Theology while they took annual vacation. Ruth had a special calling for the people of Kenya and in 2008 she co-founded the HEMAMA Children’s Resource Center in Kima, Kenya. HEMAMA provides teaching, nutrition and educational resources with the goal of eradicating poverty among the people of Kenya by helping them help themselves (HEMAMA.org). Ruth’s last trip to Kenya was in 2014 when her health challenges began to accelerate. She has remained active in sharing her vision and passion for HEMAMA so that others could be blessed by assisting this valuable ministry financially and with their time and prayer. Ruth also was an ardent supporter of Wycliffe Bible Translators, a non-profit organization that seeks to start a Bible translation in every language that needs one.

Ruth loved and has been involved in her church, Treasure Valley Bible Church in Boise since 1999 and greatly missed being able to attend in person during these last days.
Ruth is Survived by 3 of her children: Daughter Ann Hoopes and Sons Jeff Cooke and Richie Cooke; 8 grandchildren: Chris, Chad, Candice, Brett, Jay, Ryan, MaryAnn and Jenny; 11 great grandchildren, 8 brothers and sisters, dozens of nieces and nephews and countless others who know her as one who loves God. Ruth was preceded in death by her son Bob and granddaughter Angela.
Services are under the direction of the Peacock Family.