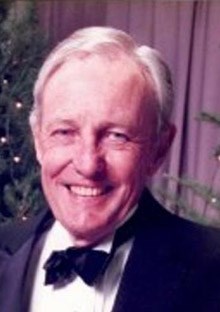 H. Lee (or Lee) Sturgeon, accountant, banker and investor, passed away on March 20, 2020 at his residence in Louisville, Colorado.

He was born in Liberal, Kansas to Halbert C. Sturgeon and Lottie Lyle Hutton Sturgeon. Lee grew up in Hugoton, Kansas before attending Kansas University in Lawrence. There he obtained his Bachelor of Accounting degree. Lee served stateside for a year and a half as an accountant in the Air Force during the Korean War. Meeting in a ballroom dance class in college resulted in Lee and Vinita Louellen Bradshaw's wedding in Lawrence, Kansas on February 21, 1953 Theirs' was a marriage of 64 years. The Sturgeons initially moved to Rocky Ford, Colorado where their two children (Shauna Lee Rhine and Lynn Bradshaw Sturgeon) were born. In Rocky Ford, Lee worked as a banker.

Eventually they relocated in Boulder, Colorado where they lived for 50 years prior to their last move to Louisville. Lee worked as an accountant for Arthur Anderson. He also taught accounting for two years at the University of Colorado in addition to being a CPA at home. Always interested in accounting and finance, Lee invested in Cortec and other startups. His grandchildren remember their grandfather's interest in Biotech even before it became well known. When not working in the field of accounting or golfing, Lee could be found on his motorcycle touring the United States well into his retirement. He enjoyed making model airplanes and rockets, often sharing this with his grandson Daniel during summer visits. These visits to Colorado from Michigan found the grandchildren, granddaughter Kelsey and her brother Daniel, staying for a month or two at Cheley Colorado Camps.

They remember this as their special time as a family, a memory they cherish. A life-long fan of the Jayhawks, Lee especially enjoyed watching the rivalry with CU-KU football games. Lee also loved to watch KU basketball games. His grandchildren remember him as a very serious, smart person, honorable to a fault whose sense of humor emerged later in life. He valued education, wanting his grandchildren to be successful in their various pursuits, productive, and a benefit to those around them. A member of the Boulder Country Club and the Republican Party, Lee also enjoyed Fox News and the daily paper. Most of all, he loved chocolate and a good steak! Lee Sturgeon was preceded in death by his parents, sister Helen Marie Sturgeon, wife Vinita Sturgeon and daughter, Shauna Lee Rhine. He is survived by his son Lynn Bradshaw Sturgeon, grandson Daniel Aric Clarke (daniel_clarke @comcast.net; Nashua, New Hampshire), and granddaughter, Kelsey Jeanne Schiller (Dave; Alanson, Michigan).