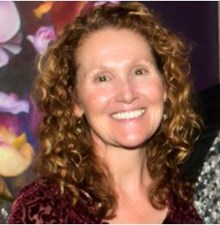 Suzanne Fountain, 59, of Broomfield, Colorado died tragically on March 22, 2021, a victim of the Boulder, Colorado, King Soopers shooting.  She was born August 31, 1961, in Flemington, NJ. In 1963 her family relocated to Clinton Corners, New York.  Suzanne graduated from Millbrook High School in 1979 and attended The College of Saint Rose in Albany, NY.  Following her passion for theatre, she studied acting at Circle on the Square in New York City. Suzanne moved to Colorado in the early 1980’s where she made her home.

Suzanne was a very active member of the Denver and Boulder theatre community.  She appeared in several performances including Wit, The Glass Menagerie, Voice of the Prairie, Woolgatherer and Agnes of God. She was the house manager of eTown, a non-profit dedicated to the arts and environment.

Suzanne worked for several years at Nancy’s Restaurant in Boulder. She was also a Financial Counselor at Boulder Community Hospital. In 2018, she began working for Medicare recipients and became a licensed Medicare Insurance Agent helping people over 65 years of age sign up and receive benefits.

Suzanne is survived by her son, Nathaniel Getz, of Philadelphia, PA and her partner, Philippe Bernier, of Broomfield, CO.  She is also survived by her loving parents, Harold and Marjorie Fountain of Clinton Corners, NY; sister, Julia Amato, Clinton Corners, NY; sister, Jennifer MacAskill and her husband Edward of Millis, MA; brother, Phillip Fountain, Kansas City, MO; and brother, David Fountain and his wife Amy of Millbrook, NY.  Suzanne also has several nieces, nephews, aunts, and uncles who will miss her dearly. A true friend herself, she leaves behind a large circle of very close friends.

A public open house in Suzanne’s honor will take place between 4pm and 7pm Monday, April 12th at Rundus Funeral Home in Broomfield, Colorado. A private memorial service will be held at Rundus on Tuesday, April 13th at 11am. A second memorial service will be scheduled in the near future in New York. Donations in Suzanne’s memory may be made to the Suzanne Fountain Memorial Fund c/o Premier Member Credit Union, 360 Interlocken Boulevard, Broomfield, CO 80021 or gofundme, https://gofund.me/89e2e91e.