Outside: Longmont outdoor spaces offer lots of variety and varying rules to go with them 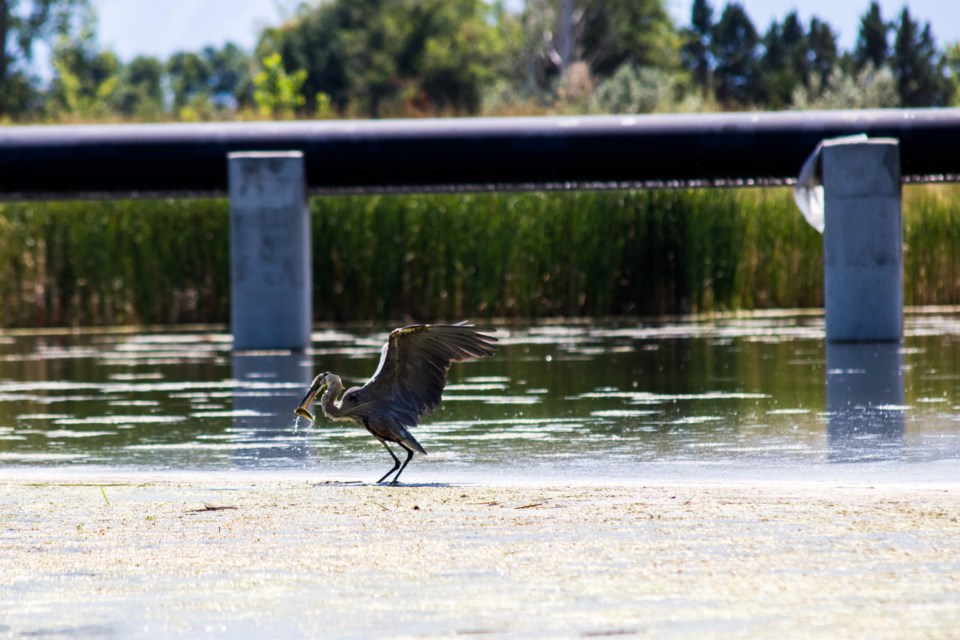 Longmont is home to nearly 2,000 acres of public land and park space, much of which is connected by more than 8 miles of trails thanks to the greenway system. With the inclusion of Button Rock Preserve and Ralph Price Reservoir, which adds more than 3,000 acres, it is a lot of area to cover for the city’s Public Works and Natural Resources Department.

It can be hard to create one set of rules for all of that land that also accounts for human use, wildlife and ecology. What works best for neighborhood parks like Thompson or Loomiller won’t hold true for Garden Acres or Roosevelt.

“A hands-off management approach would leave our parks overrun by weeds and racoons,” Bell said. 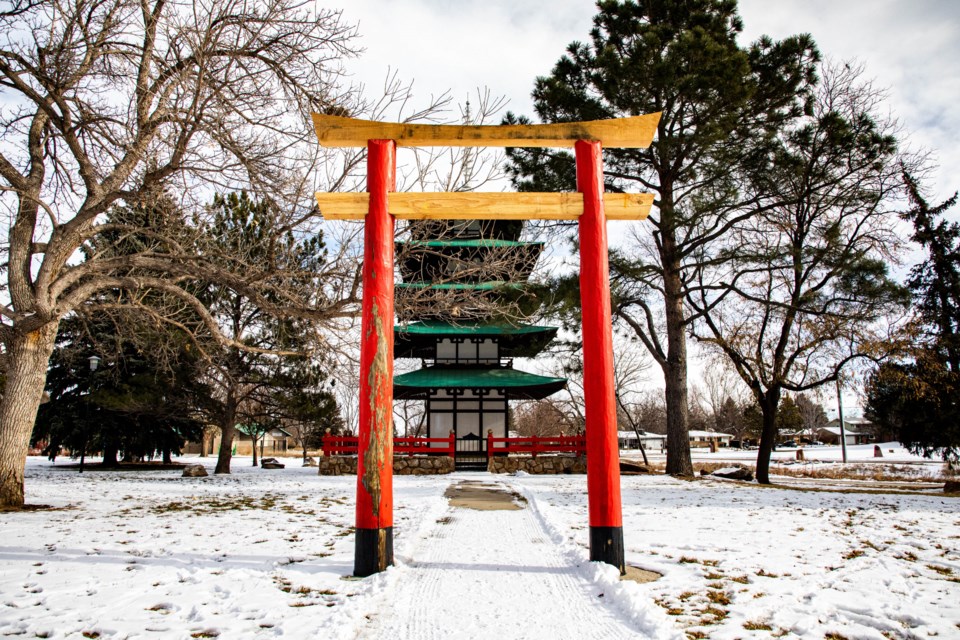 The Torii at Kanemoto Park. By Matt Maenpaa
Neighborhood parks are those in primarily residential areas, what most people think of when talking about urban parks — wide lawns and lots of trees, with play areas for children. There are 25 such parks totalling 194 acres that “provide close-to-home recreation activities with playgrounds, playing fields, sport courts, shelters, dog off-leash areas and small wheels parks,” according to the city’s website.

Rules for each park are posted on the website, but mostly dictate the hours of usage.

Though fewer in number, the six community parks— including Sandstone Ranch, Garden Acres and Roosevelt — total 259 acres. These spaces serve the community as a whole with athletic complexes, swimming pools and recreation centers.

From sporting leagues to large events, such as Left Hand Brewing’s Nitrofest, hours of usage and other restrictions support the mixed-use nature of the parks. The goal is to support “purely human-centered usage,” Bell said.

The rules become more complicated and specific for those sites the city designates as nature areas. Longmont has a healthy and diverse range of climates and microenvironments stretching from Button Rock Preserve in the west to the edges of Sandstone Ranch and the greenway system in the east.

The combination of creeks, scrub forest and wetlands create a riparian zone, a transitional zone between wetlands, rivers and more forested areas and mountainous areas. Whether natural or engineered (of which Longmont has a combination of both), experts agree these zones are vital for creating diverse habitats for plants and wildlife, as well as maintaining soil health. 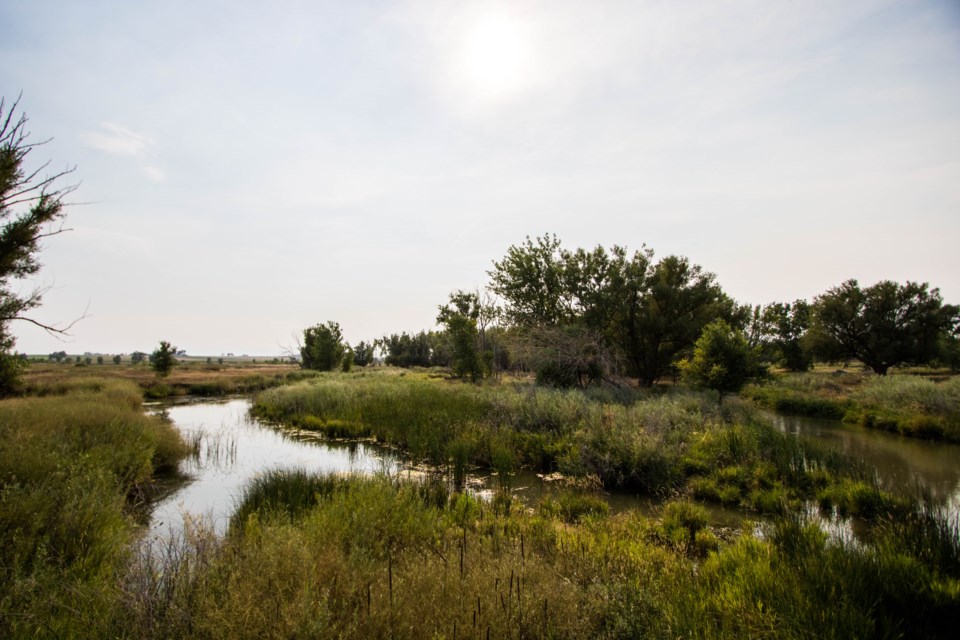 Sandstone Ranch Community Park. By Matt Maenpaa
Longmont’s nine designated nature areas comprise 1,499 acres of public space. These areas provide access to elements of wilderness close to home, as well as historical and cultural resources. Recreational use in these areas can be much more restrictive because of the need to maintain a healthy ecosystem within a semi-urban area.

Sandstone Ranch, though also a community park, has a significant natural area that is home to some species of wildlife that are less able to adapt to human presence. Because of this, and the fragility of the ecosystem around it, the city made the decision to disallow dogs in parks and nature areas east of County Line Road.

Nesting eagles and varieties of waterfowl make their homes in the creeks and wetlands, while in the grassy scrubland leading to the eastern plains burrowing owls and blackfoot ferrets make use of prairie dog colonies.

“Longmont’s park rangers focus mostly on Button Rock Preserve and Union Reservoir,” Bell said. “We don’t have quite enough staff to cover every area and enforce leash laws, so we err toward protecting the wildlife.”

Button Rock Preserve was seeing significantly increased usage even before the COVID-19 pandemic sent everyone exploring the great outdoors. An increase in visitors led to multiple dogs off leash, causing disruptions for wildlife and trail usage, and a large amount of dog waste, according to Bell.

The preserve, which is a good spot for fly-fishing, hiking and wildlife viewing, is a vital part of Longmont’s watershed and is home to Ralph Price and Longmont reservoirs, from which the city draws much of its municipal water.

Button Rock Dam at Button Rock Preserve. By Matt Maenpaa
On May 1, 2019, the city implemented an interim rule limiting leashed dogs to one per visitor. The rule will remain in place until a long-term management plan is adopted sometime this year or next.

As the city develops a management plan for Button Rock, it hired the Colorado Natural Heritage Program, or CNHP, to collect data on wildlife and vegetation. While not directly examining the impact of dogs on trails, Project Manager and Volunteer Coordinator Danielle Cassidy-Levine shared an excerpt from CNHP that is included in the draft management plan.

“Managing recreational impacts is a difficult balance between providing visitor access and quality of experience while minimizing impacts to water, soil, plants and wildlife. Humans hiking off-trail is considered one of the most disturbing activities for wildlife,” it states. “ … When wildlife flee or escape a perceived threat, they are, in most instances, evacuating an area of desirable habitat for an area of less desirable habitat.”

Additionally, CNHP stated that when humans are accompanied by a dog, the area of influence on wildlife is expanded and activity patterns of wildlife are expanded through direct and indirect interactions.

“Trails that are kept dog-free or with dogs closely restricted to trails could protect against the demonstrated ecological impacts that dogs have on wildlife communities and could facilitate wildlife viewing opportunities for trail users,” it stated.

Hours of use for Button Rock and other nature areas — one hour before sunrise to one hour after sunset — are in place to limit impacts to nocturnal wildlife such as fox, deer, coyote and pine martens, which move and hunt under the cover of night.

Originally subject to the same hours of operation as the adjacent parks and trailheads, the greenway system is now accessible for transportation 24/7.

“We wanted to encourage people to use the greenways when making the best decisions. If someone wanted to walk home from a brewery using the greenway, we didn’t want to punish them for choosing not to drive. And so long as they keep moving and aren’t gathering, it minimizes disruptions to wildlife,” Bell said. 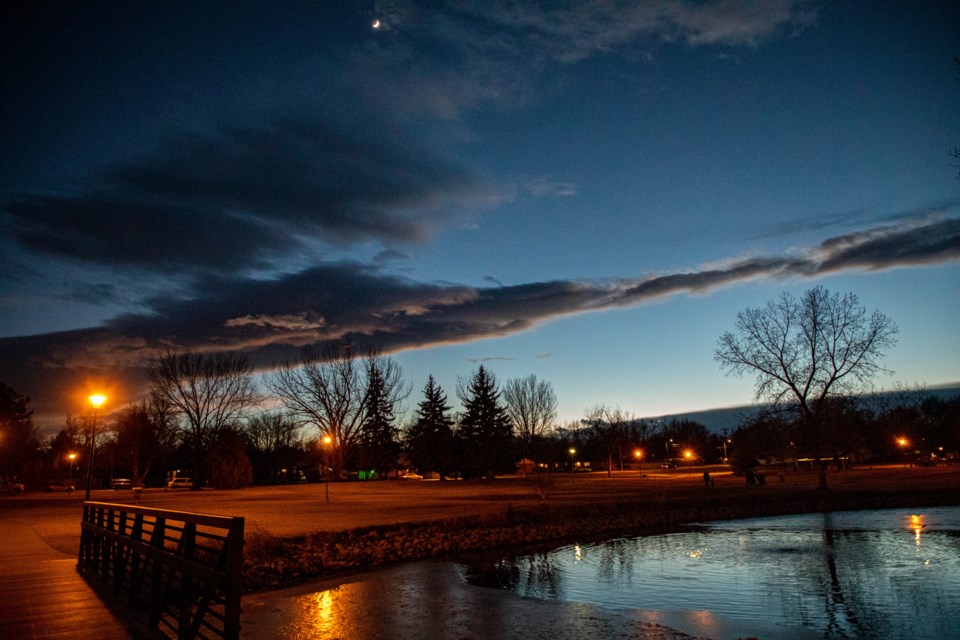 Sunset at Loomiller Park. By Matt Maenpaa
Decisions on where and how to implement rules aren’t made in a vacuum, or solely by the city. Bell and his staff rely on resident involvement and an active advisory board, along with the city council, when making park and open space rules.

“We want to make it easy for people to make good decisions. We always want to set people up for success, so that they can enjoy these spaces,” Bell said.

“It’s important that people be willing to accommodate nature, especially in areas where nature and wildlife can’t adapt to humanity as well.”

The rules for Longmont’s open spaces can be found on the city website, as well as posted at each location. Bell said the city is working to keep information up to date and easily accessible, but asked community members to help out when they can.

“By providing these different types of environments, we do expect the community to do a little more research when visiting each place,” Bell said.