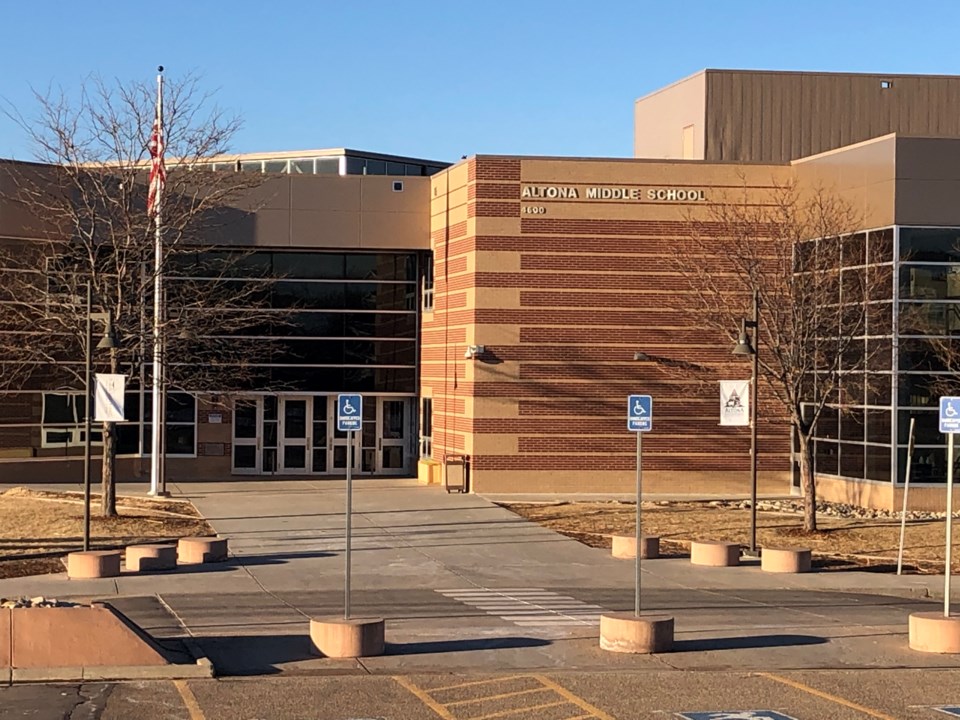 Altona Middle School in Longmont was recently designated as a 2021 Colorado Trailblazer School to Watch by the Colorado Association of Middle Level Education, or CAMLE, bringing the number of St. Vrain Valley schools with the designation to four, according to Kerri McDermid, district chief communications and global impact officer

There are 18 middle schools with the designation across Colorado, two of which were selected this year, said Diane Lauer, co-director of the Colorado Schools to Watch program at CAMLE and assistant superintendent of priority programs and academic support at SVVSD.

“The Colorado School to Watch program has been in existence since 2003 and each year we have the opportunity to review schools that are making an incredible difference in the lives of students in their communities with academic excellence, developmental responsiveness, social equity and strong internal structures and organization,” Lauer said.

Twenty states are part of the national program and at the beginning of each year, CAMLE reviews applications and a team of middle school educators conducts site visits in schools, Lauer said, adding every year between 10 and 20 schools actively seek the designation.

The School to Watch designation lasts three years and schools can reapply to maintain the designation, Lauer said.

Jeremy Lacrosse, principal at Altona Middle School, said administrators applied  for the designation, which Altona also received in 2011, to help evaluate where the school stands in terms of the program’s four pillars of excellence, responsiveness, social equity and internal structures.

“Our desire here every year is for continuous improvement and to make sure we have an outstanding school for our community and for our students,” he said. “The whole process has been something that we've been engaging in as a (team). ... It validates the work that our teachers, our staff and our students have been doing for years now.”

Altona in May will hold a ceremony to commemorate the designation as a school to watch and administrators will give a presentation in the fall at the annual Colorado Middle Schools to Watch Conference, which usually takes place in Washington, D.C., but this year will be held virtually because of COVID-19 restrictions, he said.

Altona Middle holds nine John Irwin Awards of Excellence, six Governor's Distinguished School Awards from the Colorado Department of Education, and has been recognized by Colorado School Grades as an A+ school for four years in a row, according to the website.

“I'm excited to be a part of the other schools in this network because each school does unique things to really foster a powerful learning environment. And Altona really strives to be an excellent learning environment for students,” Lacrosse said. “We really try to build a school that helps support our community. And I think, in turn, our community supports us.”

Longs Peak Middle School, Westview Middle School and Flagstaff Academy were designated as schools to watch in the past few years, making SVVSD the district with the most schools with the designation in the state, according to Lauer. The next two closest districts in Colorado are Colorado Springs School District 11 and Poudre School District in Fort Collins.

“I think (SVVSD’s) is a strong district system which creates excellence across the entire district and really leverages those strong academic foundations and the passion for elevating teacher practice,” she said.

The purpose of this Schools to Watch program, Lauer said, is to hold up model schools so they can collaborate with other schools interested in replicating successful programs, as well as instill a sense of pride in communities whose schools are recognized for their hard work and effort.

“We're really fortunate here in Colorado that we have strong standards and a strong vision for public education and truly all middle schools are trying to create the very best learning environment for their community,” she said.

“(Altona Middle) is a top-notch school, outstanding school truly, with incredible academic opportunities for students in a really engaging environment with inquiry based learning opportunities for career pathway expiration, passion for learning and their teachers are incredibly collaborative.”

Lyons students create, install wildflower garden to memorialize the COVID-19 pandemic
May 16, 2021 9:00 AM

SVVSD works with students to diversify curriculum
May 15, 2021 8:00 AM
Comments