The Video Forecast for this Week.

A couple of inches of snow around Interstate 25 Saturday followed by warm normal temperatures the rest of the week.

The wind came and is becoming a memory. The Monday/Tuesday snow chances are still quite minimal in the models. We don't get snow along I-25 (or rain) according to the GFS (Figure 2 update below).  There is a hint of more snow next Friday/Saturday, but that is a long way out. Temperatures won't vary much either, the highs will be in the 40's each day though the weekend. 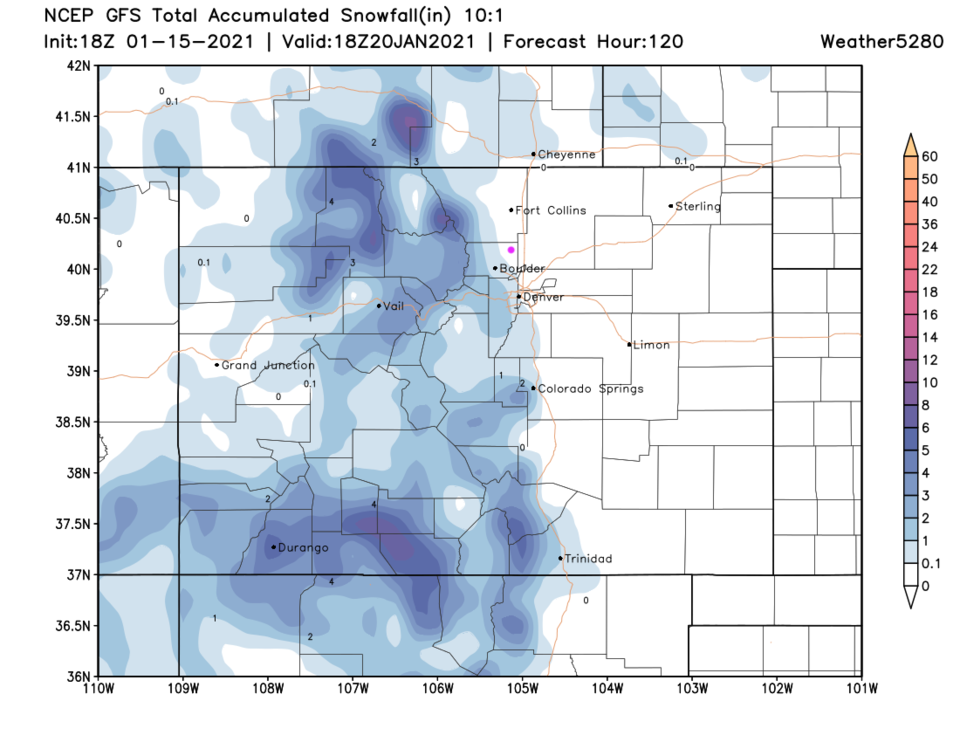 The last storm did over perform my forecast with 3 to 4 inches of snow around Longmont.  Hurray for the moisture, boo for my busted forecast.

As we work our way through a new week, there will be strong winds (and warming on Wednesday) as a dry trough passes aloft. Figure 1 update shows the strong winds on the Plains Thursday at noon.  The windy periods are also circled in Figure 2 update. In fact, the NWS has issued the following: 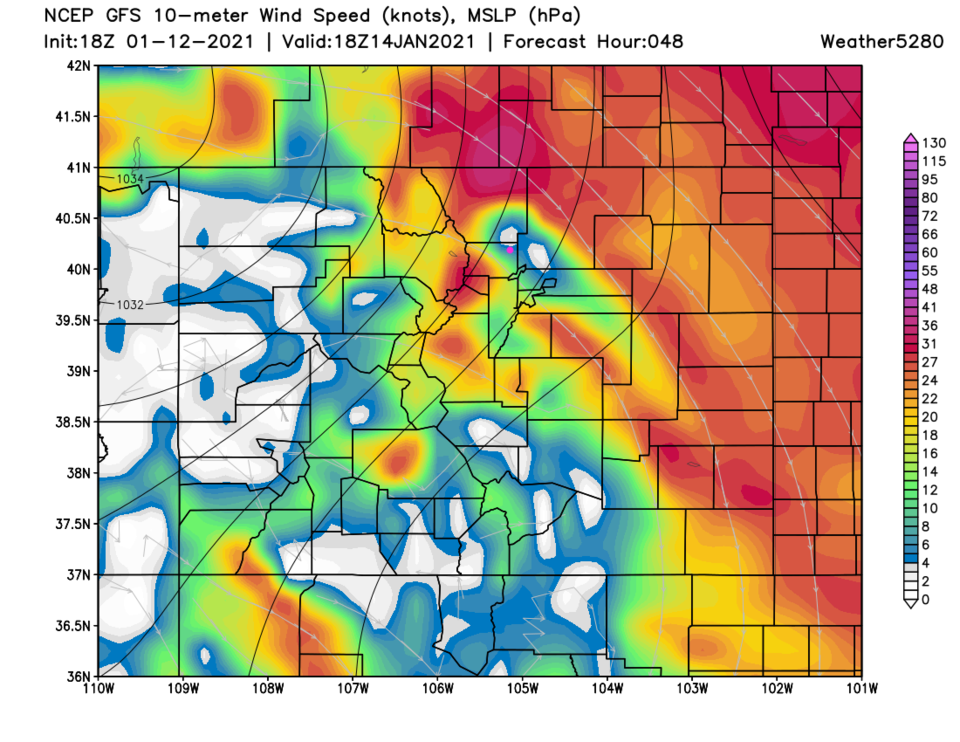 Figure 1 update: the 10m wind speeds around noon Thursday from weathe5280.com and the GFS.

We have pretty mild temperatures ahead (for January at least) and a chance of rain/snow on the weekend (it is not a large storm as it looks now - Figure 2 update).  There is a possibility of a coating of snow over the next 6 days (Figure 3 update).  But then precipitation might come as light rain with temperatures in the 40's expected over the weekend. 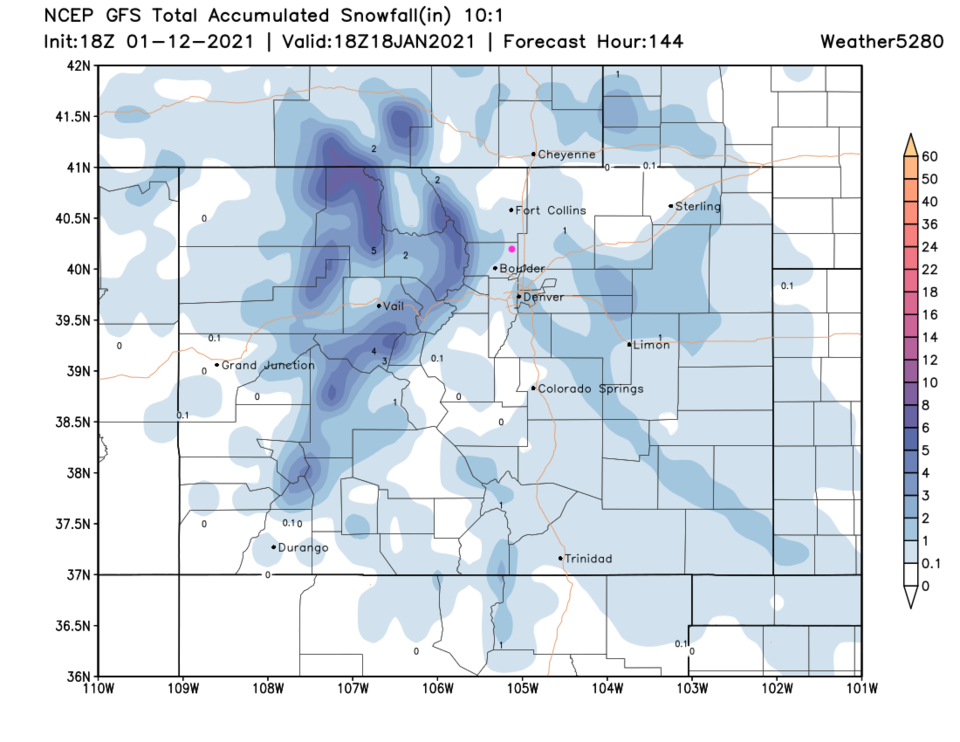 The upper air trough has now dug down to the Four Corners area and will be sending a brief shot of up slope flow into the Front Range communities Saturday PM (Figure 1 below). 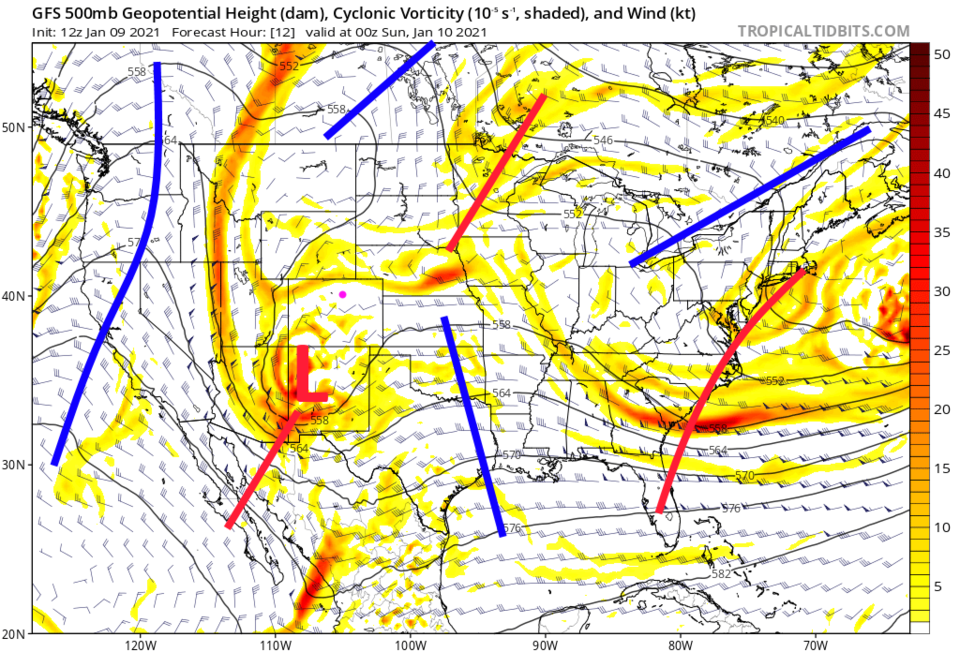 Figure 1: The 500mb upper air forecast map for Saturday PM from the GFS and tropicaltidbits.com

The bulk of the light snow will fall over the south-central counties of Colorado, but some will accumulate around Longmont (Figure 2). 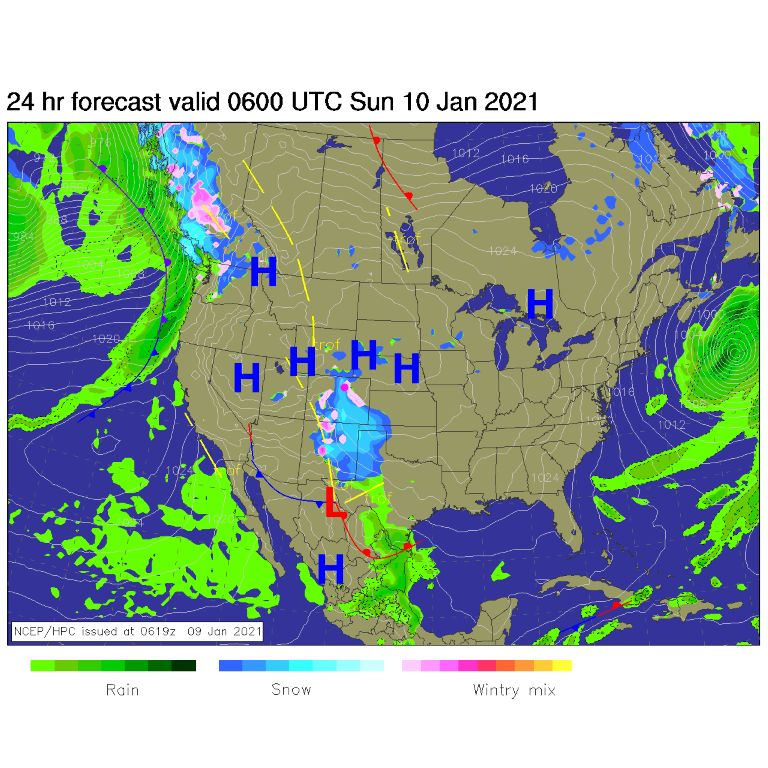 Figure 3: The 10-day graphical forecast from weather5280.com for Longmont.

I'm comfortable with about 1.5 to 2.5 inches around here. 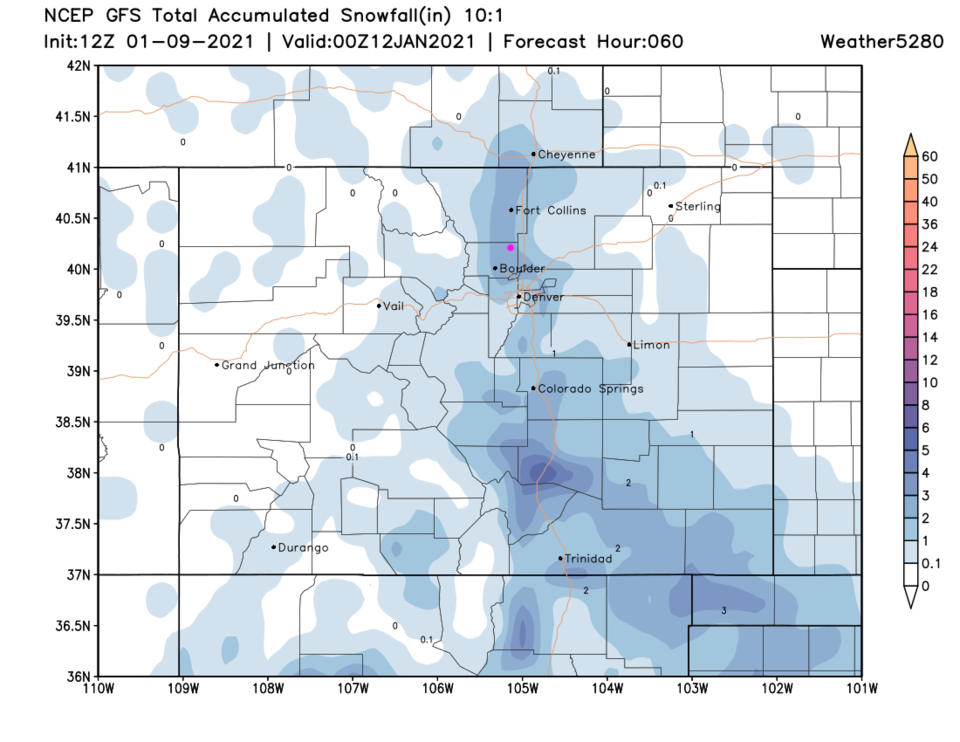 Figure 4: The three-day (10:1 ratio) total snowfall forecast from the GFS and weather5280.com 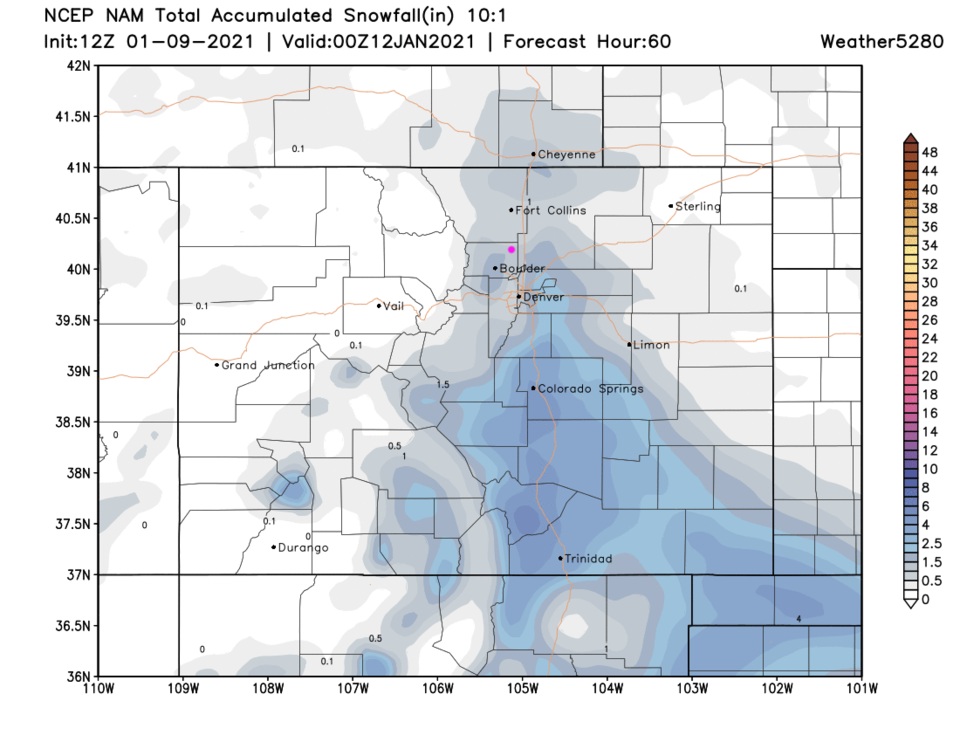 Figure 5: The three-day (10:1 ratio) total snowfall forecast from the NAM and weather5280.com 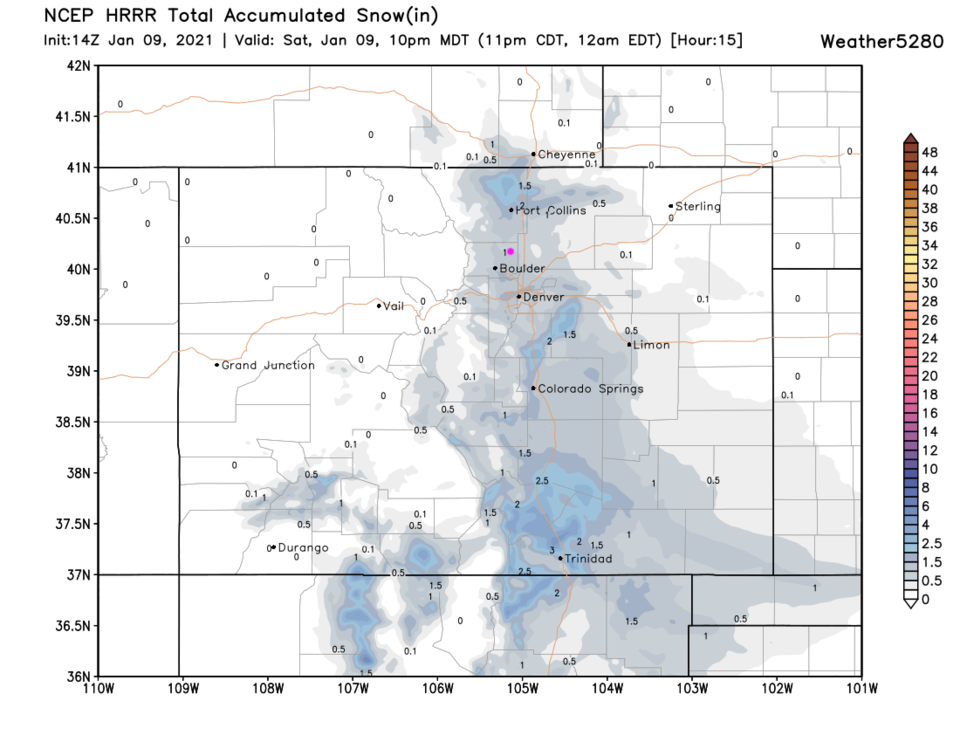 The weather becomes quiet again next week. Temperatures trend toward the high end of normal for this time of year.  There are no suspicious storms to watch for in the models — yet!

After a cloudy start, sun returns

Times of sun and clouds

Intervals of clouds and sun

Colder with areas of low clouds